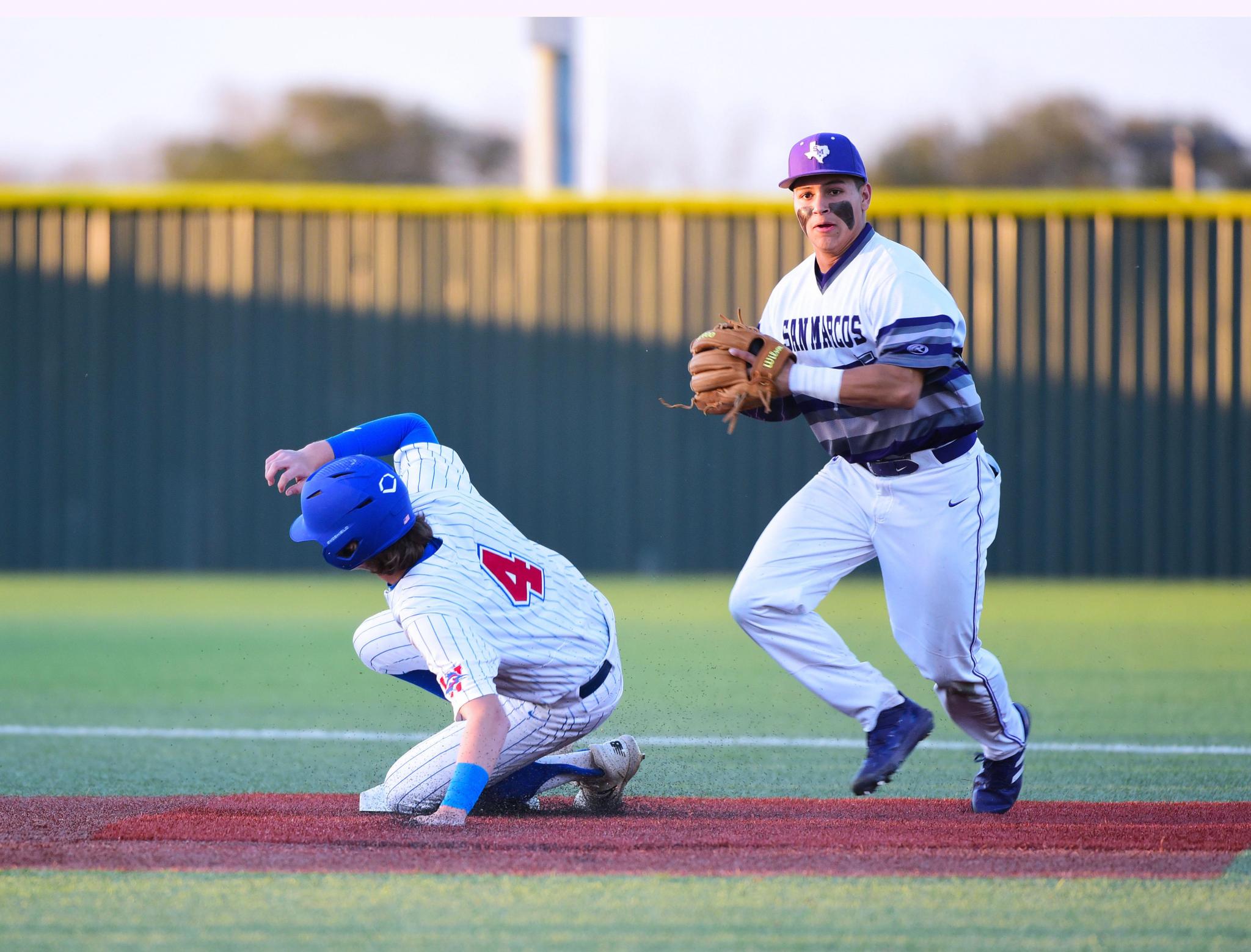 The Rattlers were snakebit against the Chaparrals Tuesday night.

San Marcos fell 5-1 to Austin Westlake to close out its district-opening series against the Chaps. A mix of missed opportunities in the batter’s box and fielding errors with runners on base led to the loss.

“They’re sad and disappointed that they lost, but they competed, they competed hard,” head coach Bryan Webb said. “(The) breaks didn’t go our way, balls didn’t fall where we wanted them and that’s baseball. Until we get them to start doing the little things right they’re going to fall against us. We’re heading in the right direction. (Westlake’s) a good team, they’re 12 and two, they’re a top 15 team and they exploited our weaknesses tonight.”

Westlake got in front early, taking the lead in the second inning and never giving it up. The Chaps’ Cole May opened up the inning with a leadoff triple, and Nathan Duvall drove him in on an RBI single to left field.

The Rattlers forced a grounder but made an error on a double play attempt, and then hit the next Westlake batter with a pitch to load the bases. San Marcos (8-9-1, 0-2 District 26-6A) was able to keep the damage minimal, only allowing one of the three runners on base to score and stopping the Chap lead at two.

Westlake (12-2, 2-0) would once again get their offense moving in the fourth inning, loading the bases and putting a run on the board off a sacrifice groundout. The Rattlers would respond in the bottom of the inning and load the bases, but only scored one run due to multiple strikeouts to keep the Chap lead at 3-1.

Westlake would go back to work on the scoreboard in the fifth and sixth innings, driving in two more runs off an RBI single and triple to push the Chap lead to 5-1.

“(Westlake) showed (the players) what we need to work on and there’s no youth anymore. They’ve all been here. They’ve all been through it. They’ve been to the Dallas tournament,” Webb said. “They played the teams and we’ve just got to take advantage of opportunities when we get it. And we didn’t do it tonight. I mean, we tried, we squared some balls up, they made some plays and forced some plays in there and that’s what baseball is about. They made a play when they had to, and we didn’t.”

The purple and white gave their best offensive effort in the bottom of the fifth. The Rattlers loaded the bases and believed they’d driven in their second run of the game, but Reagan Chomel was called out on a controversial call at home plate to end the inning. San Marcos would’ve had multiple baserunners and a chance to steal momentum from Westlake depending on the call.

The Chaps would ride the momentum of the out though, and close out the seventh inning shutting out the Rattlers and completing their series-clinching win.

“They’ve got some guys over there (Hays) that can play, we know that,” Webb said. “No matter what the records are, no matter who’s up or who’s down, you know, both teams are gonna play their best game and it’s a fun series. It’s a rivalry series. And you know, it’s a big series and we look forward to going over there Tuesday night and them coming (here) next Friday. For 16 years, it’s been a blast, so we look forward to it.”