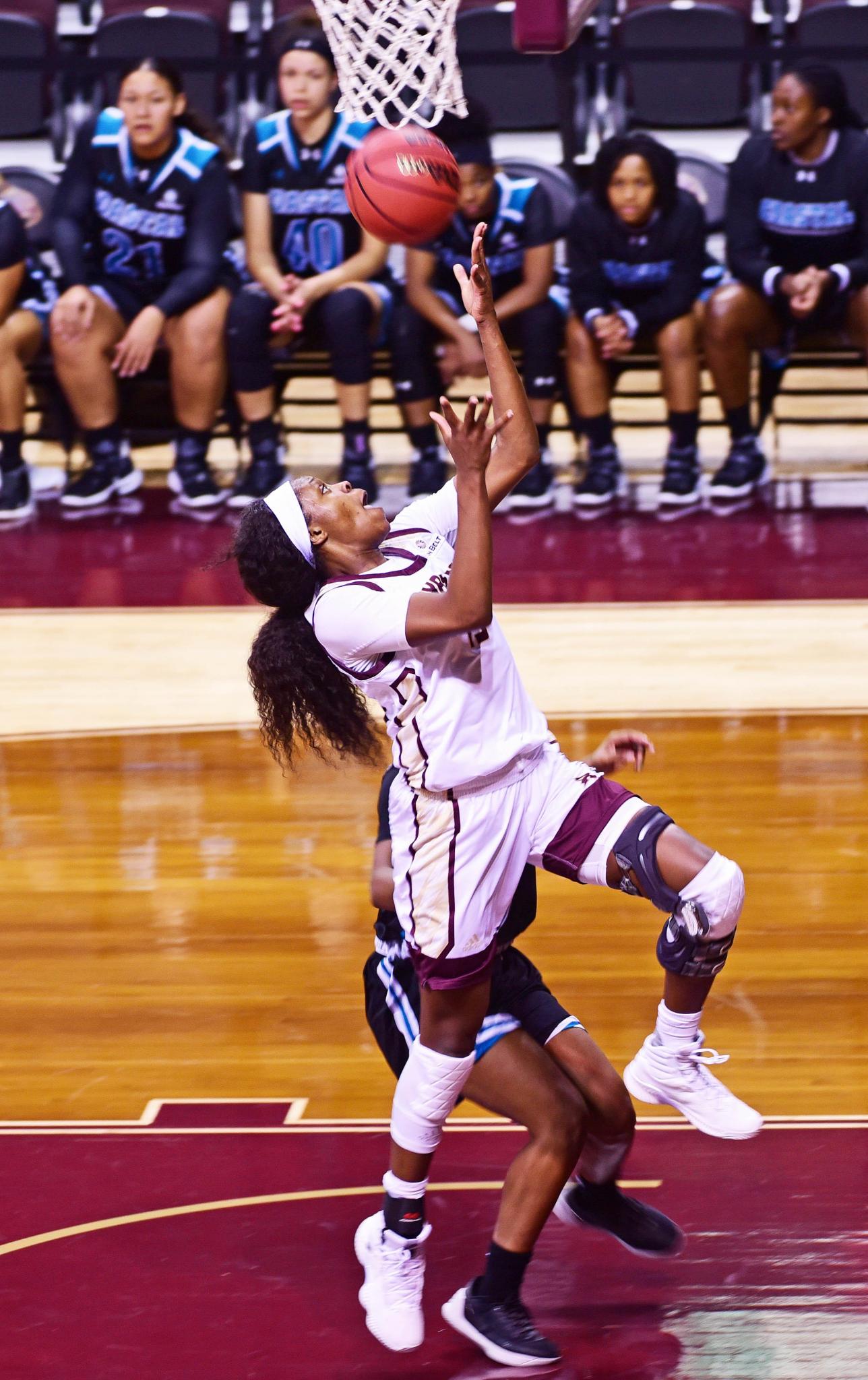 Rebounder: Zandra Emanuel makes the most of extra opportunities

Sky’Lynn Holmes laid on the ground, pointing to her knee in pain.

The Troy senior forward went up for a rebound inside Strahan Arena in the Trojans’ game against Texas State on Feb. 28, but landed awkwardly and fell to the floor. Coaches and trainers rushed to her side and placed her leg in an aircast before carrying her to the locker room. With three games left, her season was likely over.

Bobcats redshirt senior forward Zandra Emanuel huddled her team together on the sideline and led them in a prayer for Holmes’ wellbeing. She went through something similar just one year ago.

Emanuel was off to a solid start at Arkansas State on Jan. 11, 2018, collecting two points and a season-high-tying three rebounds in six minutes off the bench. She went up for a layup during the third quarter, but was blocked by Red Wolves forward Lauren Bradshaw. Emanuel’s left knee gave out when she landed, tearing her ACL and meniscus.

“I didn’t understand,” Emanuel said. “I questioned God. I was like, ‘Why? Why me of all people?’”

The post took the long way to get to this point of her career. And now she might have met the end of the road.

At 6 feet tall, Emanuel is the youngest and shortest sibling of five older brothers. She grew up in inner-city East Houston, where Emanuel’s brothers would take their little sister to the neighborhood park to play basketball.

“That’s my girl!” Zandra’s mother would tell the boys. “Don’t be rough with her!”

They never listened. Emanuel learned early on that basketball is a contact sport. The lesson in physicality helped her in high school, where she averaged 9.8 points and 10.8 rebounds per game for C.E. King.

But at the end of her senior year, Emanuel didn’t have many looks from college teams.

“Coming out of high school, I wasn’t a player that was top-of-the-radar for the class of ‘14,” Emanuel said. “So, honestly, I wasn’t even going to play ball.”

Emanuel wanted to become a pediatrician. She initially considered attending Texas State as a pre-med student and trying out to walk on the team. But she loved basketball too much to have an uncertain future in it. Instead, she accepted an offer to play for Coastal Bend Community College in Beeville.

“I just took a leap of faith,” Emanuel said. “I went on a visit to see what it was about. I was like, ‘Well, I can go here for two years, get my associate’s (degree) and still play ball and then maybe something else will open.’”

It happened just as she said. Emanuel became the leading junior college rebounder in her sophomore season, grabbing 428 rebounds in 29 games as a starter. Her coach at the time, Derrick Jackson mentioned how impressive her stats were. The forward shrugged it off.

Jackson told her that she would likely get offers from four-year schools. It caught Emanuel off guard. She felt like she hadn’t done anything out of the ordinary. She was just playing ball.

In reality, she had spent countless hours putting in extra work to be a menace on the boards. Coaches took notice. She received a handful of offers from Division I schools. One of them was Texas State.

“I’ve always struggled in rebounding categories as a head coach here at Texas State. So, I recognized I had to get better,” head coach Zenarae Antoine said. “And so, that’s literally what you do, is you go on, you take a look at the national junior college, NJCAA rankings. And you can kind of see who’s scoring, what they’re doing. So, that’s how she was initially on my radar, just the fact that she was a heck of a rebounder.”

The two bonded over their Houston roots. Antoine was impressed with the sophomore’s grades — “it makes sense that she’s a great rebounder because she works so hard academically” — which had improved from high school to junior college. Emanuel agreed to join the Bobcats.

Antoine was concerned the post was too raw to gain meaningful playing time during her first season with the maroon and gold and suggested Emanuel redshirt her first year. Emanuel didn’t like the idea.

“I didn’t handle it well,” Emanuel said. “I was coming from JUCO and I was playing an excess amount of minutes, like I barely got off the court. And so, to come in here and have to sit and not play the game that had gotten me to be the No. 1 rebounder, I didn’t take it very well. I didn’t understand why.”

The head coach told her she was welcome to fight for her minutes, but that it wouldn’t be easy. Emanuel took the chance.

She mostly lost the fight, stuck on the bench for a team with veteran players to spare. Emanuel rarely saw the floor during her junior season, averaging 2.5 points, 2.7 rebounds and 8.7 minutes in 15 games. She saw her playing decrease to 5.1 minutes per game as a senior, playing in just eight games before traveling to Arkansas State.

Emanuel could have let the knee injuries be the punctuation to her basketball career. She could have spent the remainder of her time in San Marcos focusing on her classes and preparing for medical school. But she wanted another chance.

Antoine wanted another chance with her, too. She knew Emanuel hadn’t reached her ceiling as a player yet. The team appealed for a medical hardship redshirt for Emanuel. The NCAA granted it, giving the senior one more year of eligibility.

The forward rehabilitated and was medically cleared in time for the start of this season.

This year, Emanuel’s all about getting extra chances for herself and her team, helping Texas State to a 9-8 Sun Belt record. She averages 21.7 minutes and has started in 28 games, missing just one. She leads the team with 78 offensive rebounds and 6.4 total rebounds per game.

She’s become the vocal leader of the Bobcats.

“She’s the one player that will get in someone’s face in practice when things aren’t going well,” Antoine said. “When our practice starts to go south, she’s the one that’s like, ‘Can we huddle?’ And she’s the one that will huddle the group. And she’ll get after them … She knows if you’re working hard or not.”

The senior described herself as "the mother" of the team. Most players know she’s someone they can talk through their issues with.

Jazza Johns, a junior forward and fellow junior college transfer who arrived at Texas State this season, went through a lot of the same issues Emanuel faced. Emanuel made the transition easier for her.

“She’s a very encouraging person,” Johns said. “Coming from a JUCO, knowing I played like unlimited minutes and coming here and I’m sitting on the bench. (Emanuel) was somebody I always went to talk to because we have the same type of background … So, she prepared me and helped me understand like, ‘Your time gon’ come.’”

Emanuel graduated in December with a bachelor’s degree in exercise and sports science. She’s spending her final semester in San Marcos finishing the last courses she needs for medical school and studying for the Medical College Admission Test.

Antoine said she’ll miss the forward. Unless the head coach signs another junior college student-athlete, she won’t have any players from her home city on her roster next season.

“She’s got a phenomenal attitude towards life,” Antoine said. “She’s been knocked down a lot and she’s picked herself back up. And she’s just persevered through a lot of different situations.”

The post now wears a padded white sleeve and a metal brace over her left knee. The injury still nags her and she’s usually playing in pain. But she’s not going to let it stop her from contending for a conference championship. She’s going to keep rebounding until she wins.

“Whatever I do, I do it with full effort,” Emanuel said. “I do it all out. I don’t half do it. I just give it my all because I want great results.”