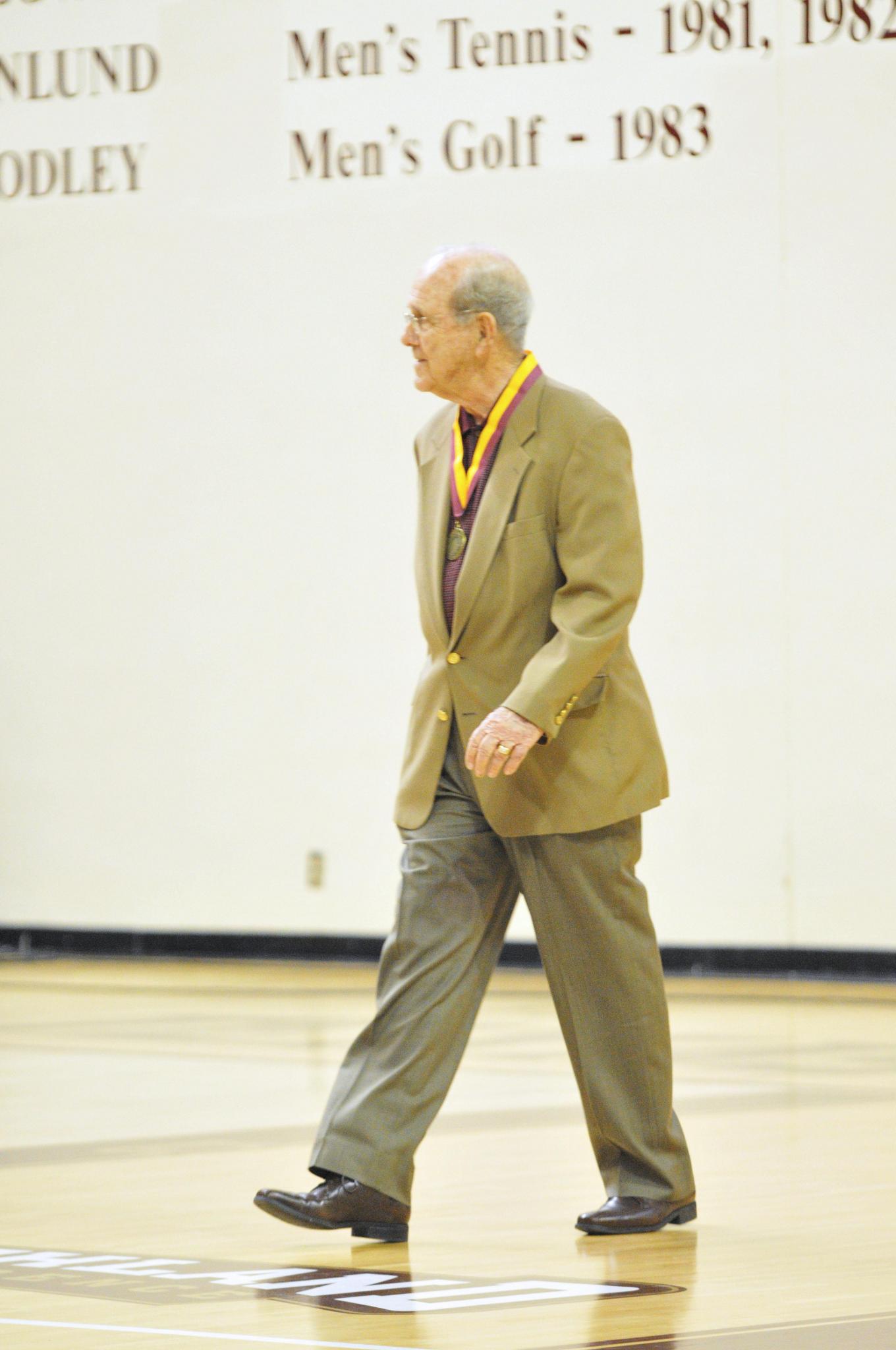 James Duncan wouldn’t be a Bobcat if it weren’t for Vernon McDonald.

Duncan was a senior football and basketball player at Ganado High School in 1968, deciding where he would go after graduation. He had an offer to play quarterback for Southwest Texas State from head football coach Bill Miller, though it was only a half-scholarship.

Ganado’s head basketball coach, Connie Miller, turned to McDonald, who he used to play for at the university. Miller vouched for Duncan. Without seeing Duncan play in person or watching any film on him, McDonald offered the senior the other half-scholarship to join the Bobcat basketball team. Duncan jumped at the chance.

“I had a chance to go to West Point, but I told the congressmen when they came my house, ‘Gentlemen, I've never even been to Houston. I don't even know where the hell West Point is,’” Duncan said. “But I owe Coach Mac and I owe Bill Miller everything for giving me the opportunity to come here. Otherwise I'd have been going to a boarding junior college and pumping gas on the weekends.”

McDonald passed away Monday at the age of 90. He spent more than a third of his life working with the Bobcats’ athletic department.

He began at Southwest Texas State as a point guard in 1949, and gained All-Lone Star Conference recognition three times in his career. McDonald graduated with a Bachelor of Arts degree in physical education in 1952, and spent the next year teaching at Eagle Pass High School.

He returned to the Bobcats in 1952 as an assistant football and basketball coach while simultaneously earning his master’s degree in education. He remained in the role for the next eight years, helping the basketball team win the NAIA championship in 1960.

Dr. Bobby Patton became the team’s athletic trainer and befriended McDonald that same year. He noted the was always easy to talk to.

“At first I thought, 'Well this guy talks too much.' And sure enough, that's what he did,” Patton said. “You know, most people in those days were a little leery of going up to (former head basketball coach Milton) Jowers and talking to him because he was kind of gruff. But Vernon would be with him and he would have Coach Jowers rolling his eyes with a story. They were great friends and great companions and worked together with basketball.”

When Jowers became Southwest Texas State’s athletic director in 1961, he tabbed McDonald as his replacement. McDonald became the No. 2 leader in all-time wins for the Bobcats in 16 seasons with a 226-192 record at the helm — only behind Jowers at 287-106.

Patton said McDonald would keep coins in his pockets during games — quarters, silver dollars, 50-cent pieces. During timeouts, McDonald would lay the coins on the hardwood and diagram plays with them for his players.

“I've never seen another coach do that, you know. I worked up there 51 years,” Patton said. “The thing about his teams that I guess is noticeable, he lost a lot of games by one or two points. He would have, probably, a better record than Coach Jowers if he would have scored one more basket several many times. And that was disappointing, but yet very entertaining.”

McDonald never completely walked away from football, either. Even after he took over the basketball team, he still filmed games for the football team.

James Duncan and the Bobcats were scheduled to play Texas A&I in the Lone Star Conference Championship Game in 1971 in Kingsville. The game broke the conference’s all-time attendance record. The stadium was so full that some spectators had to stand on the sidelines to watch.

McDonald used some of the film he brought to document it on camera before the game kicked off. Duncan still holds a picture of the crowd from that night.

With 20 seconds remaining in the game, the Bobcats were in position to make the game-winning score.

“Milton Jowers' son, Jimmy Jowers, was going to have to try to kick the field goal. They couldn't find him because he was underneath the bleachers, puking his guts out,” Duncan said. “So anyway, 3rd and goal from the seven, I scooted it in (for the win).”

Just as the ball snapped, McDonald ran out of film.

“I never got to see myself score.”

McDonald was promoted to assistant athletic director in 1977 and retired from the school in 1988. Duncan and Patton stayed in touch with him, joining him for breakfast at Whataburger every Tuesday along with other alumni from Bobcat athletics. Patton said he was still coming as recently as three weeks ago. The cashiers missed him when he stopped showing up.

"Vernon McDonald was all Bobcat. I am not sure that anyone experienced or knew more about the history of Bobcat athletics than Coach McDonald," Texas State athletic director Dr. Larry Teis said. "McDonald was both a great player and an outstanding coach for the university, but he was much more than that. I think his biggest gift was his ability to bring people together. He often drew a crowd and most likely, that crowd was going to hear about the Bobcats. He was a unifier and he had his own way of making everyone feel special. He is going to be greatly missed by anyone who was fortunate enough to interact with him."