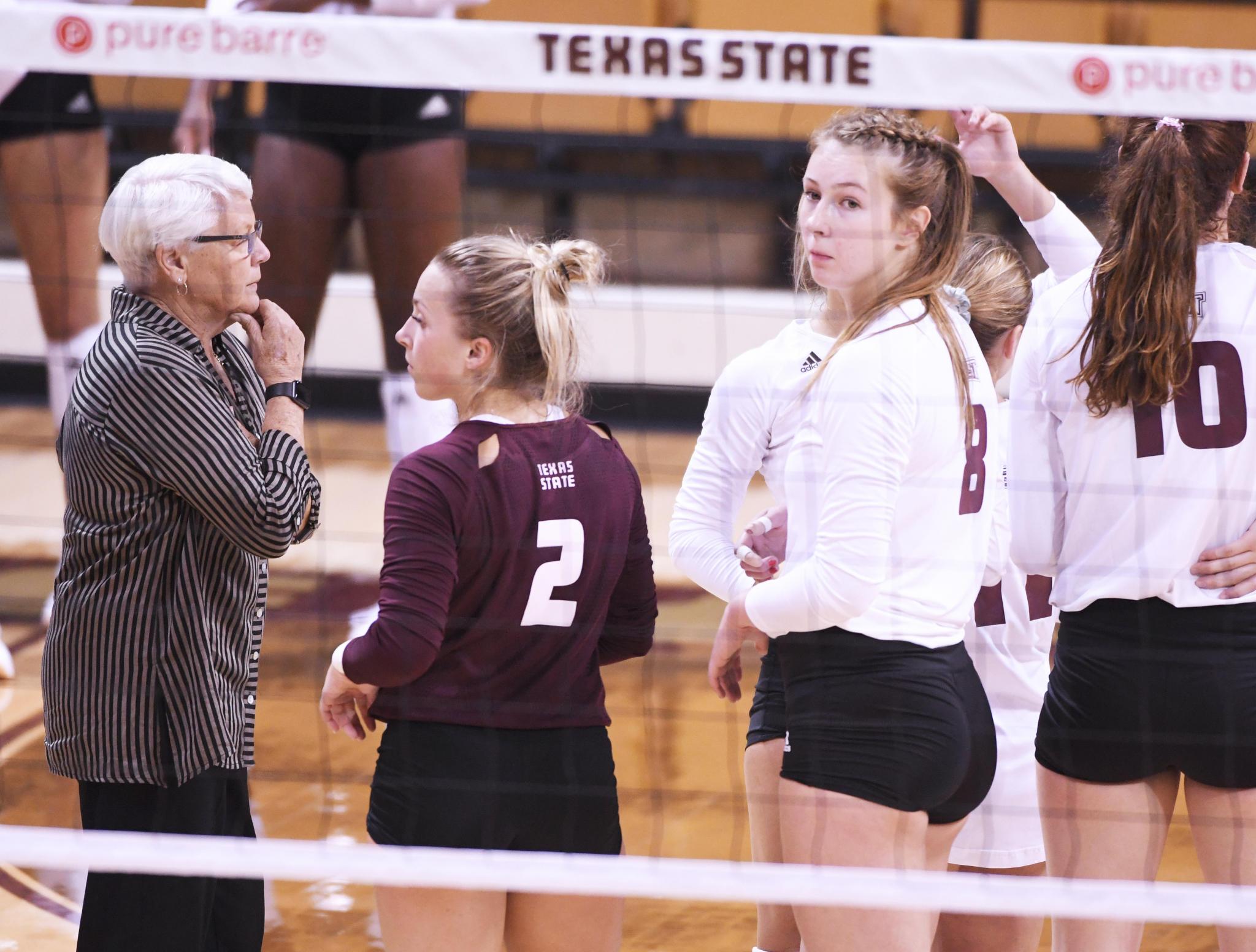 The Bobcats took 98 shots during their match against the Owls inside Strahan Arena on Tuesday. Thirty-one of them went for errors and the team registered a -.061 hitting percentage. The visitors swung for .260 percent and claimed every set of the match for a 3-0 (25-13, 25-10, 25-21) victory.

The first frame was tightly contested at the beginning, as the teams were knotted up at 8-8. Rice took the first significant lead, going up by four with every point scored on a Bobcat error. Texas State cut it to two points, but never got closer.

Up 15-12, Owls junior outside hitter Nicole Lennon spiked three consecutive kills into the hardwood to start a 9-0 run for the visitors. A service error ended the run at set point, sending senior libero Micah Dinwiddie to the service stripe. Dinwiddie’s serve failed to clear the net, awarding Rice the first game, 25-13.

The hosts came out flat in the next frame. Sophomore setter Emily DeWalt, who started in the first set, did not play in the second. The Owls scored points in bunches of three or more six times during the game. The Bobcats strung multiple points together just once and committed eleven errors — including two while serving and two while setting — falling 25-10 to the visitors.

Texas State fell behind 7-4 early in the final set, but found its footing to keep pace. DeWalt returned to the court and helped the team battle back to take a 14-13 lead, finding sophomore middle blocker Jillian Slaughter for a kill. Rice tied it again on the next play, but DeWalt handed out another assist to senior outside hitter Cheyenne Huskey to stay in front.

The Bobcats never led again. The Owls went on a 4-0 run to go ahead by three points. The hosts countered with two, but the visitors scored another four unanswered to lead 22-17. Two service errors from Rice and kills from Slaughter and sophomore outside hitter Kenedi Rutherford helped Texas State cut it to 24-21, but a spike from freshman outside hitter Courtney Heiser fell out of bounds to seal the sweep.

It was the first time the teams had played each other since the first round of the NCAA Tournament in Austin on Nov. 29, 2018, where the maroon and gold took a 3-1 victory. Huskey led the team with seven kills and 12 attacking errors. Slaughter had the top hitting average at .250 percent. DeWalt dished out a team-best 18 assists. Rice recorded eight blocks and six aces during the match. Texas State rejected just one shot and did not register an ace.

No one from the team was made available to the media after the game, including head coach Karen Chisum. The Bobcats have dropped their last nine sets, dating back to the second frame against No. 14 USC on Friday. It’s the first time since 2012 the team dropped three-straight home matches.

Texas State has struggled before, though, losing its first three matches of the 2018 season and going 27-4 the rest of the year. The teams it's faced haven’t been easy, either, as USC (658), Rice (24) and Northern Iowa (16) each received points in the week one AVCA Poll on Tuesday.

The Bobcats will look to figure things out on the west coast over the weekend as they travel to Long Beach, California for the Mizuno Classic. Texas State will take on Long Beach State on Thursday at 10 p.m., UCLA on Friday at 7 p.m. and Georgia on Saturday at 6:30 p.m. The schedule should lighten up a bit as none of the schools received points in the most recent poll.