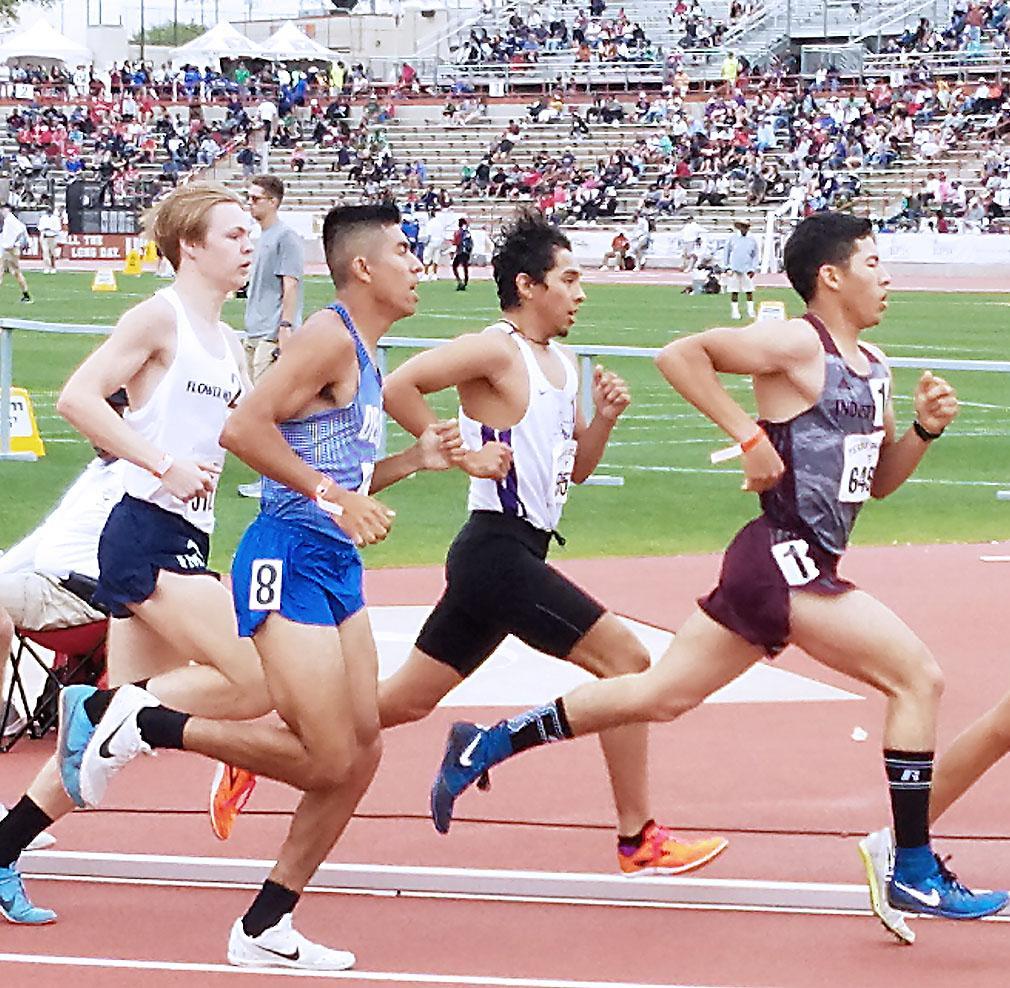 He was heading north on I-35 on Friday with his head coach, Michael Morris. He was nervous. Too nervous to speak, anyways. These weren’t the nerves that typical high school seniors get — he wasn’t fretting over where he would go to college or what he wanted to do. He decided that already.

This was more like stage fright. He was prepared for the moment, but didn’t know if he was ready. The pressure to perform crushed him. And speaking on it only added to the heaviness.

But once Lopez stepped foot inside Mike A. Myers Stadium for his 1,600-meter race at the 2019 92nd Clyde Littlefield Texas Relays in Austin, the weight was lifted off his shoulders.

“I realized it’s nothing different, it’s just another track meet,” Lopez said. “So, I had to keep calm and just do what I do.”

What Lopez does is push forward, always at full throttle.

His parents, stepfather Jonathan Torres and mother Lauren Torres, described him as a hyper child. They tried wearing him out with football and baseball. He had the athleticism for both but didn’t excel with the ball in his hands.

Then Jonathan made a discovery.

“One day (Jonathan and Lopez) went out for a run,” Lauren said. Lopez returned, rollicking. “(Jonathan) was like ‘This kid’s gonna be a miler. I’m gonna make a miler out of him.’ And sure enough, he did.”

The pair began training together at Core Running Company, practicing across the street at Ramon Lucio Park and competing in local races in San Marcos. Torres had Lopez focus on the mile. It was the perfect distance for Lopez.

Jonathan, a former high school basketball and soccer player, enjoyed getting back in shape. Lopez just enjoyed spending time with his parent.

As Lopez aged, his technique improved. His passion, however, occasionally waned.

“We butted heads a lot because I felt like he had a really good talent and sometimes he wanted to do other things,” Torres said. “I was like ‘Man, you’ve got a God-gifted ability, maybe we should go in this direction.’ But I didn’t want to force him into running. I wanted him to choose it. I think he chose the right sport.”

Morris could feel it. The coach saw Lopez’s potential in 2016 at the 27-5A district meet when the then-freshman came up just 3.56 seconds short of eclipsing the 2-minute mark in the 800 meters —  an impressive time for a first-year athlete.

“He’s a stubborn kid,” Morris said. “He’s stubborn both on and off the track. It’s been a struggle with him at times. But he’s always pushed himself and always had that internal drive that I kind of recognized.

“And as a coach, it’s always been my job to pull that drive out. And sometimes they don’t always want to have that happen to them, sometimes they want to resist that a little bit. But I think once he learned that’s what I was doing, he started giving into it, his natural talent started to come through.”

Lopez’s goal was to move out of state after graduating high school. He considered joining the Coast Guard. His stepfather and uncle are both veterans of the Air Force. Joining the military would have given him the chance to travel.

But as Lopez began to heed Morris’ coaching, his times began to drop. The two discussed what it would to take to be a collegiate student-athlete. His parents encouraged him to pursue a degree.

“If your feet can get you somewhere and it’s going to get yourself an education, go for it,” Lauren said. “That was my major thing, was just if it gets you there, take it. Run with it.”

Lopez made it his mission to earn an athletic scholarship, hopefully from an out-of-state school. That same year, he added another objective for himself.

“Sophomore year, I was on a team of nothing but seniors. We ran the 4x(800-meter relay),” Lopez said. “Just running there for the first time, it was a goal for me to make it again.”

The first step for Lopez to reach his goals was improving his diet. Hot Cheetos are his favorite food. The only sentence in his Twitter bio reads “I love Hot Cheetos.” He used to buy a bag before every track meet and ate them afterward as a reward for finishing his race. But Hot Cheetos don’t help you run, so they had to go. So did steak. It was good, but it was heavy, too.

He also had to improve his sleeping habits. He’d stay up until midnight some school nights. He tries to be in bed by 10 p.m. now, if not earlier. On Fridays, he wakes up at 4 a.m. and drives to Austin to train with RAW Running, an Under Armour-backed running group.

The strict dieting, the new curfews, the early-morning and late-afternoon practices — it all got him where he wanted to go.

On Wednesday, Lopez committed to Hastings College. He received a full ride from the Broncos, located in Hastings, Nebraska, crossing off his bucket-list item.

“I don’t want to say it’s just because of the money, but they did offer me full tuition, so I’m really blessed to receive that,” Lopez said. “But also the team, they’re really tight, so I like it. It reminded me of the family that I have down here from my team.”

Lopez signed his letter of intent at Core Running Company. After the ink dried, he and Jonathan went across the street to Ramon Lucio Park one more time for a 200-meter dash.

“(Lopez is) my running buddy,” Torres said. “I felt the need to (race him) one more time because he’s going off to college and this may not come around again. It got me a little emotional, I had to break away for a little bit. I’m really proud of him. He’s worked really hard to accomplish all of his goals.”

.@SMHSRuns senior Anthony Lopez and his stepfather, Jonathan Torres, finish of a 200-meter dash at Ramon Lucio Park. The pair have run the track dozens of times.

Lopez signed a letter of intent today with Hastings College. This is likely their last race for a while @smdrsports pic.twitter.com/dJxXp6NyJ7

Halfway into the sprint, Lopez established a firm lead. He looked over his right shoulder to see how far back Torres was and slowed down to let him go in front. Torres crossed the finish line, then Lopez shortly after. Winning races doesn’t matter to Lopez, as long as he’s first.

“To me, I feel like sometimes our family is a little bit left out,” Lopez said. “We don’t get the recognition or the things that we should get. We work our butts off hard, super hard.

On March 21, Lopez received a text from Morris. The senior was named among the initial qualifiers for the 1,600 meters at the Texas Relays.

“He was just excited about it,” Morris said. “I see it today and I’ve seen it all this week. He’s just been lit up all week with the excitement of what he’s about to do.”

Lopez took his mark at the Mike A. Myers track at 4 p.m. Friday. The starting pistol popped and he soon emerged with the leading pack of runners.

He was ready to make his move to the front entering his third lap. But he found himself boxed in by his opponents and couldn’t get to the outside edge. He lost his position in the final lap and crossed the finish line at 4:28.06, placing 11th in his heat and 24th overall.

"(#TexasRelays2019 was) the big goal I wanted ... I was just proud to be in this race. I just went out there and worked." @smdrsports pic.twitter.com/CCAnWWQXMl

The senior was visibly frustrated as he walked off the track. Though it was a personal record, it wasn’t the time he wanted. He shrugged it off and said he’ll get it next time.

Was it everything he thought it would be? He choked up a bit, taking in the thousands of spectators in the stands as he pondered his answer.

The Texas Relays was a literal and figurative milestone for Lopez. He’ll have more to come.