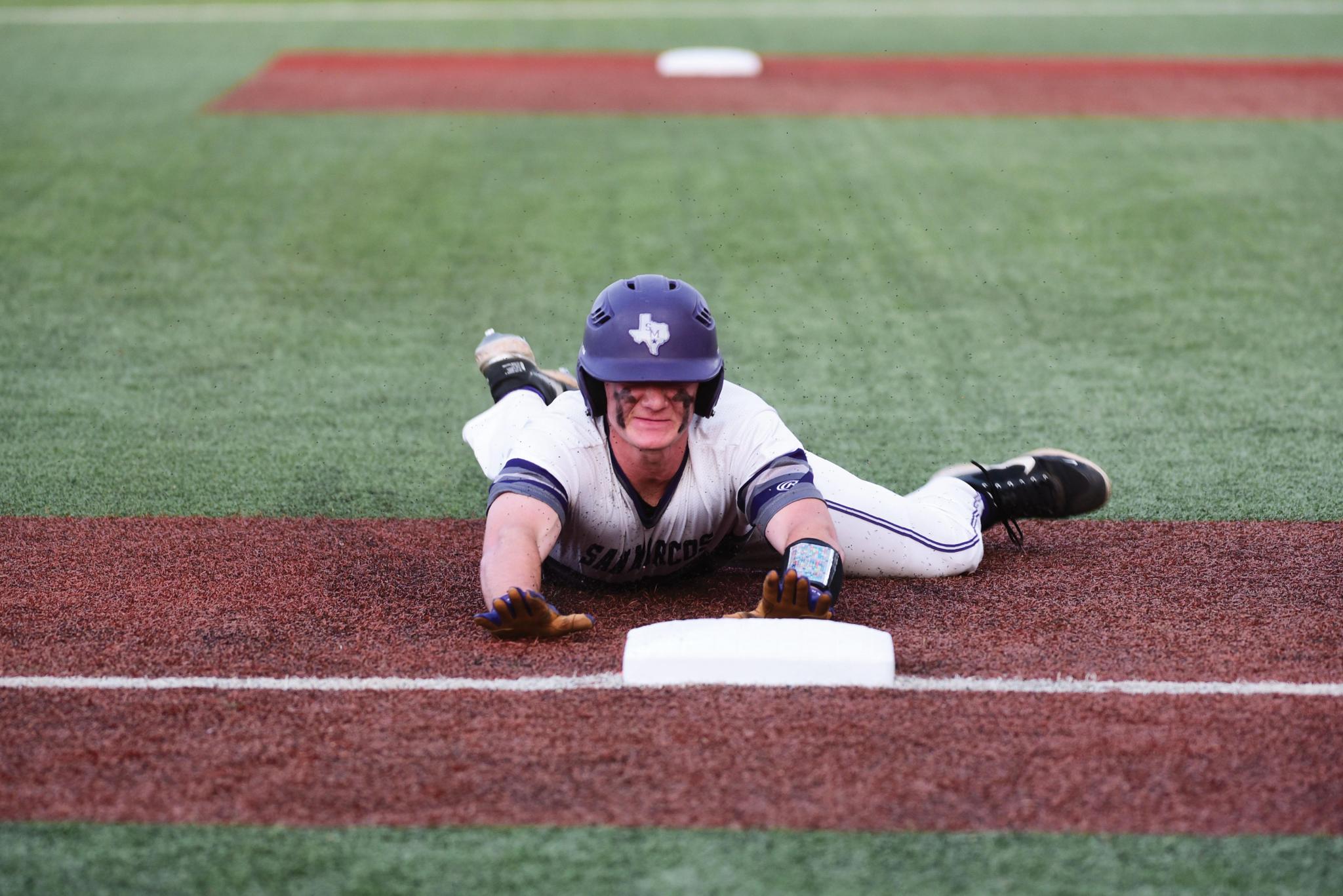 San Marcos got the response it was looking for Tuesday night.

After the Rattlers dropped the second game of their series with Austin High last week, 9-4, the purple and white knew they had to change some things up. While some of it was finally executing things the team had been working on for a while, San Marcos came out with a different batting order that paid dividends.

The Rattlers had a dominant day at the plate and on the mound, beating Del Valle 8-0 in seven innings at home.

“It was the response that we needed. We didn’t play very well Friday,” head coach Bryan Webb said. “Everything went wrong for us that could go wrong and you know, we went in and we had a lot of mental practices this week, really talking about what we need to do (and) how we need to do it. (We) really worked situations and the mental part of the game and it panned out for us.”

The lineup changes included junior Ryan Hix being moved into the leadoff spot, where he drew two walks and crossed home plate multiple times. Junior Major Pellien had been near the bottom of the lineup for most of the season, but was moved to the four-hole and drove in three runs throughout the night. Senior Johnny Pardo and sophomore Reagan Chomel were moved down, still providing firepower later in the order.

The difference for the Rattler batters has been in their approaches — something they’ve been working on all season that finally allowed the team to have the explosive offensive evening it’s been looking for.

“We kind of talked (about our approaches),” sophomore Kutter Gage Webb said. “We get up there and we start trying too hard and (if) we just go up there and relax and do our job we’re all pretty solid, pretty good ballplayers. So we go out there and we do our thing we’re gonna be alright.“

“We just gotta go up there with the right attitude, and (be) throwing haymakers. Just gotta swing and swing hard,” Pellien added.

While the purple and white exploded throughout the game at the plate tonight, the win wouldn’t have been possible without the shutout on the mound from junior ace Tito Santos.

Santos pitched all seven innings against Del Valle (5-14, 1-6 District 26-6A) Tuesday evening, marking a big step for the right-handed pitcher after his offseason surgery. Santos stranded runners on base throughout the night, closing out multiple innings with strikeouts with runners in scoring position.

“Well, it’s confidence when he’s on the mound. Our kids play behind him, they love the kid,” Bryan Webb said. “Like I told him the other day, ‘There’s no doubt in my mind that you give everything you got.’ Sometimes he tries too hard, but we know when we got Tito on the mound, we’re gonna be in a ballgame. And you know, I don’t think he’s ever had a really terrible outing. He’s had some bad outings, but not anything terrible. He’s a competitor and he went out tonight.

“This is probably his longest stint I’ve let him go and I still think he’s got more. I think he’s just about getting to where he was last year. But this is the time you want to do it. And you know, he kept our pitching staff and bullpen intact going into Friday. So you know, what a great outing he did have for us.”

San Marcos (12-12-1, 4-3) will look to continue to build off its momentum and finish off the series sweep against the Cardinals this Friday in Del Valle at 7 p.m.

“Eight runs is a lot, so when we go on the road you hope you get half those and play great defense,” Bryan Webb said. “We gotta go to Del Valle on Friday, their backs are against the wall and we know what we got coming towards us and we’re right in the middle of a thick playoff race right now, so anything can happen and we’ll see what happens on Friday.”

A previous version of this story incorrectly listed Major Pellien and Tito Santos as sophomores. The story has been corrected to list both players as juniors.