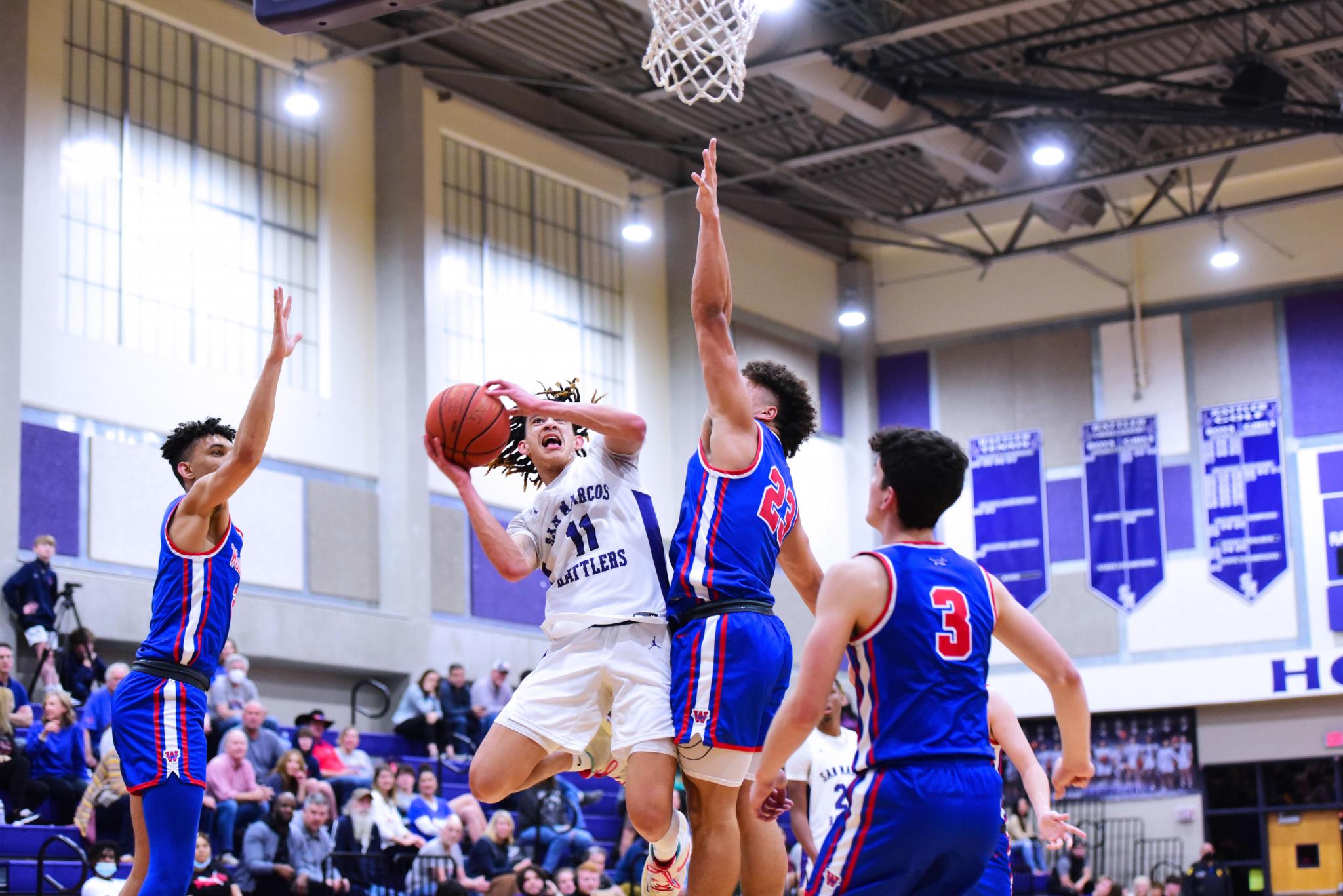 San Marcos got one last crack at Austin Westlake on Tuesday night inside the Snake Pit.

In a rare third matchup against a district opponent, the purple and white dropped their fourth and final game of District 26-6A play, 74-48.

The playoff-bound Rattlers kept the game competitive with multiple lead changes and momentum swings throughout the first half. Three-star junior guard Kaden Gumbs led the way on offense for San Marcos (27-9, 10-4 district) with 24 points off his pull-up jumpers and drives to the rim leading to athletic layups or passes to open shooters.

After about the three-minute mark in the second quarter, the Chaparrals began to pull away. Whether it was implementing their 2-1-2 zone or knowing San Marcos’ spots on certain offensive plays, the visitors were able to take control of the flow game and never let it go afterward.

“Well first of all, the guys started great, (in the) first quarter we were right there. You know, I think we had a lead in the 20s right before the end of the first quarter,” head coach Dan Miller said. “It shows we can play with a team that’s as good as Westlake, they’re phenomenal. But to beat a team like Westlake, you need four quarters of that focus, toughness and grittiness that we had in the first quarter.

“And then when they made some plays, (they) kind of pulled away a little bit with their lead. I think we got away from how we started the game with that aggression. So we got to learn from it.”

The Rattlers were also without starting junior forward Mateus Perkins for the game due to an injury — Perkins has been a “J-Y-D” or “Junkyard Dog” as Miller likes to call him throughout the year in the post.

It prompted senior center Jordan Mendoza to be inserted into the starting lineup, as well as highlighting junior forward Isaiah DeLeon’s importance off the bench.

“I was really proud of the way they battled. It’s a tough matchup because (Westlake’s) such a big team and you know, to have our starting five man out basically with (Mateus’ injury), the guys had to step up and guard some big guys,” Miller said. “I liked the grit and the battle that our posts had all night long, even though we gave up some things. I still would like to see us stand in there and meet them a little earlier (to) try to push them up before they get the ball.

“And then when they do grind us out down there, you know, take a few charges. And I felt that there were some opportunities both on the ball and away from the ball (to) take charges and we didn’t get that done tonight.”

Austin Westlake guard Jaden Greathouse helped lead the Chaparrals’ offensive potency, creating on his own as well as running the Chaparral offense dishing passes to shooters. Their stingy team defense continued after the break, stifling the Rattlers’ offensive production during the second half.

Despite the loss, the purple and white’s real season is just beginning. San Marcos is locked into the third seed of District 26-6A and will face Round Rock Westwood (28-5, 10-3 District 25-6A), the No. 2 seed in the bi-district, at Austin High next Tuesday at 7 p.m. While Miller is no stranger to postseason basketball, he’s excited to be back in a high school playoff week for the first time since 2014.

“The one thing that I do like about high school is you have a week to get ready. So we can learn from some of the good and bad in the regular season,” Miller said. “(There was) a lot of good. You know, I hate ending on this last night at home and dwelling on it. Westlake’s very good. We did a good job for three quarters. Fourth quarter, it got out of hand but we want to look at our good that we did and bring that in the playoffs and then look at just a few things that we need to improve like boxing out (and) being a little tougher on 50-50 balls.

“Tomorrow (we’re going to) get some skill work and things in, but then we’ll crank it up and be ready for Tuesday night. It’s ‘survive and advance’ (and) ‘one game at a time.’ I can’t wait to get us started.”