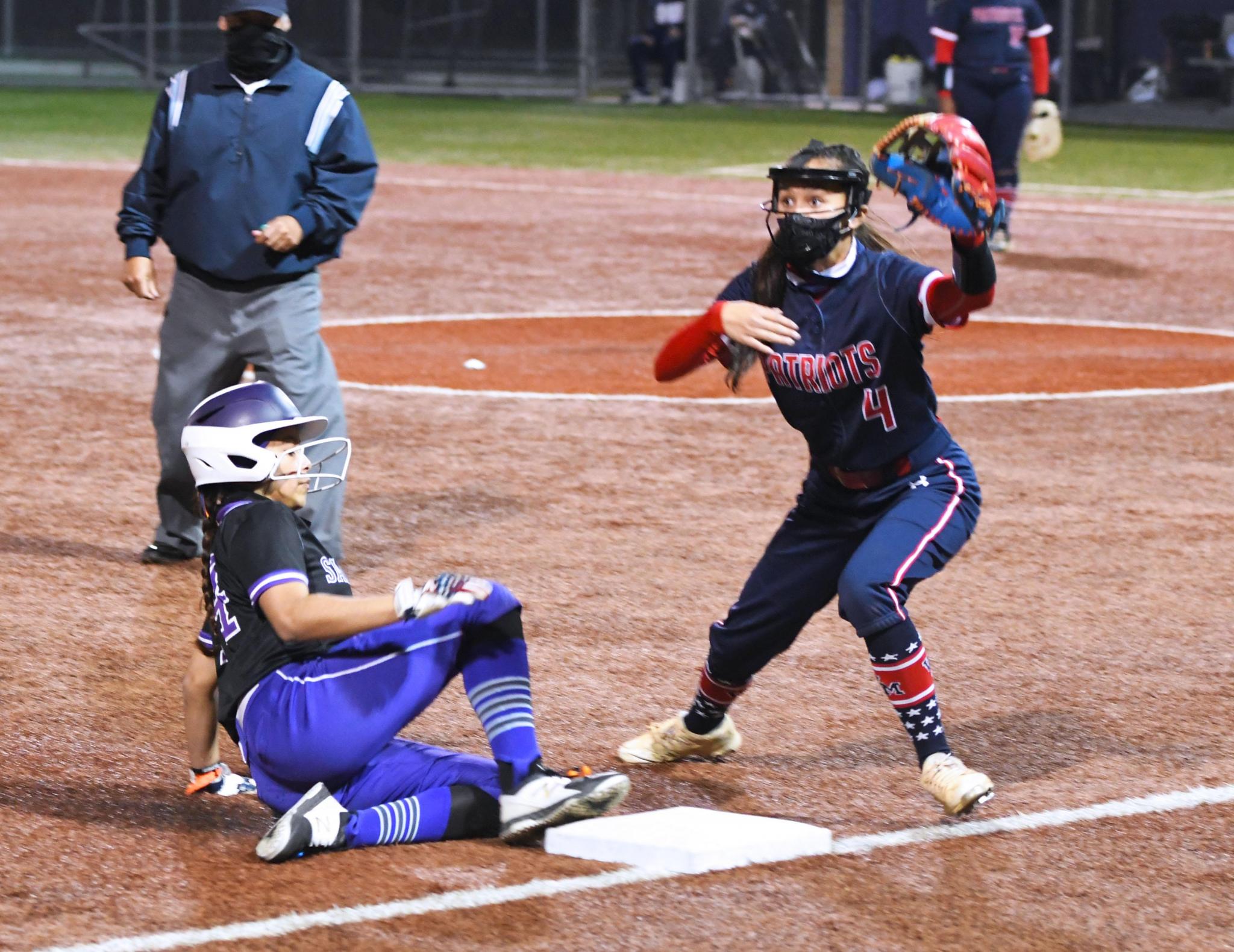 With the lingering pandemic going on, we tend to forget about the rest of the heartless diseases that affect the people around us.

Stitched onto the coaching staff's sleeves are orange and royal blue ribbons representing the battle against colon cancer and leukemia. Over the summer, former Lady Rattlers pitcher, Heavenny Garcia started a long battle against cancer which she decided to take it upon herself to fight, tweeting “I will not let cancer ruin my life.” It took some time but Garcia made her first public appearance since June at her former team's game and it happened to come in a dominant 12-1 victory over San Antonio Veterans Memorial (1-8, 0-3 district).

“It was a very emotional moment to see her back at the field. She has gone through so much, and her health has been so compromised,” head coach Cathy Stoughton said. “To see her sitting there next to the dugout was beyond words. She was smiling, and the girls had a little extra in the tank knowing she was there.”

Collecting the win in the circle was sophomore Kaylee Saenz, someone who related to Garcia’s recent hardships as her mother passed away from her battle with cancer this summer as well. With each performance Saenz pitches, it proves those ribbons aren't just for show. They make a statement that the yellow ball is just a game at the end of the day and the real battle starts outside of the circle.

“One of the things that I really like about this team is we have a lot of good chemistry, which is one of the most important foundational components you can have on the team,” Stoughton said. “These girls never have any quit, they never quit. We’ve played a couple of games where we've gotten down three or four runs, we come right back and score five or six.”

On the field, San Marcos (7-3, 0-1) has been taking care of business, winning seven of its last eight contests and it's started with the team’s dominance from behind the plate. The purple and white have already scored double-digit runs in five games this season, led by senior shortstop Kaylee Cavazos, who continued to make contact to the ball with ease Tuesday night. Between her and junior Annaleah Lombardo, the two combined for a 7-10 performance at the plate in addition to five RBIs.

“I try to stay ball-hungry, I guess. It’s kind of like I see it, I say ‘screw it’ and swing, even if it's a bad pitch,” Lombardo said. “Sometimes coaches will ask, ‘Well, why'd you swing?’ I'll just say I liked it, I have to swing at it. Sometimes it works in my favor, sometimes it doesn’t. If it's in there we’re gonna take it.”

The plate approach worked for Lombardo in the bottom of the sixth when she hit a single to short on the first pitch, allowing her teammate to pick up a run. Immediately after Cavazos hit a three-run RBI double to center, clearing the bases and ending the game by run rule. Stoughton talked about what’s made this team's offense work throughout the first stretch of games.

“They’ve been able to make adjustments at the plate with varying speeds, varying types of movement on the ball. We’ve seen all kinds of pitchers in the circle so far this year, and they tend to make adjustments very well even in the tournament. They could go from a slower pitcher to a faster pitcher with more movement, and it may take them an at-bat, but they adjust,” Stoughton said. “Sometimes hitters have a very difficult time adjusting to different types of pitchers, but we see the ball well. One of our strengths at the plate with all of these girls is that they're very polished and they're able to alter their mechanics, hands, stance, and location in the box. You try to coach those things but they've got all the intangibles, which is what makes them ballplayers.”

The battle on the field continues on Tuesday against Austin Westlake (3-1-3, 1-0) at Rattler softball field with first pitch set for 7 p.m.