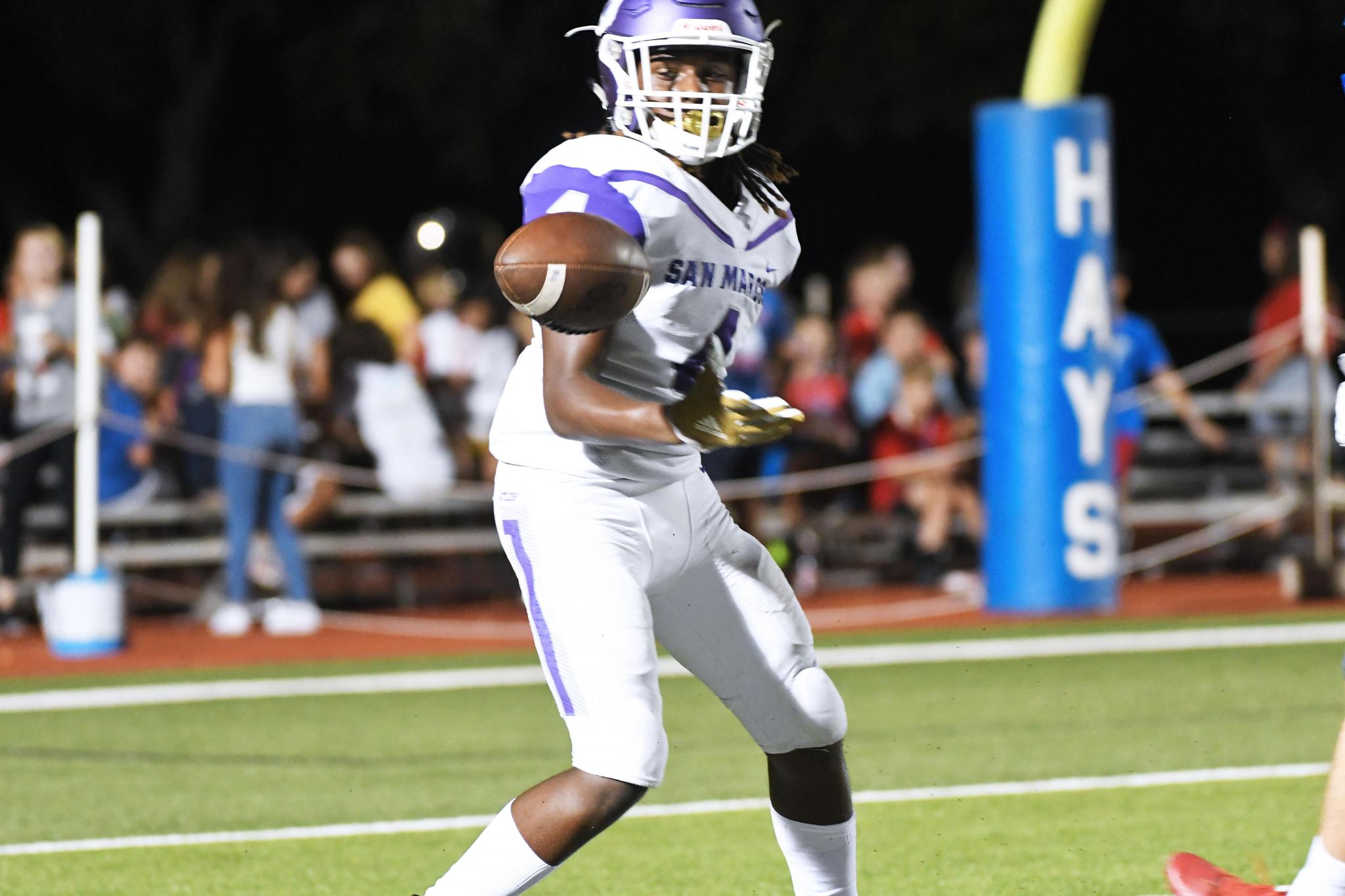 SAN ANTONIO—San Marcos (0-2) fought for as long as they could during Saturday night’s matchup against San Antonio Johnson (1-1).

But they ultimately came up short versus the Jaguars, resulting in a 49-14 loss at Jerry Comalander Stadium.

After drives that resulted in defensive stops for both teams, senior quarterback Alex Garcia found senior wide receiver Diego Cruz down the right sideline for a 55-yard touchdown that gave the Rattlers the first score of the night.

On the next drive, San Marcos responded with three consecutive stops forcing Johnson to go into punt formation. But the Jaguars tricked the Rattlers with a fake punt, resulting in a 60-yard touchdown, which evened the score at 7-7 with three minutes remaining in the first quarter.

After an interception by Johnson senior defensive back Garrett James, the home team responded on their next offensive drive with a passing touchdown on 2nd and 16 extending their lead, 14-7, to close out the first.

The visitors’ defense held strong for 10 minutes of the following quarter but senior quarterback Ty Reasoner lead a six-play, 89-yard drive ending in a Jaguar touchdown from the 16-yard line.

San Marcos came out of half time with some work to do. On the first play of the half, junior cornerback Alex Calderon sacked the quarterback putting the pressure on the offense to face another 2nd and 16. The defense got a key stop, which gave them a chance to cut the lead down early in the second half.

The offense rewarded their defense when sophomore running back Benito Canales finished off a three-play, 64-yard drive with a 5-yard touchdown run. The Rattlers cut the Jaguar lead down to 21-14 with 9:38 left in the third quarter.

The hosts didn’t let San Marcos’ quick start rattle them. They retaliated with 28 unanswered points, including another Reasoner rushing touchdown, his second of the night.

The Rattlers’ offense slowed down in the second half as the team took the 49-14 loss.

The effort was there all night for the Rattlers. Diego Cruz finished with seven receptions and a team-high 171 receiving yards. Canales controlled the ground game, carrying the ball 17 times for 55 yards and one touchdown. He also contributed 2 catches out of the backfield.

San Marcos will play their first home game at Rattler Stadium against Laredo United (1-1) in a rematch of their high-scoring affair from last season at 7:30 p.m. next Friday. Soto said he’s excited to see the fans.

“I’m just looking forward to playing in front of our home crowd,” Soto said. “And that student section is rocking, so we love playing at home.”