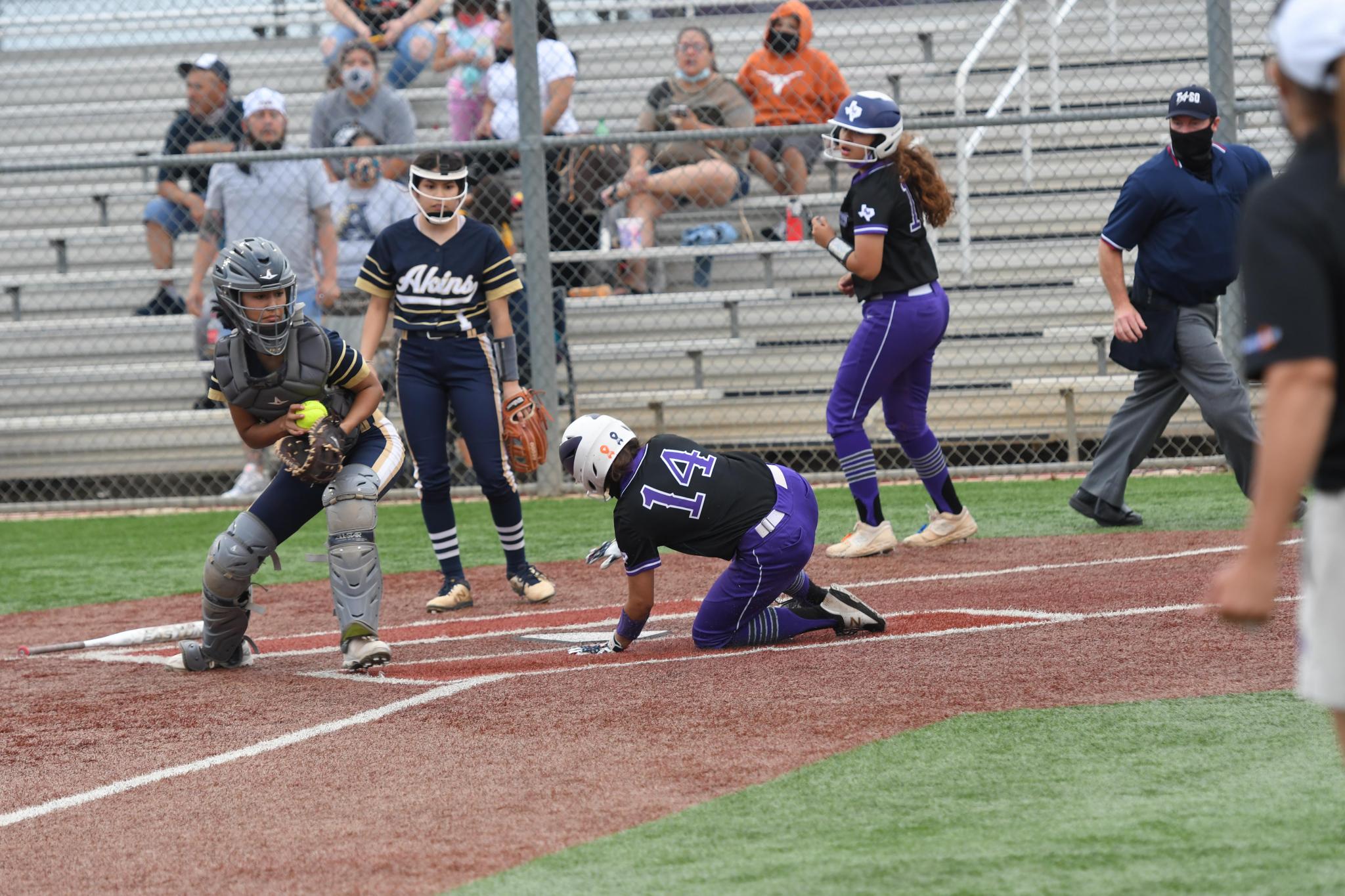 San Marcos gets back to fun, defeats Lake Travis, 9-3

After their final game of the 2009 season, head coach Cathy Stoughton came out to a pleasant surprise of sticky notes on her car. On April Fools’ Day of 2021, the holiday lived up to its name as her team took it a step further.

The girls come in every single day before games for batting practice. While both of their coaches were distracted with that, the Lady Rattlers took it upon themselves to saran wrap their coaches’ trucks in the parking lot. Stoughton was surprised and had one thing to say to her team.

“If we win, I’ll have no problem taking the wrap off of my truck,” she told them. It’s safe to say the coach had an interesting night unwrapping her truck like a Christmas present. San Marcos defeated the No. 1 team in the district, Lake Travis, 9-3.

This isn’t the first time this team has just focused on having fun while playing the sport they love. Earlier in the season, they were caught in a dance battle as they waited for umpires to arrive. They bring a piñata named “Jimmy” in the dugout for good luck — who oddly didn’t make an appearance in the win against Lake Travis — and they hosted a softball clinic for younger girls the day before the game to relieve some of that in-season pressure. They even went as far as telling their coach that senior UT Arlington commit Kaylee Cavazos forgot her jersey at home the day of the game.

“They’ve had so much frustration over being just so close all season,” Stoughton said. “I think last night, being out here with the little girls just watching them smile for two hours and be around softball and be relaxed and have a good time, it’s amazing to come out and do something like that and to be able to come out with confidence and just have fun playing softball.”

The first time the Lady Rattlers ran into Lake Travis (14-10-1, 6-2 district), Lady Cavaliers junior pitcher Paige Connors struck them out 12 times and only four players recorded a hit. This week during batting practice, Stoughton changed the routine in order to prepare for Connors this time around.

“The last couple of times what I'll do is, I'll actually throw the ball with backspin. So, even if the ball is not rising as much, because I'm a little older, if the balls aren’t rising as much in the cage, they have to actually put themselves at the perspective where they have to hit the ball higher and not hit the bottom of the ball, because with the backspin, they're going to pop it up. So I threw everything with backspin, so that they have to learn to stay on top of the ball and read it,” Stoughton said. “We also threw a lot of waste pitches that we swung at last time, so that they would watch the pitches out of the zone and would be more patient. We worked on the off-speed, we've been working on a lot of changeups, and we did a much better job of laying off the changeup tonight because the rise ball and the changeup killed us the first time.”

The pranks, plus a prepared team, loosened the Lady Rattlers up for the game and the batting practice showed up, especially for sophomore outfielder Eliza Lozano, who went 3-3 with four RBIs including one in three different innings. She credited her team's practice to her success at the plate today. The first four batters for San Marcos all rallied hits in the game. Maya Richards, the team's assigned bunter, knocked an inside-the-park home run off of Connors. That led to three-straight innings of runs for the purple and white, giving them a 9-0 lead heading into the top of the sixth.

“I think batting practice helped a lot of my teammates by staying off the high pitches and really focusing on getting it down, and hitting something that they can hit, and obviously worked in our favor,” Lozano said.

At this point, freshman pitcher Mercedes Layton had given up no runs in the game. She said she felt good throughout the duration of the game and with her defense behind her, the pitcher just had to force the Lady Cavaliers into groundouts — which they did all night, including a double play to end the game. Although Lake Travis scored in each of the final two innings, it wasn’t enough to tame the Lady Rattlers.