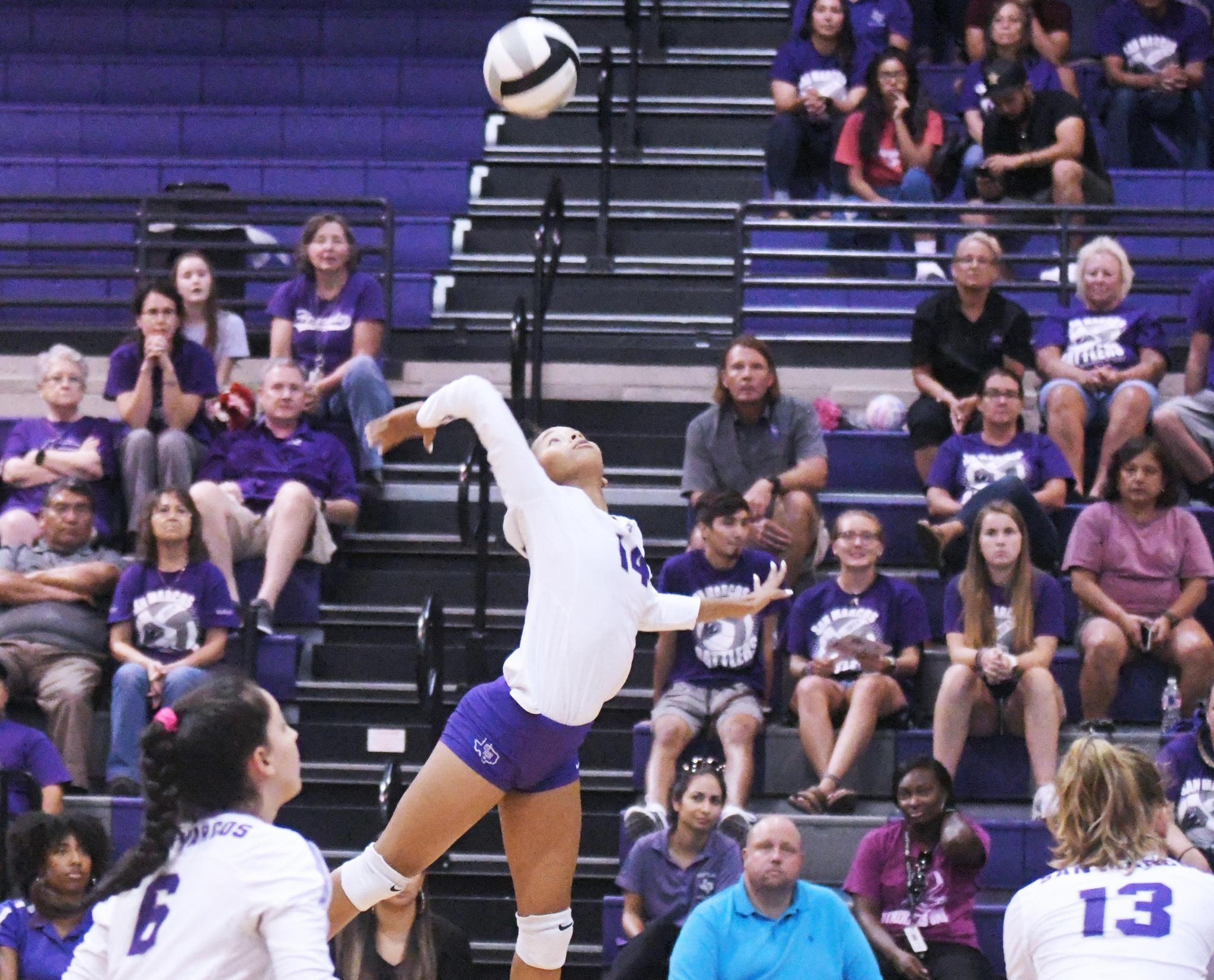 The blocking and power on the offensive side of the ball for the visitors was too much for the Lady Rattlers to contain. Steele opened up the set taking advantage of San Marcos’ mistakes on offense. Multiple errors by the visitors, including two net calls and a serving miscue, rejuvenated the home team's energy and gave them the lead, 5-3. The Lady Knights returned the favor offensively with a kill that tied the game up. The Lady Rattlers needed someone to break the cold spell on offense for them and senior right side hitter Jordan Helbig came up with timely plays, keeping her team within striking distance.

The senior placed the balled in the right corner for her first kill of the night, followed by another ball split right between the defense’s middle blocker and outside hitter. Her offensive play stood out early in the match. Both teams tried to get the advantage but neither would let it slip away.  San Marcos trailed 21-17, but found a way to cut the lead to one after Helbig recorded another kill, halting the score at 22-21 before Steele called timeout.

After the break, both sides hit the net on spike attempts. A costly serving error by the home team closed out the first set, 25-22.

“(Helbig has) been consistent, she’s a smart player and very coachable. So when we tell her what’s open, she sees it and puts it there,” head coach Michelle Moreno said. “She is a four-year starter, so that type of leadership we really do appreciate. One of the most consistent players throughout the season.”

The second set started with the Lady Rattlers recording two kills from their offense, but from then on they couldn't find a rhythm. Steele went on an 11-0 run that put the hosts at a deficit they couldn’t recover from. The visitors went on to close out the set, 25-11.

Set three started off similar to the first, with the road team clicking on offense early. Junior outside hitter Riley Dow stopped them from getting ahead by too much. After settling in, Steele managed to grab an 8-4 lead following a 4-0 run. Down but not out, the Lady Rattlers battled back to tie the game at 13-13, but another game-changing run swung the pendulum in the visitors’ favor. The Lady Knights went on to score eight unanswered points. San Marcos did their best holding Steele at set point for multiple possessions until a net-ball ended the game, 25-16, and the match, 3-0.

“We needed to get back to making those little adjustments,” Moreno said. “Our first line of defense has to make sure that were are contesting and our second line of defense has gotta read that. We’re gonna be coming up against some big hitters, size and power and we have to be able to defend that.”

Helbig led the team with a team-high eight kills on the night. Junior outside hitter Layla Diaz chipped in seven more, as senior defensive specialist Julia Guiterrez did the dirty work on defense, collecting 10 digs. Junior setter Julia Anuta dished out 12 assists, making it 412 on the season.

San Marcos will look to bounce back strong against Schertz Clemens (28-4, 3-0) on Tuesday at 7 p.m. inside the Snake Pit.