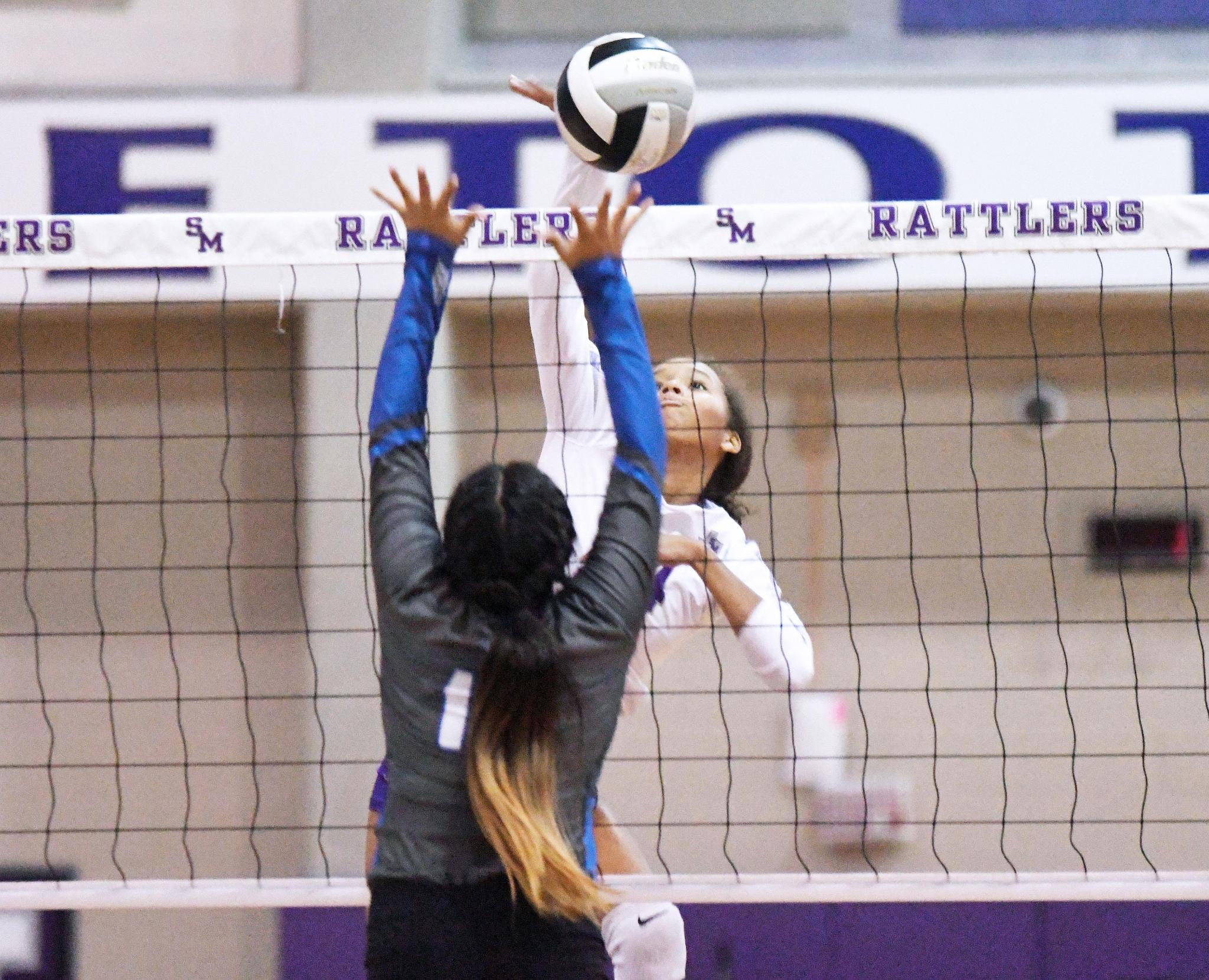 San Marcos brought out the brooms Tuesday night putting together a 3-0 sweep over the Kyle Lehman Lady Lobos.

The dominant serving from the hosts was the story of the game. Five players recorded a 100 serve percentage with perfect placement and trajectory on the ball. The string of exceptional serving led to a great performance from the Lady Rattlers.

“It feels really good to get the W and it feels really great when you get to do it at home,” head coach Michelle Moreno said. “The girls served great today, they were at 96 percent, we had a lot of aces. I thought Aubrey and Gabby did a good job serving with a low trajectory, so that's why they lead in aces.”

The first kill of the game set the tone for the rest of the night. Junior setter Julia Antu put the ball right in junior outside hitter Layla Diaz's sweet spot for a forceful spike that pounded in the left-hand corner of the court. Immediately after, freshman Liana Guerra mimicked her setter’s assist by passing it to Diaz again, giving San Marcos a 12-4 lead and forcing a timeout from the visitors. Out of the break senior setter, Jade Olivo, put together three assists and kill of her own, extending her team’s lead, 16-7.

The Lady Lobos wouldn't go down without a fight, though. They erased a 13-point deficit to eight within the blink of an eye. San Marcos quickly regained its poise, led by Antu who supplied three-straight assists, leading to a 25-12 set one victory.

Game two played out nearly identical to the first. Samantha Booth came out swinging for the hosts. The junior middle hitter took advantage of a nice pass that broke the ice on the scoreboard. She followed with a soft push on the ball that went right over the net, tricking the defense into diving at the air. With more consistent offense, the Lady Rattlers played themselves into a steady lead at 15-8. Olivo picked up where she left off, adding four more assists to her total of 13 on the night. San Marcos took the second frame, 25-15.

The final set gave the Lady Rattlers their toughest test of the night. The visitors came out scoring the first point and eventually took a 9-7 lead. Shortly after, the hosts went on a 13-0 run, giving San Marcos a commanding 20-9 lead. The streak started with an Olivo assist to senior outside hitter Jordan Helbig for a vicious kill over the middle, swinging the momentum back to her team. From there on, senior defensive specialist Aubrey Reina took the game over, piling on ace after ace at the Lady Lobo defense. Her serves put the team in position to close out the game on an 8-4 run, solidifying a win for the Rattlers in the set, 25-14, and the match, 3-0.

“Overall, I thought the girls did a good job staying in the lead, for the most part,” Moreno said. “We kind of lost that lead being down two in the third set, but we regrouped, gained momentum and finished, so I’m proud of them for that.”

Antu was happy to see her teammates thrive.

“I love it, it's so exciting and it builds energy for the team,” Antu said.

The win on Tuesday night brings the purple and white to a 12-15 record on the season. The next matchup will take place Friday at 6 p.m. against the McCallum Lady Knights inside the Snake Pit.