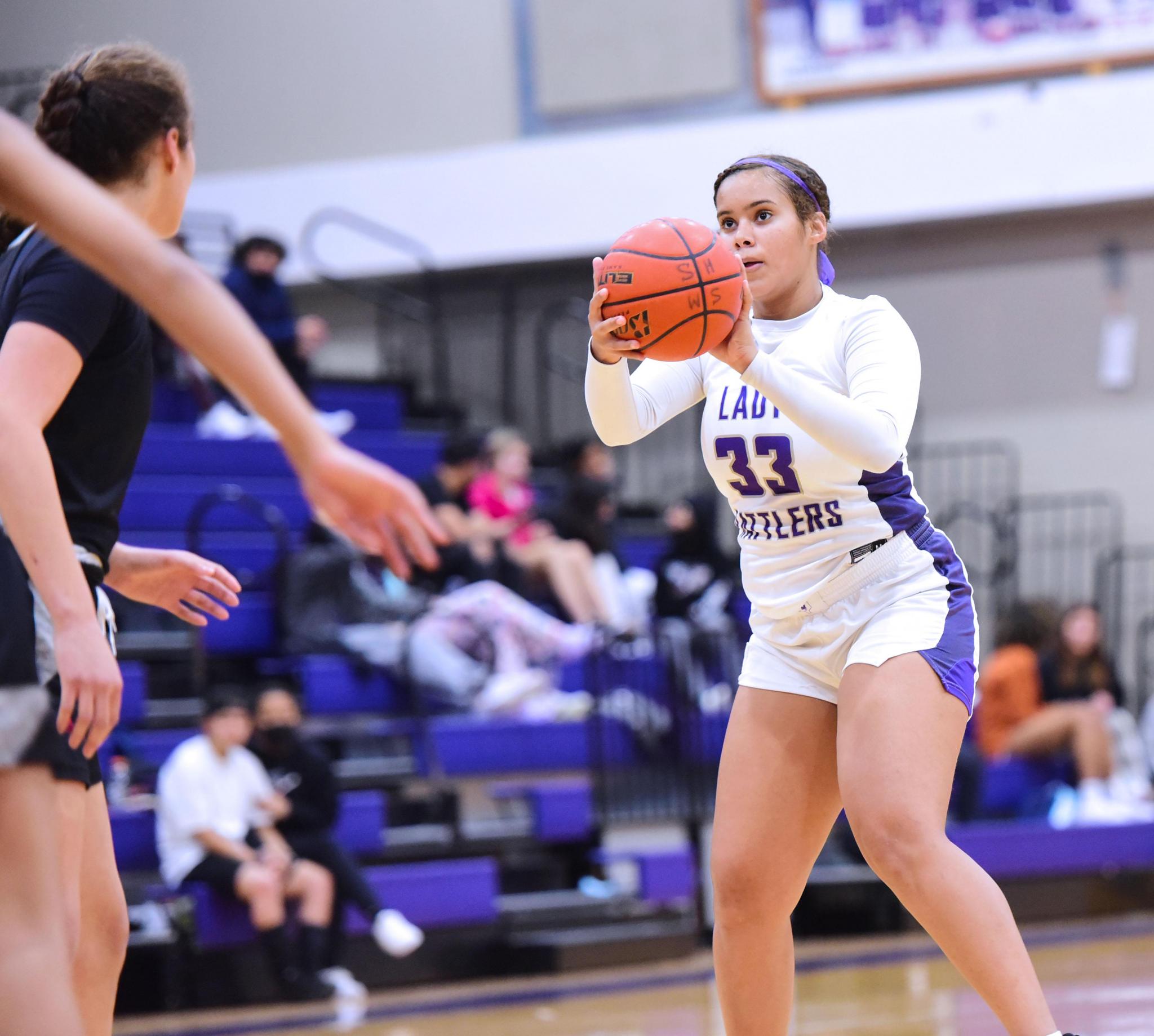 The first year coach is locked into battle every time San Marcos touches the floor. But in the second half of the Lady Rattlers’ 62-36 win over Austin Bowie (8-12, 2-3 District 26-6A) inside the Snake Pit, he got to sit back and watch his team flourish.

“I love it when I get to sit down. I love it. That’s why I'm sitting down now,” Ervin said.

He preaches being connected and his message was received. San Marcos (18-7, 3-2) scored 12 points in the first quarter — the same as its opponent — but the hosts did it by moving the ball seamlessly. Ten of the 12 points were assisted on, the other two coming from free throws.

Ervin, still standing, watched senior guard Angelina Sotelo keep the show going with back-to-back assists and a three to give the Lady Rattlers a 19-15 lead.

Bowie hung around in the first half by hitting four shots from beyond the arc. Three came from Anna Mccarthy, who started the game 3-3 from the perimeter, and another from Zeta Jenkins, who tallied eight points in the second quarter alone. Their play gave the Lady Bulldogs a 28-24 lead heading into the second half.

“We already had them on the scouting report,” Ervin said. “Then what we gotta do is cut down on the six turnovers that we had and play with confidence. When you're in a slugfest, you're gonna have to take some punches, too. We were able to take some punches. Now let's go ahead after halftime, and let's execute.”

With four teams tied with two losses on their district records heading into the night, the game had some sway in how the playoff seedings could shake out.

“It was very important, we talked about it all week,” junior center A’Miya Moore said. “We were ready for it.”

Moore proved it with her play. Senior wing Dede Pierson assisted the center in the midst of a 5-0 run to start the second half. Freshman guard Ezra Tobias spotted up from the right wing, hitting her first trey of the night and put San Marcos up 37-30 with 4:07 left in the quarter before Bowie called timeout. A couple of possessions later, Moore received another assist from Sotelo on a pick-and-pop that put the hosts up 10.

“Angelina talks to me a lot,” Moore said of the connection. “She tells me like where she sees me and I understand where she wants me to go.”

That boosted the energy for San Marcos, who went on to outscore Bowie 18-5 in the third quarter and all the momentum shifted for the Lady Rattlers.

Ervin could finally take a seat. A rarity, but one of his favorite things.

“Everybody was comfortable in their role,” Ervin said. “That’s what we've been really preaching because I told our best players, ‘We're not good unless you make everybody else better.’ And that's what we've been preaching. Be connected.”

Tobias and Pierson led the team with 13 points apiece. Sotelo finished with 11 points and four assists, while Moore contributed 10 points and six rebounds. Every starter had an assist in the win.

San Marcos travels to Austin Akins (1-10, 0-3)  on Jan. 14 at 7 p.m. for its first district road game since Dec. 10. Although it has been a while since the Lady Rattlers played outside of the Snake Pit, Ervin feels comfortable taking his team to Austin searching for their third win in a row.

“I like going on the road,” Ervin said. “You don't have all the distractions of being at home. At home you got family, you got friends, you got this person trying to tell you to come here. When we go on the road, we get our meals we get on that bus, we get zoned into the process, we watch film before we go. So we know what our goal is when we get on that bus and we focus on that goal. We get to that other gym and we got business to take care of. We got business and then we're going home.”