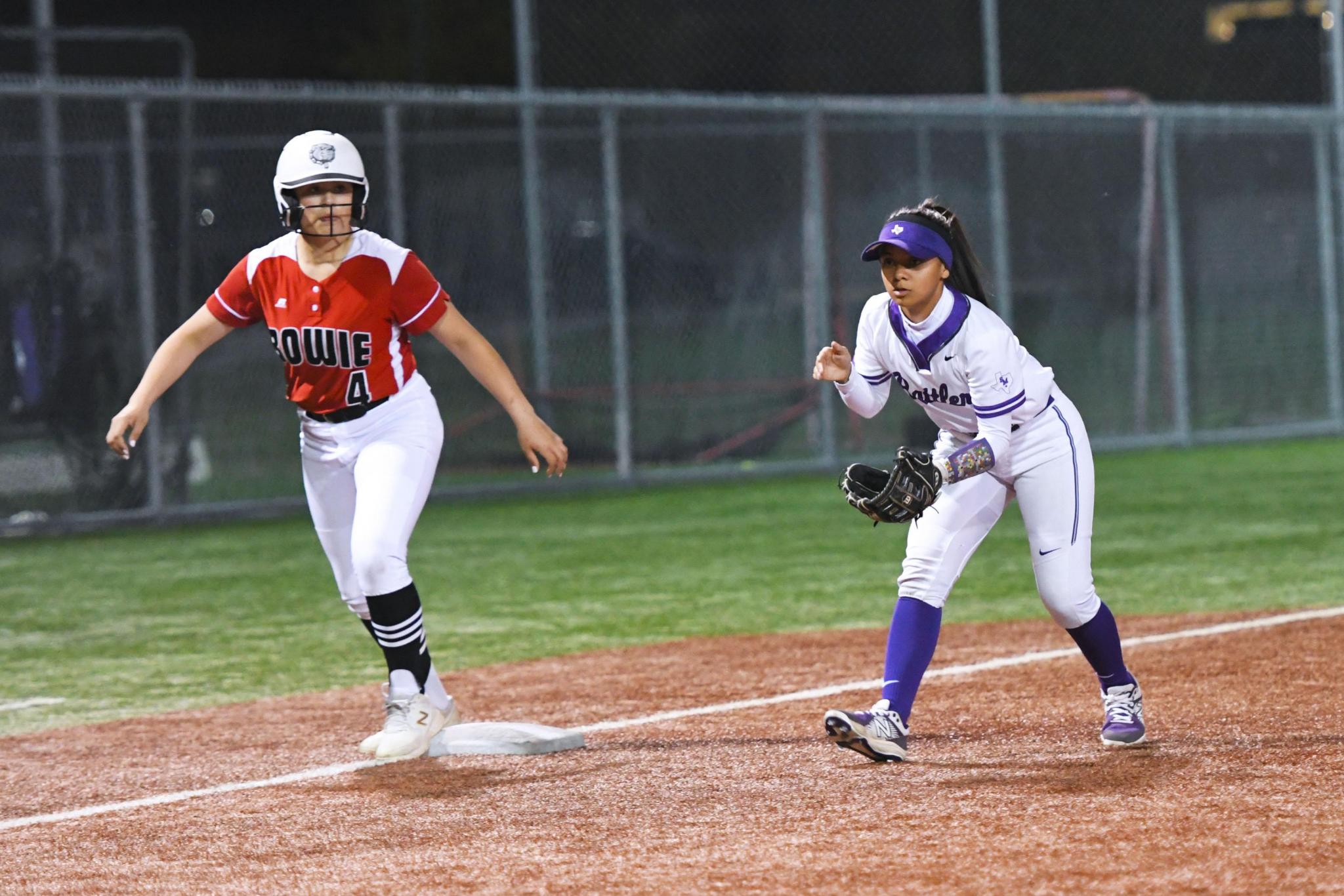 The Lady Rattlers couldn’t get going the way they wanted to Friday night.

Pitching difficulties combined with fielding errors in key moments caused the floodgates to open on San Marcos, ultimately leading to an 11-0 run-rule loss in five innings to district-leading Buda Hays  (15-5, 9-1 District 26-6A). The purple and white were able to put some runners in scoring position in their final two at-bats to try to extend the game but weren’t able to execute at the plate.

The Lady Hawks were able to get their offense in rhythm early, putting up nine runs in the first three innings. Buda Hays never looked back, continuing to extend its lead in the fourth inning before finally drawing a blank in the fifth while having shutout pitching.

“Hays is the district leader right now and that’s for good reason,” San Marcos head coach Cathy Stoughton said. “They’ve got a very potent offense. They’ve got a very tough pitcher. And when you get yourself in a hole in the first inning, a five-run hole, it’s pretty hard to dig out of that. They just flat hit the ball tonight. Their lineup is solid one through nine and they came out, they hit all of our mistakes and some of our good pitches. So their offense overpowered us tonight. That’s pretty much what happened.

“We talked to our pitchers about being sharper. We can’t afford to make mistakes. We have to be very precise when you play an offensive team that’s very strong, like Hays. We were missing over the plate too much. We were falling behind in the count. So we were having to come back closer, and then we had a couple of other times where we were actually ahead in the count 0-2, and we ended up either giving up a solid shot, giving up a hit on 0-2, or coming back and filling the count and then having to come towards the batter.

“So we could’ve done a better job in the circle tonight, but overall, we played pretty solid defensively. We made a couple of mistakes that opened the door for a couple of runs, but we made some good plays and we just didn’t have the timely hits. We had a couple of strikeouts looking, which is very uncharacteristic for us. So we talked about adjusting to the zone and if we aren’t sure and you’ve got two strikes, you’re going to have to swing the bat. So moving on, this loss in the whole scheme of things really doesn’t hurt us. You never want to lose a ball game, but when you’re playing the top team in the district, this is something that we can just learn from and move on.”

One of the positives that the Lady Rattlers could find against Buda Hays was senior pitcher Bianca Velasquez finding her way on the field. Velasquez has worked her way up to Varsity for three seasons, and came in the circle in relief of fellow senior Mercedes Layton to start the fifth inning.

Velasquez made the most of her opportunity, putting the Lady Hawks down in order and throwing the only shutout inning of the game for the Purple and White. Velasquez’s pitching was also crucial in keeping San Marcos within striking distance of extending the game, holding Hays’ lead at 11.

“To give Bianca an opportunity, that’s something that we’ve been wanting to do,” Stoughton said. “She’s a program kid, she’s a varsity swimmer, this is her first year in varsity softball and she doesn’t get in very much. So we felt like tonight would be a perfect opportunity. Not only because she works hard, but we also thought about the tempo of the pitching. They were timing Mercedes, they had timed Kayli and we knew Bianca threw a little bit slower and had a bit of drop on her ball. We thought maybe it might work some magic and she comes out and pitches.

“You could see, she was super intense. She’s always intense. She never gets rattled. She didn’t care who she was pitching to and she got three up, three down. So that was fun and the really neat thing about that was not only seeing the kids cheering for her, but seeing the fans getting into it, that’s a special moment. Those are things that are beyond Softball. So it was really cool to get to see her do that and to give her that opportunity.”

San Marcos (10-15, 4-6) will be back in action April 12 against Austin High, where the playoff race in District 26-6A will begin to come down to the wire. The Lady Rattlers currently hold the fifth seed in the district while the Lady Maroons hold the sixth, making the game a “playoff-eliminator,” of sorts. Stoughton’s main focuses moving into the “playoff push” include having the right approaches at the plate and getting back to basics with the pitching staff.

“So I think us coming back against Austin high and seeing a different type of pitcher (will help),” Stoughton said. “We’ve seen her before as well. We’ve seen they’ve got two. Our approach to the plate’s gotta be the same thing. If they’re around the plate, we’ve got to be aggressive and go after the ball. (We need to) kind of look at the control because some of the pitching has been inconsistent and just kind of see what we’ve got, but they need to adjust better. I think tonight they were more worried about some of the calls we did or didn’t get in the strike zone. We’ve got to realize, we have to adjust to whoever we have, whatever zone we have, whatever call we have, they can’t make that a variable.

“I think that got in our heads a little bit tonight as well, which costs us. But most of the time we’re pretty, we’re pretty sound offensively, and I think we’re going to have to hit the ball. I think Kayli just kind of had a little bit of a rough night. She was off. I think she had some other things on her mind with it being cancer night and Mercedes just a little bit too much around the place. So I think we’re good moving forward though, I think we’ll be good against Austin high, we’ll be sharp. We’re ready to go. I think tonight was just one of those uncharacteristic nights for us in the circle, and against a team like Hays, you don’t want to make those kinds of mistakes and be off.”