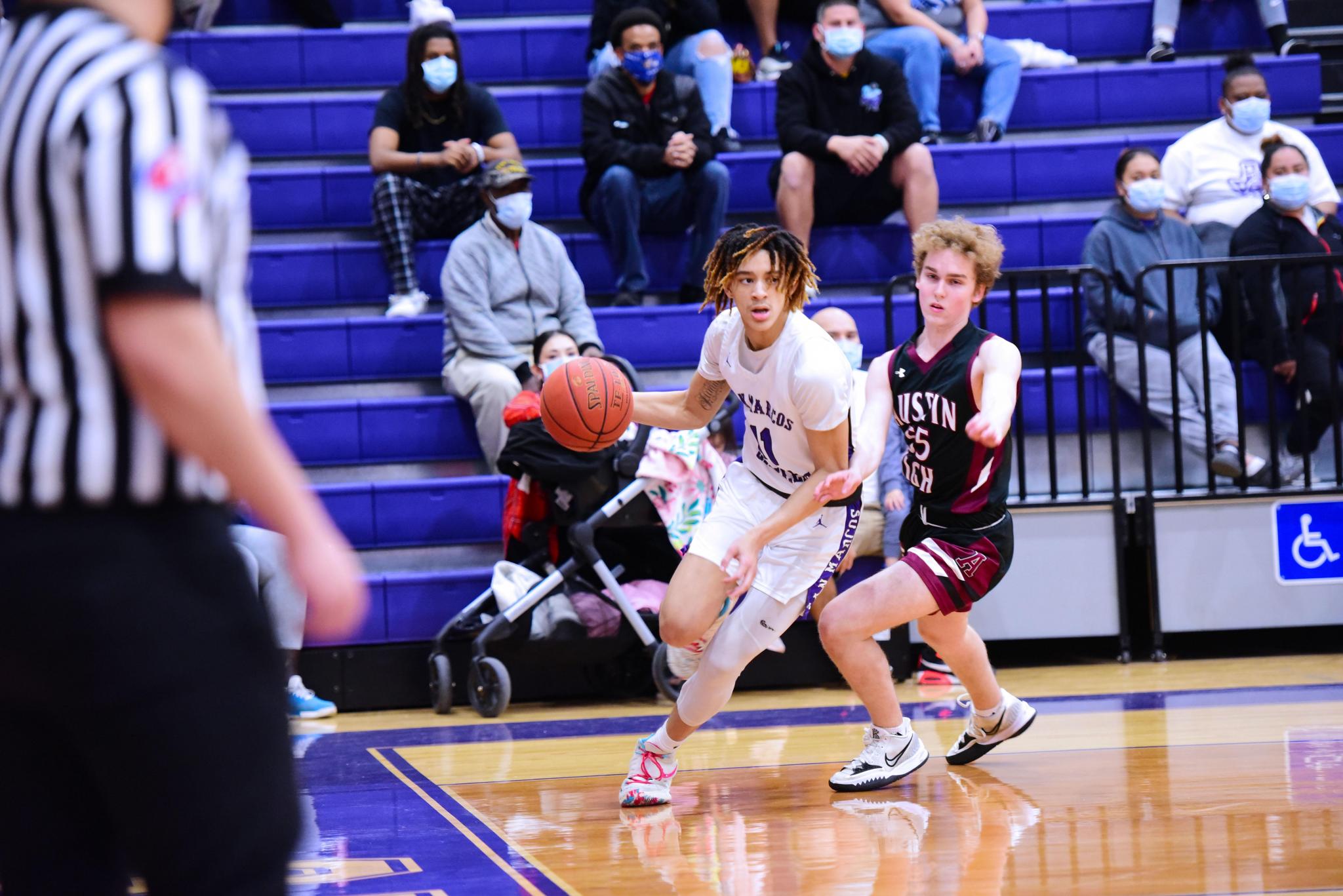 Following the team’s first two losses in District 26-6A, the Rattlers have bounced back with two blowout victories. The purple and white brought the intensity throughout their 76-34 rout over Austin High, starting off the game on a 19-0 run. San Marcos (24-7, 7-2 district) capitalized on their fast start and didn’t look back until the final buzzer.

“That's what pleased me the most, we didn't have (defensive intensity and communication) the other day (against Hays),” head coach Dan Miller said. “Today we did and we worked on it and we talked about it and they came out with the aggression and the talk — we call it ‘Baylor talk’ — on defense that we needed. It just set the tone for the whole game. I was really proud of the way they came out.”

The Rattlers’ communication and intensity was evident from the tip. On top of running efficient offense and knocking down shots, the purple and white called out rotations and where Austin High’s motion on offense was going throughout the night. They also played physical while not getting in foul trouble and created turnovers in the process.

Some of those steals led to fast break dunks and lobs, but the play of the night had to be four-star forward Malik Presley’s putback slam that made the Snake Pit erupt in elation.

“Nothing surprises me with Malik and Kaden, just to be honest, now that I've been around them a while,” Miller said. “They just make those kinds of plays sometimes in practice also, but it was a great effort and he just timed it great and he's very good at finishing and he did a great job.”

While Presley and three-star guard Kaden Gumbs are usually who’s under the spotlight before and after games, San Marcos has also been seeing positive strides in building their depth. Freshman guard Criston ‘Cash’ Good and sophomore guard Zyair Jolivette have been consistently improving and providing more shooting off the bench.

Senior guard Caleb Williams has been helping the two get comfortable in the role they’ll soon fill after his departure.

“I mean, it's kind of bittersweet for me. It's my senior season and it’s kinda like seeing a little version of me on the court,” Williams said. “So that's good. And yeah, we've took some time to develop with them, you know, (getting up at) 6:30 a.m. getting shots up, (we call it the) breakfast shooting club.”

While the year is on pace to be one of the most successful basketball seasons in recent San Marcos history, the purple and white know they aren’t perfect. They’re looking to continue to improve on defense, despite their stellar performance tonight.

“Communicating is the biggest part on defense, especially with Coach Miller,” junior guard Abel Trevino said. “He emphasizes that the most. If we want to have defensive stops we have to talk to each other, we have to trust each other, and just, you know, build as a team and I feel like we’re on track right now.”

Head coach Dan Miller will have his team focusing on countering zone defenses for both matchups next week. San Marcos will look to continue their momentum and capitalize on their gameplan when they return home against Del Valle on Feb. 1 at 8 p.m.

“We have Del Valle Tuesday and Bowie on Friday, (and) we're going to see zone, you know, I told the guys I'd be surprised if we get a possession of man next week,” Miller said. “So we're continuing to work on our zone offense. I thought we were pretty crisp today, especially the first half just moving it. We know teams sometimes are gonna zone us so I would say those are the big things.

“Both teams are solid, good teams, you know, and they're playing for something. Both of those teams are fighting maybe for that fourth and last playoff spot. So we just gotta keep working on ourselves. I always say that, it’s go 1-0 each day and we’ll be fine.”