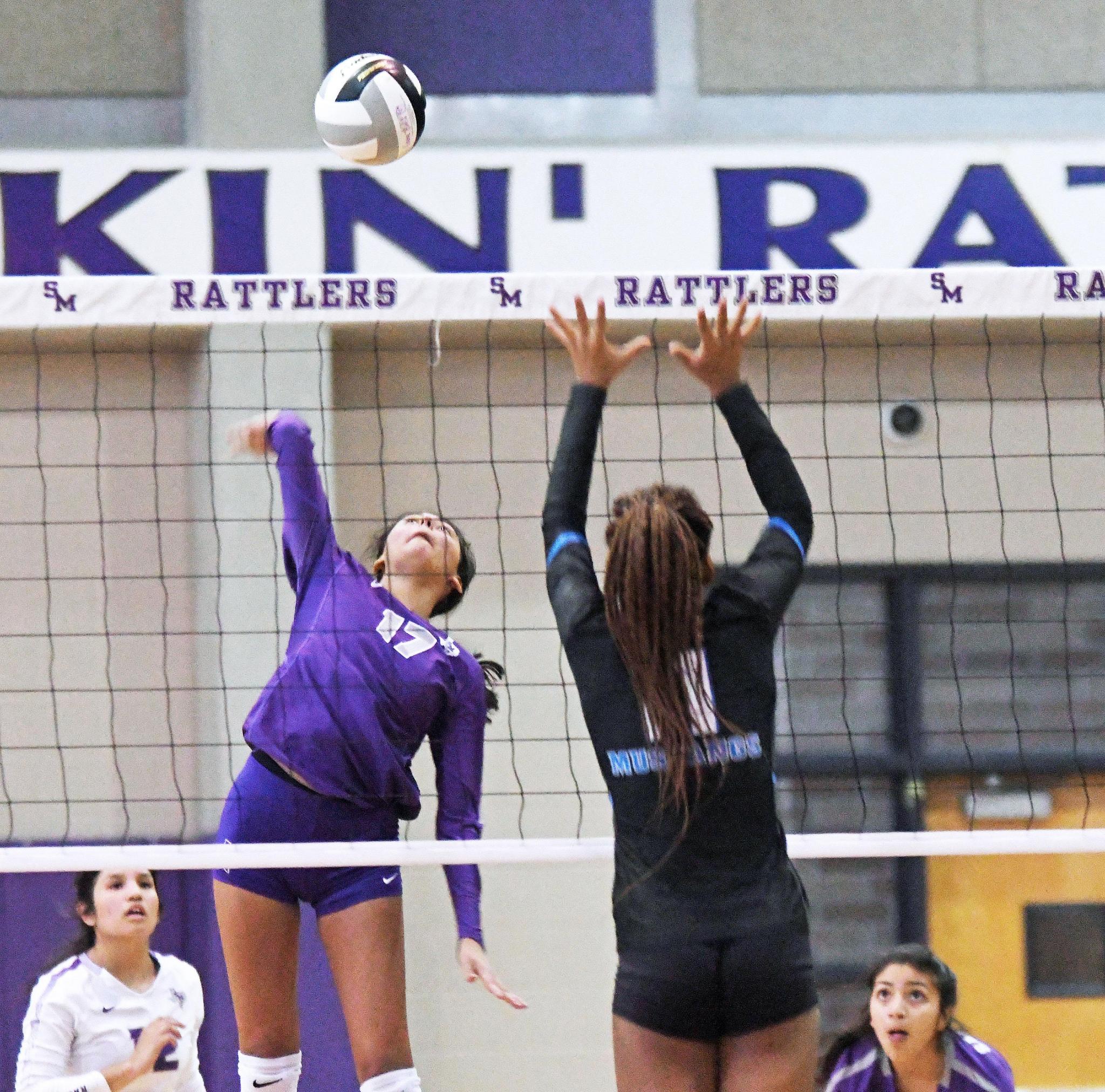 San Marcos picked up their 13th win on the season in sweeping fashion Tuesday night against Manor inside the Snake Pit.

“It feels great to win,” head coach Michelle Moreno said. “All three of our teams swept tonight, so it was a good night for all of our teams.”

Manor took no time letting the hosts know they came to play, grabbing hold of a 2-0 lead to start the first set. The Lady Rattlers took no time retaliating back with a 3-0 run of their own. Senior Jade Olivo put together a run of her own by chipping in three of her team-high four aces on the night. Olivo then continued her dominant play with a perfectly placed pass to junior outside hitter Riley Dow, whose kill established an 11-7 lead.

The Lady Mustangs tried to keep it close, but clutch serving by junior setter Julia Antu kept propelling the purple and white ahead of their competition. Antu’s presence was felt throughout the last half of the set, adding three more aces to her teams' totals on the night. Her serving stint closed out Manor, 25-10, in the first set.

The Lady Rattlers struck right back with a kill from junior middle hitter Samantha Booth’s keep the momentum in their favor. However, the team was plagued with three different defensive errors, putting them in a 5-1 hole that they had to climb out of. With athletic digs and superb serving, the host put themselves right back in position to take the lead once again, starting with forcing the visitors’ defense to mirror the Rattlers' mistakes. Manor’s three defensive errors and senior libero Julia Gutierrez’s aces put the hosts at a 17-9 advantage.

The visitors wouldn't go down without a fight as they cut the deficit down to seven before the home team could seal the deal with a smooth push pass over the net from Julia Antu. The final point was awarded and the Lady Rattlers would close out the set 25-15.

After a slow start in what would be the last set of the game, Moreno told her team “We’re flat, you all are flat, let's pick it up.

“So they started talking and picked up the energy … I felt like we could’ve had more energy with more intensity.”

The Lady Rattlers found themselves trailing by two early in the final set of the game, but with aspirations of closing the match out, the team quickly found its groove, building their lead to more than 12 during a stretch of consistent play from the purple and white. A 4-0 run started with Booth’s aces, who gave the defense a well-deserved rest by not allowing Manor to get a chance at returning the ball back to her team. Immediately after, the Lady Mustangs returned the ball, but freshman middle blocker Liana Guerra returned the favor as she executed what was the highlight kill of the game, giving her team an 8-5 lead and forcing a timeout from the visitors.

“From experience, I thought I took everything that I have learned into that one play,” Guerra said. “It just happened so quick, I knew it had happened in a split-second.”

From that moment on, it was advantage Rattlers.

Directly after the timeout, junior outside hitter Layla Diaz added more fuel to the fire with her fourth kill of her five on the night. The run couldn't be stopped by Manor as San Marcos pulled away to a 21-13 lead before ultimately ending the visiting teams' hopes in the final set, 25-14.

With the win on Tuesday night, San Marcos brings their record to 13-16 on the season. The Lady Rattlers will be back in action this Friday at 6 p.m. as they take on the Del Rio Lady Rams inside the Snake Pit.

Moreno knows what to expect against their opponent on Friday night.

“I know Del Rio is going to work hard, they get after it, they're a scrappy team who’s going to work hard,” Moreno said. “Our preparation begins (Wednesday) and that was something I told them on Monday starting out that the week that our two games will depend on our preparation so we need to have high-energy and hard-work in our practices so that we have a good outcome. We’re halfway there and tomorrow we're back at practice with that same plan to prepare and work hard so it happens in the game.”