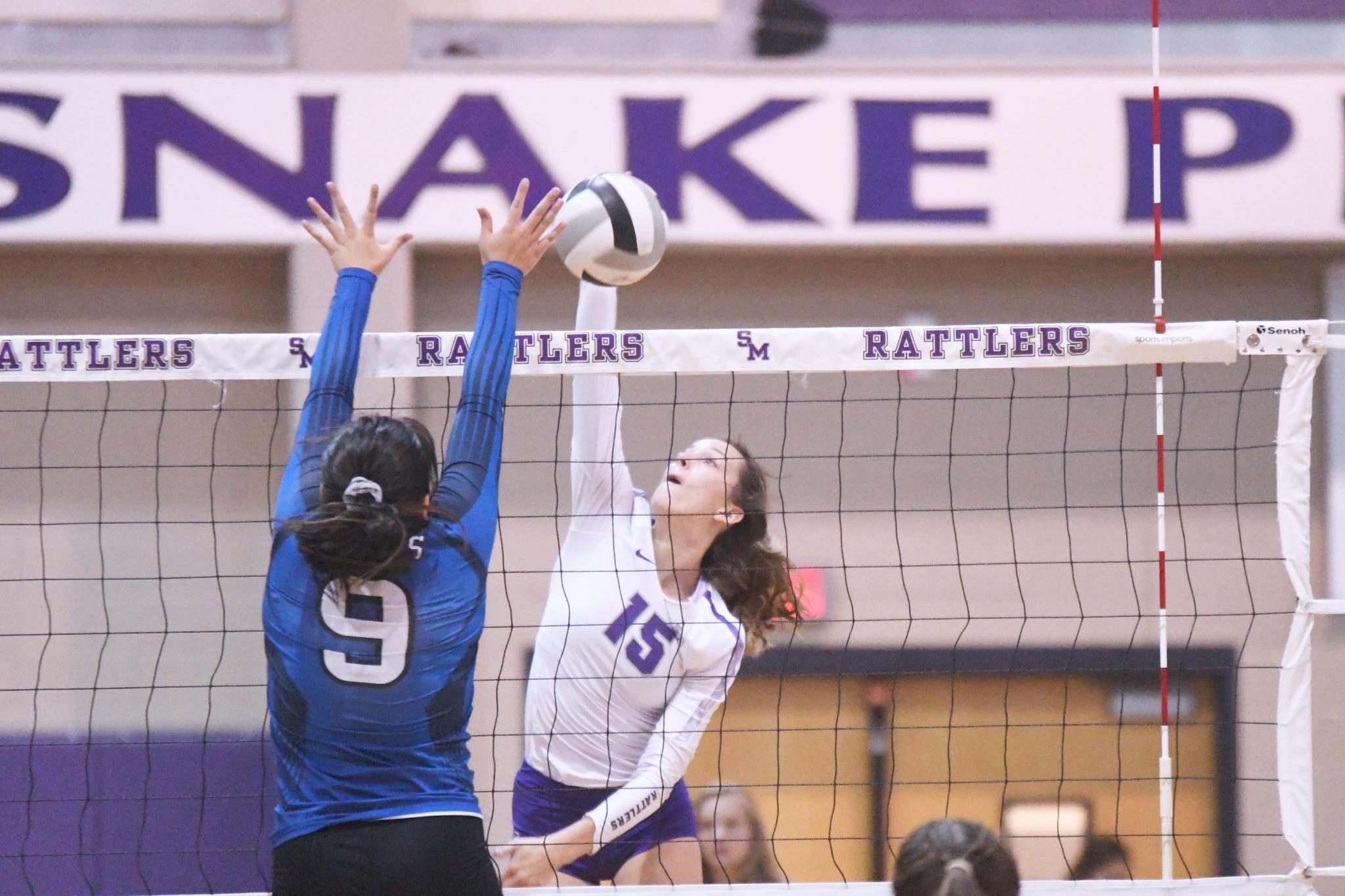 The Lady Rattlers displayed tremendous resiliency Friday night after trailing by three or more in each set. Every time the visitors got a comfortable lead, the hosts would make key plays in order to stay within striking distance. As momentum swung back and forth between the opponents, the home team was able to stay energized enough to steal the win.

“It was an awesome outcome, it was a fight,” head coach Michelle Moreno said. “Everybody was ready to go off the bench, producing on the court, it was obvious we were playing together, the passion, we were wanting it. I'm just so proud of all the girls for executing, sticking with the gameplan and starting off district strong.”

San Marcos got off to a slow start in set one, allowing East Central to jump out to an early 3-0 lead. With that, the home team went on the search for someone to make a play. Junior outside hitters Layla Diaz and Riley Dow came to the rescue. Both players recorded multiple kills to jump-start the offense and give the team its first lead of the night.

As the game went on, each team refused to let the other get too much of an advantage and the three lead changes between points 10 and 14 exemplified the fight from both sides. Three defensive errors allowed the hosts to capitalize on the Lady Hornets’ mistakes and go on a 4-0 run that resulted in San Marcos’ biggest lead of the set.

But it wasn’t over yet. Diaz’s two blocked kill attempts at the net gave the visitors some hope, as they went on to tie the set at 22 apiece. That was right before the senior captain and right side hitter Jordan Helbig came up big with a spike that went right through the gut of the defense. Two more faults by East Central gave the win to the hosts, 25-23

The Lady Rattlers found themselves in a similar position to start the second set. With the Lady Hornets out to another quick start, the home team knew it wasn’t going to be easy after stealing set one. Freshman middle blocker Liana Guerra’s kill, followed by junior middle hitter Samantha Booth turned things around.

With the 19-15 advantage swaying toward the Lady Rattlers, East Central turned to its junior middle-blocker for some clutch serving. The junior supplied back-to-back aces for her team which led to an important kill from freshman outside hitter Kylie Bennet that tied the score up at 19  before San Marcos called timeout.

The final set was the toughest for the Lady Rattlers as they didn't get the lead until halfway through the frame. The visitors held strong with their backs against the wall and established a 14-13 lead. A few plays later, senior libero Julia Gutierrez hit the ball over her head backward to Diaz for her final kill of the night, which established a 19-17 lead. East Central was plagued by serving errors that proved to be detrimental. The final play foreshadowed the stifling defense put on display by the Lady Rattlers. Booth and Helbig both jumped in the air and blocked the last kill of the night, ending the game and set, 25-21.

San Marcos won just district game in 2018. The team was happy to get its first of 2019 out of the way and hope it will set the tone for the rest of league play.

“It feels really good, it's definitely a confidence booster,” Helbig said. “Hopefully, we can play off of this for the rest of our games. So it's a good start for sure.”

San Marcos gets a couple days off before heading to Converse to take on the Judson Lady Rockets (5-24, 0-1) at 7 p.m. on Tuesday night.