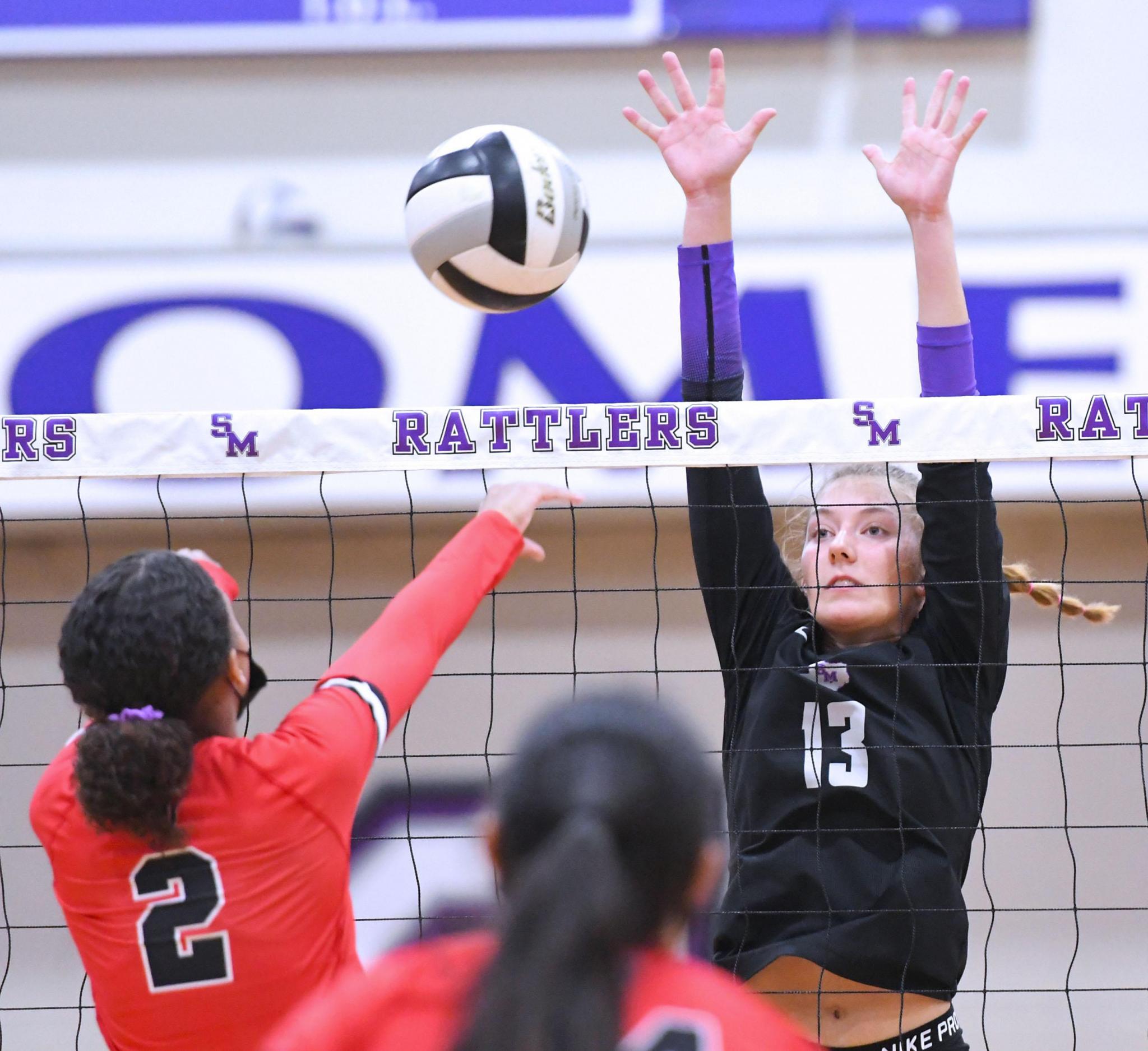 Austin High and Lake Travis sit dominantly at the top of District 26-6A, and Austin Westlake has a sufficient lead in the third spot. San Marcos, despite a substantially better overall record, is in a tight race with Buda Hays for the final playoff spot.

They began the game on a 6-0 run, and prompted a timeout from the Del Valle bench. Senior outside hitter Maggie Walsh led the hot start with a kill and block to begin the set. Walsh had the first two San Marcos points of all three sets and finished the game with 13 kills, 14 digs and two aces. Her vision of the court, and diverse repertoire of attacks, kept the Cardinals defense guessing. Even when the result was not a kill, Del Valle (7-23, 1-12 district) was off balance and out of system.

“Del Valle played scrappy tonight, but honestly we're getting ready to play Westlake, and if we have to play Hays again,” Walsh remarked. “Think(ing) ahead of what’s coming next, that’s one thing we have to do to get ready. We only have so many practices left until playoffs.”

After a Cardinal comeback, including three straight aces, the score was 12-10. For the rest of the set, the Lady Rattlers never allowed it to get closer than two. The set ended with two emphatic points from Senior Emery Jones, a big stuff block and a quick set kill, and in favor of the home team, 25-19. Jones called several audibles and chalked it up to, “awareness of where the rest of my hitters and blockers (are).”

Senior Joselyn Roberson played a solid all-around game and made effort plays to keep balls off the floor. Her highlight reel included a play in the second set where she hit the deck to scoop the ball off the floor, quickly regained her feet and put a ball down with authority. By the end of the evening, she tallied nine kills, 10 digs, and an ace. The offense as a whole gelled better in the second set for the Lady Rattlers. They battled to open up a seven-point gap, and finished on a 7-1 run to close out the set, 25-12.

The third set was tool time for San Marcos. Of their 10 kills in the set, four were tooled off of a Cardinal block. Five massive swings were on the floor before the block could be established, and junior setter Ruby Gordon registered a kill with a sneaky dump set. Gordon created opportunities to register kills, even when a pass was not perfect, and finished the night with 33 assists. The result was another tilted set, 25-13, in favor of the Lady Rattlers.

According to head coach Jared Te’o, the “true test” of the week was to, “talk about Westlake without talking about Westlake, and working on things we could work on. We went to a lineup we’d done at the beginning of the season, so we were a little nervous at the start. (Ultimately we) tried to stay focused, minimize errors, and stay aggressive. If we do that it will help us (against) Del Valle or Westlake.” There was also some experimentation to “look at different matchups” with “pin hitters who all can be interchangeable on the outside or the right side.”

Communication was on display for the Lady Rattlers. There were not any campfires with a ball hitting the floor and teammates looking at each other wondering who should have picked it up. They talked when hitting, too. Senior Sara Delgado commented, “(It helps) when a libero is talking to you from the back row, telling you where to hit, (and) where the (open) shots are.”

The crowd also poured on the cheers to honor the seniors.

“It’s a little sad. I grew up here. Having my family here was fun because I don’t get to see my aunt much, she works a lot, it brought my family together and they always support me,” Delgado said.

“I think it’s sentimental,” Jones added. “I’ve been (in San Marcos) since kindergarten, (and) I’ve played with Sara since tee ball, so it's really special to have senior night for people you played with your whole life.”