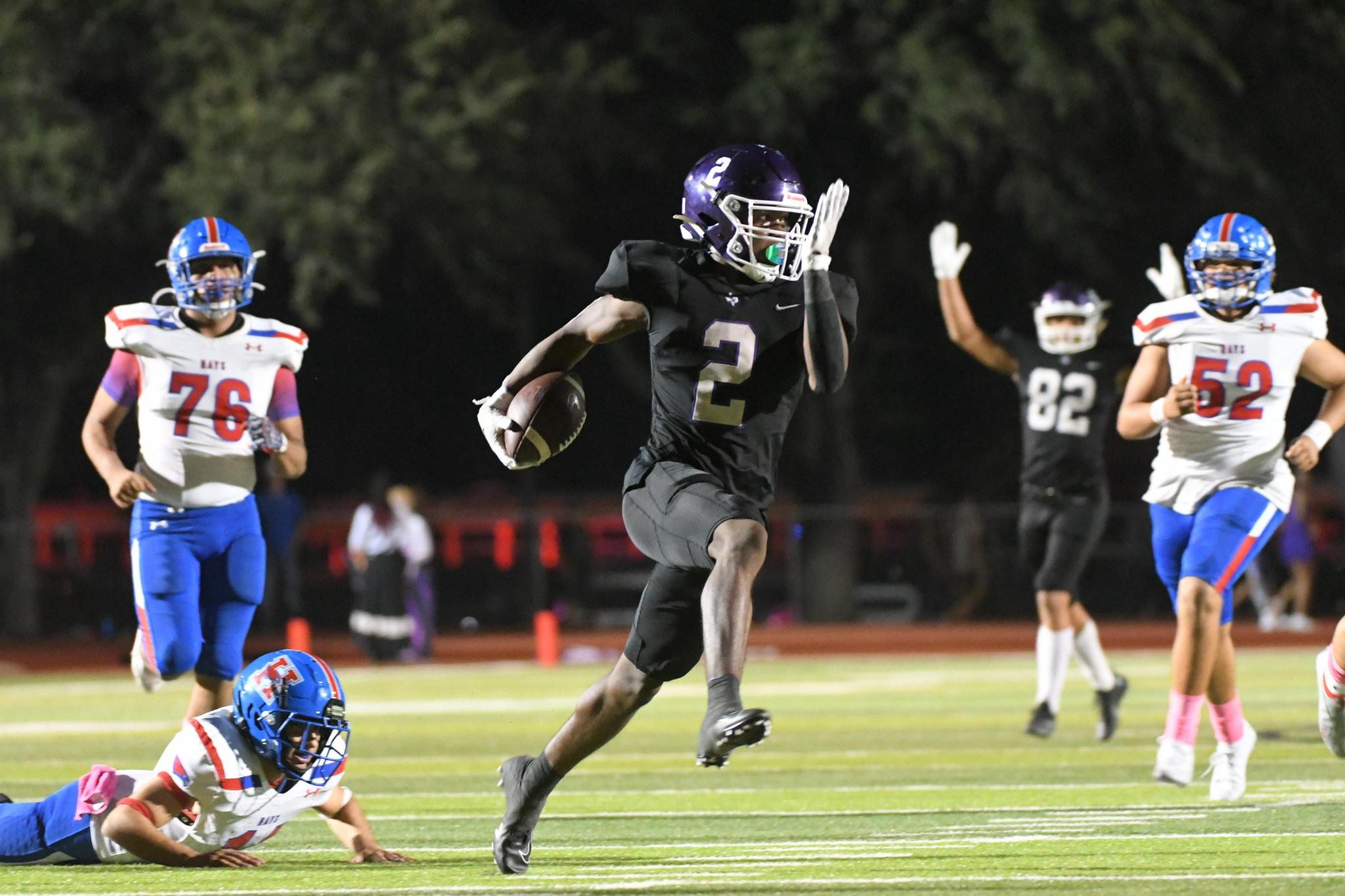 Brown meant it. The junior ran all over Buda Hays that night in San Marcos’ 62-49 win over the Hawks, rushing for an electric 444 yards and five touchdowns on 35 carries.

“You gotta give it to the O-line,” Brown said. “They were getting down, blocking, getting dirty. But we’ve just got to give it to them because we couldn’t have gotten the yards or the touchdowns without them.”

San Marcos (2-5, 1-2 district) had prepared for this five-game stretch since spring ball and the team knew Buda Hays (1-6,  0-3) would come out in their patented Slot-T offense. The Hawks knew that the Rattlers would be ready for it, too, and made adjustments. An abundance of looks including the Slot-T, spread formation and pistol got the Hawks' offense off to a quick start.

Coming into the night, San Marcos only averaged 17.6 points per game but blew that out of the water putting up 28 points in the first half with its exceptional ground game led by Brown. Although the Rattlers put up the most points they have in a half this season, Hays matched San Marcos’ 28 with a mixture of offensive schemes that affected the Rattlers’ personnel on defense.

“They came out with a different look, throwing the ball a little bit in the spread look, which kind of threw us off,” Walsh said. “We had guys in different positions to stop the Slot-T. Kudos to them for making it hard on us. But I just think perseverance is what got it done.”

The same ground success carried over into the second half for the visitors. Brown capped off a five-play drive with an 18-yard touchdown by juking his defender to the ground, giving San Marcos a 35-28 lead. The tug-of-war didn't end in the first half, though. Hays continued a little bit of air success with a post route over the defense's head, which resulted in a 38-yard touchdown and tied it 35-35 with 7:55 left in the third quarter. Brown once again silenced the home crowd by bursting through the Hawks’ defense and running 57 yards into the end zone.

The junior did have help on the ground from his starting quarterback, sophomore Isaiah DeLeon, who recorded 136 rushing yards and three touchdowns. Deleon scored his final TD of the night by bullying his way into the end zone to give his team a two-score lead.

The Rattlers came up with their third stop of the game, leading to another score that extended their lead to 20 — their largest of the season — with 28 seconds left in the third, 55-35.

Hays never quit. After a quick score, the Hawks forced San Marcos into two pass interference penalties, which allowed the Hawks' offense to score a one-yard touchdown and cut the Rattler lead to six. But with the ground game going San Marcos’ way, Hays couldn’t get the Rattler offense off of the field in enough time to try to finish the comeback.

Brown is confident his team has ignited a new start to the program following the win over Hays.

“I feel good. I can't even talk right now. It feels excellent coming out here to beat our rival school and everything,” Brown said. “We haven't done this in years, we haven't done it in a long time. It’s a new generation and we’re trying to start changing things around here.”

Earlier in the week, Walsh said it wouldn’t truly feel like a rivalry until he beat Hays. It’s safe to say he’s officially ingrained into it now.

“If there’s a rivalry, there's a lot of energy surrounding it, and there was definitely energy tonight,” Walsh said. “I tried to downplay it a little bit so we’d take care of business throughout the week, but there's definitely different energy. So when you're in the same county, you're supposed to be a rivalry, so I'm glad we got this one this year and to be on that side of the rivalry.”

San Marcos looks for its first winning streak of the season next week against Austin High in its return to Rattler Stadium for the first home game since Sept. 17. The Rattlers and the Maroons kickoff at 7:30 p.m. on Friday and Walsh and company have a chance to do something they haven't done since his arrival in San Marcos: win back-to-back weeks.