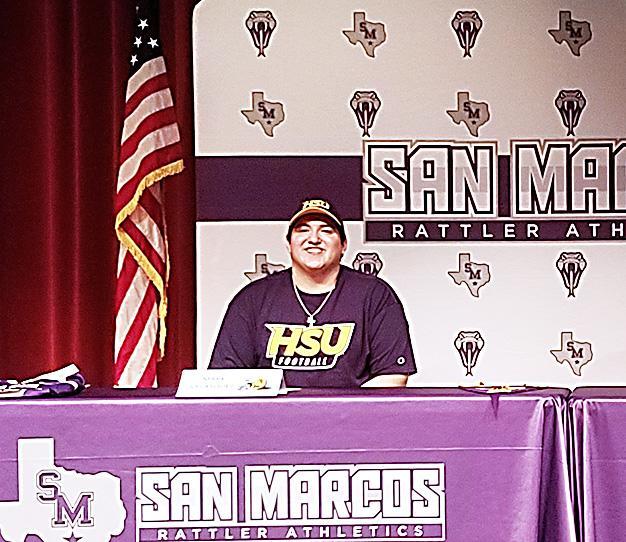 Velasquez was a grinder on the field. He was an anchor for San Marcos’ offensive line, helping the team win the district title his junior season and leading the unit as the starting center in his senior year. During the offseason, Velasquez and his family would travel to football camps across the country, improving his skills and exposing him to college coaches and scouts.

He was a grinder off the field, too. After practice, Mark would head to the Scholastic Aptitude Test prep center and would later keep studying at home, sometimes staying up late getting ready for the test. He took the SAT multiple times to make sure he was satisfied with his scores.

Though his high school career has ended, the senior still has more grinding to do. He signed with Hardin-Simmons University last Wednesday as a part of National Signing Day.

“It means a lot to me,” Velasquez said. "It means, finally, all the work I’ve done has paid off. But there’s still more to come.”

His coaches weren’t surprised by his determination.

“The word I would use to describe Mark is ‘vision,’” associate head coach Gerald Rodriguez Jr. said. “You can’t tell me he didn’t envision this when he was a little kid.”

“The thing about Mark is he had a dream and he had a goal,” head coach Mark Soto said. “And he let nothing stop him. He just continued to do what he needed to do to market himself and get exposure and get to the point that he could be able to sign a letter of intent today. That’s what was really neat about Mark, is he and his family did what they needed to do to get him into college.”

Velasquez said he enjoyed the environment at HSU and was confident in the academic assistance that the school provides. He’s excited to find his place on the Cowboys’ roster and reward those who have helped support him.

“I wanted to make sure my family didn’t have to work anymore,” Velasquez said. “I wanted to be able to provide for them for what they’ve done for me over the years.”