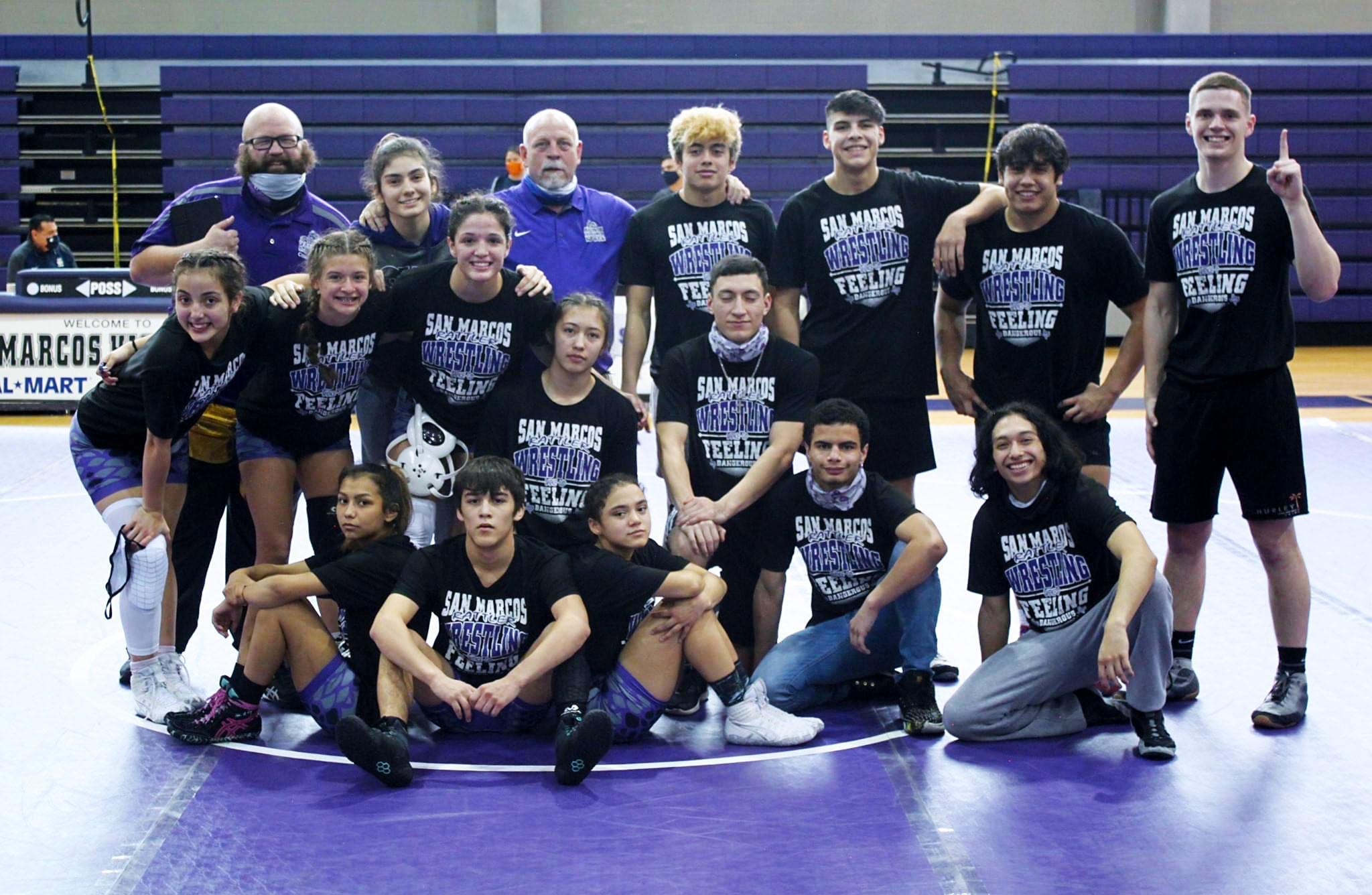 The San Marcos wrestling team heads to the District 26-6A meet on Friday, taking place at the Toney Burger Activity Center in Austin at 8 a.m.

At 120 pounds, senior and team captain David Banda will look to defend his district championship and undefeated record. He is looking to advance to the regional tournament for the fourth time. Banda looks to improve on his regional runner-up finish from last year after adding to his district title collection. He has his sights set on the state championship podium as well, but knows to take it one match at a time.

At 132 pounds, Charlie Vineyard is coming off an injury and is looking to make his mark as a first-year varsity starter. Vineyard recently had a big win against New Braunfels Canyon in the team’s last home dual. It was the most exciting match of the day.

At 145 pounds, Christan Garcia is looking to advance to the regional tourney for the first time.

Garcia has looked great at 145 pounds after starting the season a weight class higher. Garcia is a four-year letterman in the program and has grown leaps and bounds each season. He has developed into a great leader and will be joining the Navy after graduating.

At 152 pounds, Bruce Gallegos is a first-year wrestler and hopes to surprise some people at the district meet. Bruce decided to give this a shot and has wowed many of his teammates with his raw athleticism and tenacity.

At 170 pounds, Julian Moreno has his eyes set on a district championship and advancement to the regional tournament for the second time. He has reeled off 10-straight wins heading into the district meet. Julian is part of the Moreno family, which includes three San Marcos state placers, the record holders for overall wins (Mason Moreno) as well as girls’ career wins (Gianna Moreno). He looks forward to adding to his siblings’ accomplishments.

At 220 pounds, Randolph Calvino-Dane is a senior on a mission. He spent his time in the offseason working his way down from heavyweight to 220 pounds with a goal of making his mark in the history books at San Marcos. He had a very tough match early on against a highly-ranked opponent and showed he is ready to make an impact in his final season.

On the girls’ side, Jesyka Banda is an undefeated sophomore phenom at 95 pounds. Jesyka looks to follow in her older brothers’ footsteps and win a district title this season. All three of her older brothers were district champions. Banda has her sights set well beyond district but realizes it takes one week at a time to achieve her goals. She has several wins against the 102-pound competition, which should help her prepare for the 95lb district competition.

At 102 pounds, Kaylynn Martin is undefeated this season as a sophomore as well. Martin has amassed her wins against 110-pound competition due to not having someone in her weight class at most duals, giving up almost 10 pounds in most matches. Martin is one of the hardest workers in the room and is a fierce competitor.

At 119 pounds, freshman Malorey Torres is a two-sport athlete, and with the way the seasons lined up this year, she has flipped between track and wrestling on a daily basis. Malorey follows in the footsteps of her older sister, Marissa, a former team captain on the wrestling team. Malorey won the first match of her high school career by pin.

At 128 pounds, Katalina Postert has the talent to make some noise in the district tournament as a freshman. She brings a grappling background into her first season, learning wrestling on the fly with a very shortened season due to UIL restrictions on the wrestling schedules statewide. Postert has shown tremendous potential and even fought through a black eye and a bloody nose in two recent matches.

At 138 pounds, senior Gianna Moreno looks to make it four district titles in a row, with her eyes on the ultimate prize, a state title. Gianna is the defending district and Region IV champion, and is focused on a successful run to the State podium for the third time. Her approach is always that the next match matters most and that has served her well as the winningest female in San Marcos Wrestling history. She started out-chasing her older brother’s accomplishments, eventually surpassing them as she ends her career at San Marcos and moves on to compete at the collegiate level.

At 148 pounds, Anisa Moreno has some huge shoes to fill much like the younger Bandas, with siblings Jonathan and Gianna, as well as cousin Christopher Soliz being the only State Placers in school history. Her older brother, Mason, is also a state qualifier and district champion. The freshman’s second match this season was against a top-3 state-ranked opponent, so she has definitely faced a steep learning curve. The likely No. 2 seed for district, she welcomes the challenge to face her again, hopefully in the championship this week.

At 165 pounds, Alexa Hernandez followed her brother Sergio into the wrestling room and fell in love with the sport. The senior is a multiple-year letterman and one of the toughest kids on the team. She is also the second-tallest wrestler on the team. Alexa is hoping to extend her senior season beyond district with a solid showing.