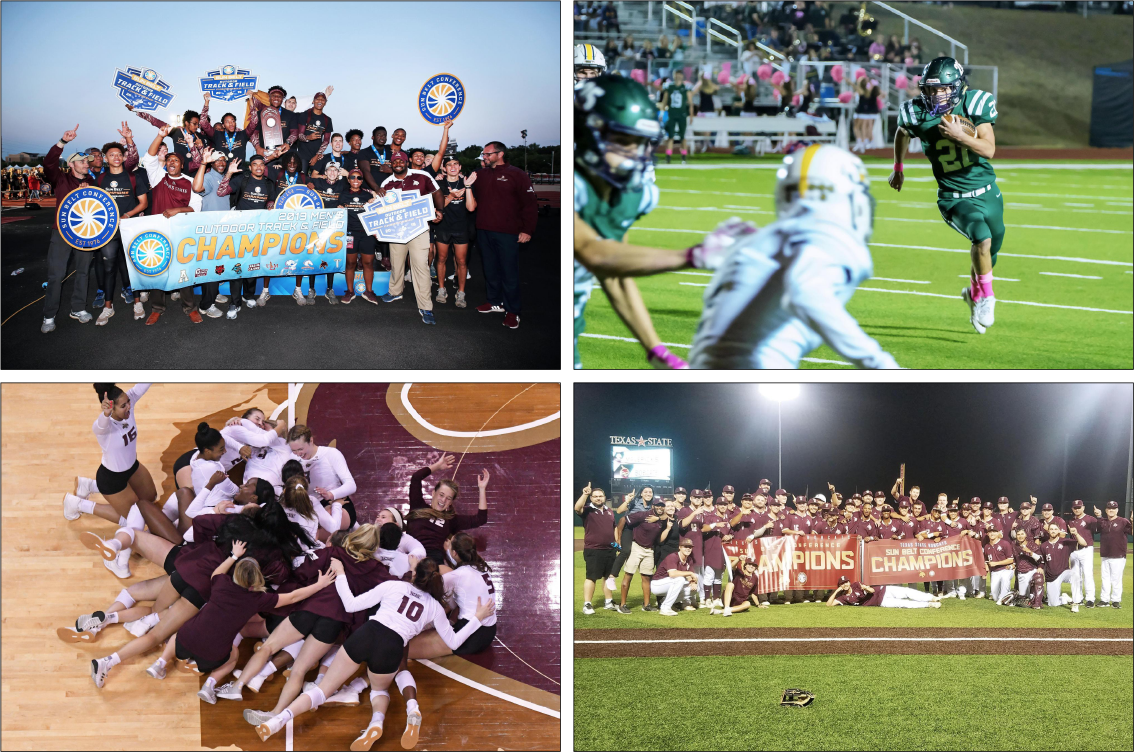 2019 was a big year for San Marcos sports. Here are the Daily Record’s top moments of the year:

The Bobcat women began 2019 with a strong start to the season, claiming the Sun Belt indoor crown for the third year in a row on Feb. 19 in Birmingham, Alabama.

The men’s team followed it up with an outdoor championship on May 12 in Jonesboro, Arkansas, with the women’s team placing second.

“My first championship was my first four months here, (at the 2016 men’s indoor conference meet),” head coach Jody Stewart said. “This is year four for my coaching staff. We’ve won eight championships. It’s been a good stint so far.”

Heading into the final day of the regular season, the maroon and gold needed one win to earn a share of the Sun Belt title for the first time in program history and two wins to become the outright champs.

Texas and UT Arlington combined for 43 runs through both games inside Bobcat Ballpark, resulting in 10-9 and 13-11 victories for the hosts.

“I thought we showed some toughness sticking in there today,” former head coach Ty Harrington said. “We could have been satisfied with winning and sharing the championship. But these guys didn’t do that.”

“I am incredibly honored to be able to wear red, white and blue again,” Osterman said. “To be part of the 18 that get to take the field this summer is an extreme blessing. I am so excited to join the other 17 athletes and compete together to keep the tradition of USA Softball going.”

San Marcos Academy improved from a 1-8 season in 2018 to a 6-4 season in 2019, grabbing fourth place in TAPPS Division III District 3 and securing a spot in the postseason.

It was the first time the Bears went to the playoffs since 2015. The team fell to The Woodlands Christian Academy in the opening round in Austin on Nov. 15, 48-7.

“What I really like about this group is that we’ve had a good mix of some kids that have been here for a while and some kids that came in and they blended together so well and have become a team and bought in to the work ethic area,” head coach Les Davis said. “And so we’ve played well.”

The Bobcats looked to repeat 2018’s success by winning both the conference regular season and tournament championships again this season.

Texas State accomplished its mission and did it on its home floor, beating Coastal Carolina, 3-1, in the Sun Belt final inside Strahan Arena and earning an automatic berth to the NCAA tournament for the second year in a row.

“You've got to have the dreams, you gotta have the goals,” former head coach Karen Chisum said. “In fact, I know it was after the third set, we moved to that other side and I looked at them and said, 'You guys, we talked about dreams. You're 25 points away from one of your dreams. Keep believing that.' And fortunately, we were able to do that."

London shattered the mark with 118 stops this year, earning the tackling crown at Coastal Carolina on Nov. 30 in the final game of the season.

“Whatever it’s at is going to be very hard to catch up to,” head coach Jake Spavital said. “It’s just, you gotta play four years of solid football. I think if he finishes at 450 career tackles, I don’t know how many people have done that in the country or at a certain school. So his impact’s going to be lasting here for a long time because I don’t know if anybody’s gonna ever break that record.”