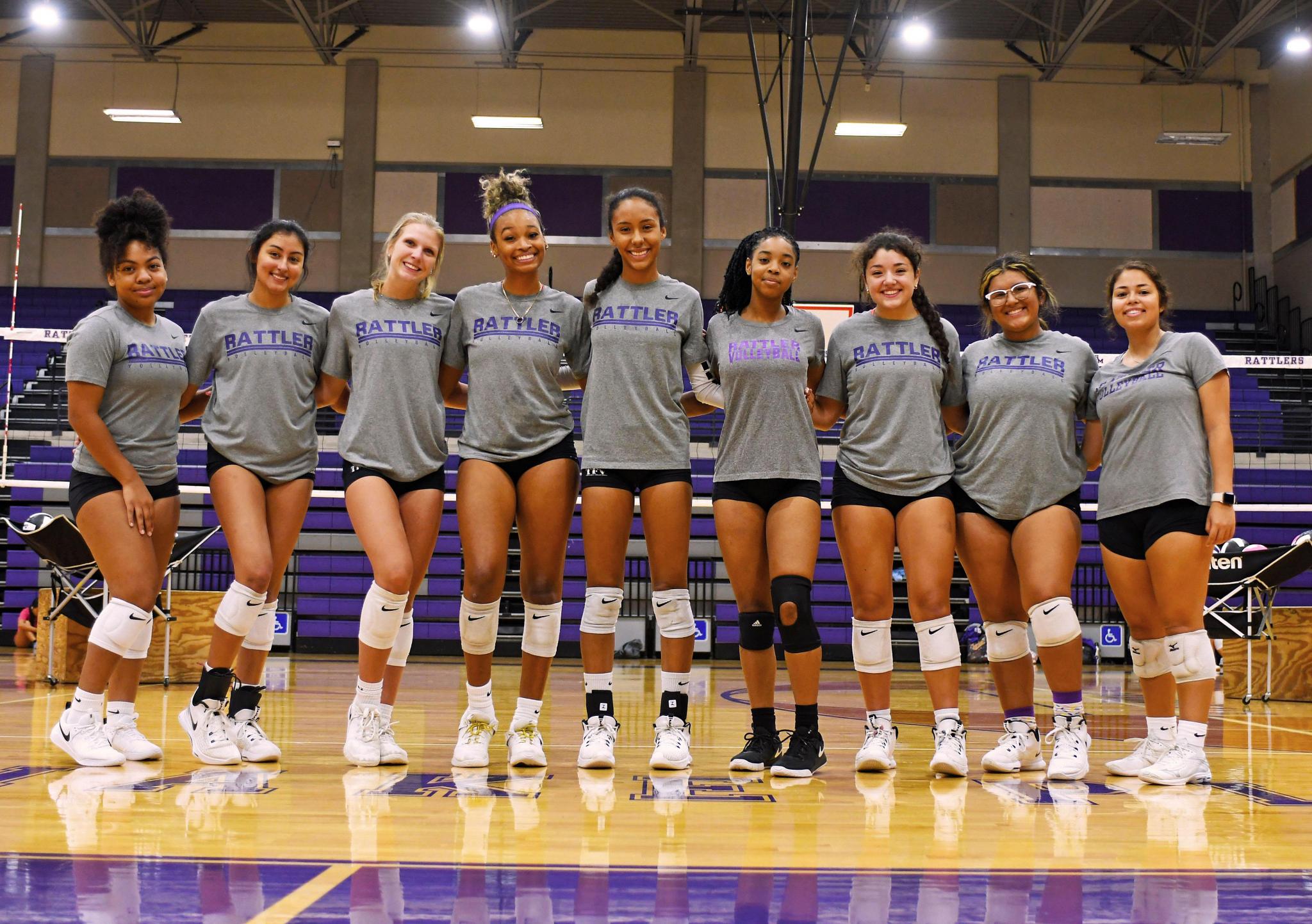 Something to Prove: Lady Rattlers begin new era under Ollett

The Lady Rattlers had to hit reset twice in 2022.

After former head coach Jared Te’o, now an assistant at St. Edward’s University, announced his departure from San Marcos on Dec. 7 of last year, it only took the purple and white a little over a month to name a new head coach. San Marcos CISD announced on Jan. 13 that former assistant coach Glenn Kennedy would take the reins of the program — but then Kennedy got an offer in May to be the head coach at his alma mater, Cleveland Tarkington, that he couldn’t refuse.

This left the Lady Rattlers with a void heading into the summer, but luckily for San Marcos, head boys’ basketball coach Dan Miller found a connection while in Houston coaching a basketball camp.

“Coming here, I was excited to be able to grow a program in a community that supports it, as opposed to being (in) a multifaceted high school district,” Ollet said. “I’m very excited that there is one feeder into all of this and to cultivate and get those kids excited to be a San Marcos Rattler from a very young age. I think it’s just different. It creates its own alignment when it’s multi-grouped, but I grew up in a community like this and you just get (more) excited.

“(And with) the kids I think there’s much more school spirit built-in as opposed to where you fall among your peers that are neighboring around, where here everyone’s going to the same place. So everyone’s working towards the same thing. So it’s faster for everyone to get on the same page, as opposed to comparing yourself to where your friends are going and (what they are) doing.”

While the purple and white may have a fast track to getting the team on the same page because of the district’s unique build, Ollett and the Lady Rattlers agree there’s still a lot of work to be done. Not only has San Marcos had to go through two different coaching changes in one calendar year, but they also have to replace two NCAA Division I outside hitters in Maggie Walsh, heading to Texas State, and Joselyn Roberson, playing for Tarleton State.

It’s a near-clean slate for the purple and white, but that’s something that’s appealing to the players on the team.

“(Coach Ollett) pushes us a lot. For a while, we haven’t had a really strict, organized, hard volleyball program, so I think it’s good because we need to build up our program (and pushing us is really important to doing so),” sophomore outside hitter Brinkley Reeves added. “It’s good for a fresh start, we have a new coach (and a) new district. It’s just a good clean slate for everybody.”

While San Marcos did lose seven seniors, the Lady Rattlers have seen new faces step up to compete for the gaps in the lineup left by the departures from the program. The purple and white are also trying to build new leaders on the team who can help mentor the young roster.

“I think (for us it’s getting) the underclassman to be able to trust us,” Gordon said. “(We’re trying to get them to) see us as friends instead of people they need to be afraid of. (We don’t want them to be) like ‘Oh we don’t want to mess up because the seniors (are watching),’ (we want the underclassman feeling) more of like we’re all a family, we all love each other and these are my best friends —”

“We don’t have two D1 commits on our pins (anymore),” Reeves added. “It takes a lot to replace that. There’s really no set positions right now, especially in the front row. Everybody’s playing and hitting in every spot and it’s just gonna take a lot of effort from everybody to step up and fill that spot.”

The Lady Rattlers will also be playing in San Marcos’ new district this year, District 27-6A which moves the purple and white to the southern I-35 corridor heading towards San Antonio. It renews San Marcos’ district rivalry with New Braunfels, and also renews matchups against Converse Judson, Cibolo Steele, Schertz Clemens and San Antonio East Central from the Lady Rattlers’ previous alignment from 2018-20.

“We played with this district our freshman year,” senior libero Callissa Castro said. “It’s a very small district, there’s six teams including us (so that makes each game more important) —”

The purple and white have a lot to replace, but there’s one key factor they bring back with their returners — playoff experience. It’s something the team wants to get back to again to right the wrongs of losing in the first round, but it’s also about proving something to themselves and their doubters.

They want to prove they can win as a team, even without the stars that graduated.

“I also think that (getting back to playoffs) is about proving something to people,” Gordon said. “Because we did have two D1 athletes who left, and now (people) are like ‘oh there’s no Maggie, no (Joselyn), like y’all are (over), Volleyball program’s over,’ but I think to us it’s like we’re more than just two players.”

Head coach Megan Ollett has only been with her team for the past few weeks, but the Lady Rattlers had their first scrimmage at Cedar Ridge on Aug. 5, and will open their season at home against Lockhart on Aug. 8 at 12:30 p.m. The purple and white had many twists and turns throughout their offseason, but are finally able to start writing the next chapter of San Marcos Volleyball.

The first step in that process? Building a culture the program can be founded on.

“(The culture) is still a work in progress and in my opinion I think it’s always a work in progress, because it’s what comes in the gym,” Ollett said. “But my goal is to build (a culture of) wanting them to be resilient, work hard (and) have fun. Just (to) be known as a team that’s always something to reckon with, (and that) they just have good character and they’re going to do it the best way that they know how and do it the right way.