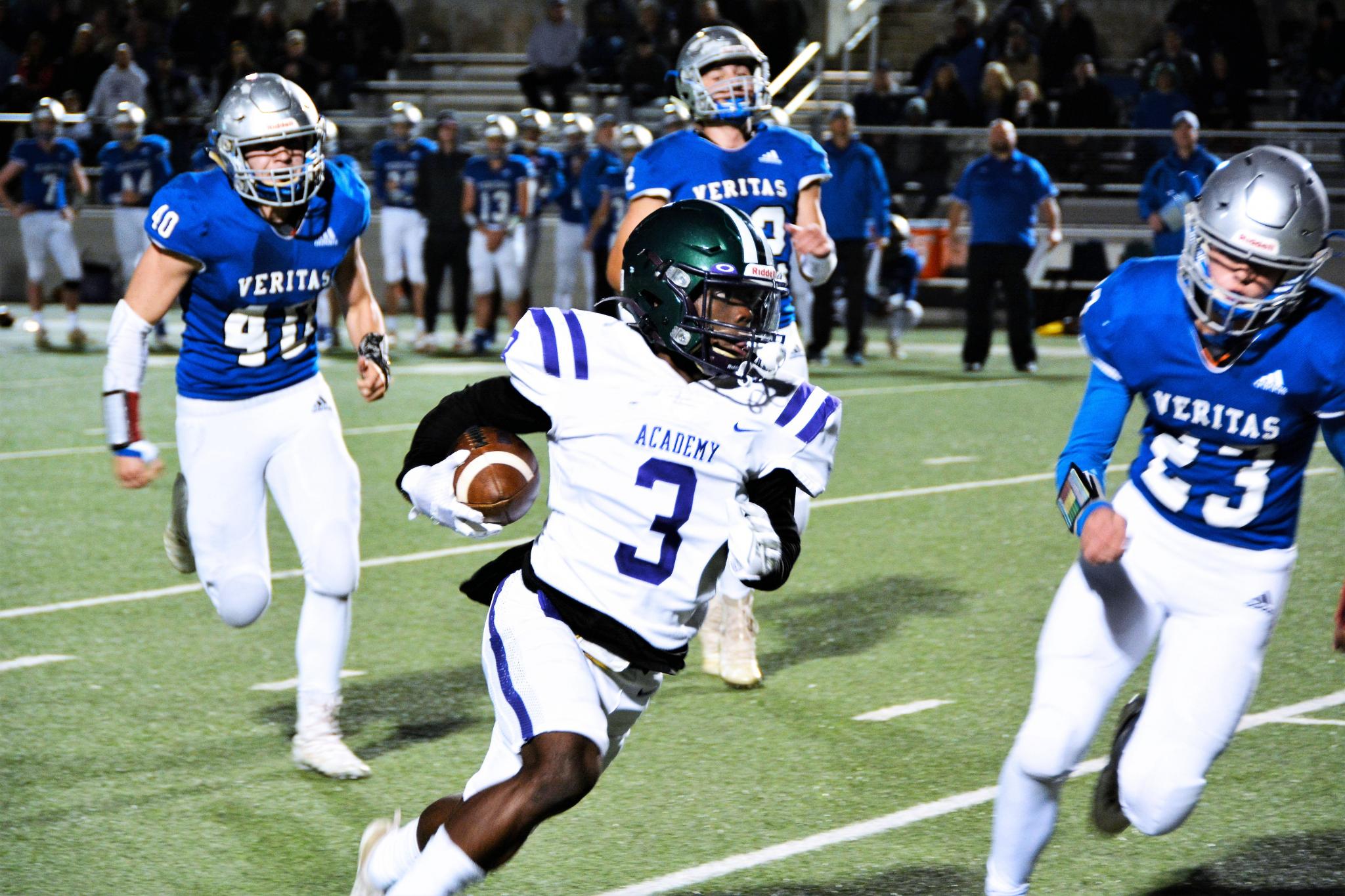 San Marcos Academy seized momentum with two plays around the goal line early in the first quarter. Senior Mason Loep touched the ball on both of them. The Bears had the ball on the first drive of the night in the TAPPS playoff semifinal against the Austin Veritas Academy Defenders.

Ebbs and flows created an adventure of a drive. On 4th and goal from the 19-yard line, the Bears did not hesitate to leave the offense on the field. Junior quarterback Mitchell Howard took a quick three-step drop and threw a moneyball to Loep on a corner route in the back of the end zone.

On the Defender’s ensuing possession, a deep pass was completed down the left hash to Bryan Hancock, and the receiver had eyes on the goal line. Loep had his eyes on the ball.

“I saw (quarterback Tyler Metro) just go to throw it deep,” Loep said. “I hauled my butt over there and I went and just punched it out. I knew it was a big game, so I went, I studied film and non-stop. I looked at all their games.”

Loep finished the night with two touchdowns, two interceptions, and a blocked kick.

The ball was placed at the 20-yard line for a touchback and the Bears marched down the field for a 26-yard score by senior Chizi Efobi on a quick static handoff from a bunch formation. A lead accompanied the Bears for the rest of the evening on the way to a 74-46 victory. The lead was as large as thirty at the end of the third quarter. Veritas did not go away quietly, but could not get enough stops on defense to close the gap.

SMA (10-3) and Veritas (10-2) squared off earlier in the season on Oct. 22. The Defenders ran the ball anyway they wanted and rolled to a 64-44 victory. The rematch was a far cry from the first meeting.

“Having all the horses and everybody being on deck and being able to utilize our depth, you know, having guys back healthier and just being able to adjust, it's hard to beat a team twice.” head coach Chris Chacon said. “A good week of practice, preparation, lots of diving into film and the kids just literally making the choice to make a difference a second time around here and they absolutely did. (Junior Blanco) help(ed) us in that bunch where he's a load to handle in the interior, and we just followed that young man tonight. We have the size and we have the depth … Then when it was time to go NASCAR, which is what we call our speed group, they were going to be playing from behind. ”

The horses were excited to leave the barn and pull the wagon one step closer to a state championship. Senior Jacob Hammock was a key tackler on defense all year, and he took a larger role with the offense this week as well. Hammock finished with 43 yards and made the defense think twice about hitting him while he was running down hill. Junior Preston Ramos and sophomore Mason Groves flew around on special teams.

Chizi Efobi had explosive plays from scrimmage by beating Defenders to the edge. However, his most impressive play of the night was a field-length kickoff return for touchdown. Efobi’s feet briefly touched the Bear’s end zone while he cradled the careening kick into his arms. Next he dashed up the left side of the turf. A hard cut to the right side a few yards before midfield followed, along with a block from Groves. His rapid cut and acceleration outflanked the Defenders’ kickoff team, and he sprinted his way along the sideline tightrope to pay dirt.

Another season-long defensive stand out, T.J. Murphy, was shining on offense as the front half of the center to quarterback exchange. He not only helped create the push upfront with Junior Blanco, he was also on the receiving end of a touchdown pass.

Cole Krackau broke free on a long run to put the game on ice with 3:08 left in the fourth quarter. He ran up the left hash and was engulfed in a mass of Defenders. His legs continued to churn as he moved with the pile. In true escape artist form, he eventually spun out of a tackler’s grasp and bolted up the right sideline for the score.

“We're just trying to fight for yards so we can just make the clock go down,” Cole said. “Then I see a cutback lane and then one of their backside guys comes and hits me, but I guess they all thought the play was over. I spun off and I did a stiff arm and then just outran.”

The Bears have an armory full of scoring weapons. A few were unleashed each game throughout the season. Friday was all systems go, and everyone was in on the action.

San Marcos Academy will play in the TAPPS state title game against the undefeated Houston Emery-Weiner Jaguars, on Thursday, Dec. 2 at 3:30 p.m. at Waco ISD Stadium.