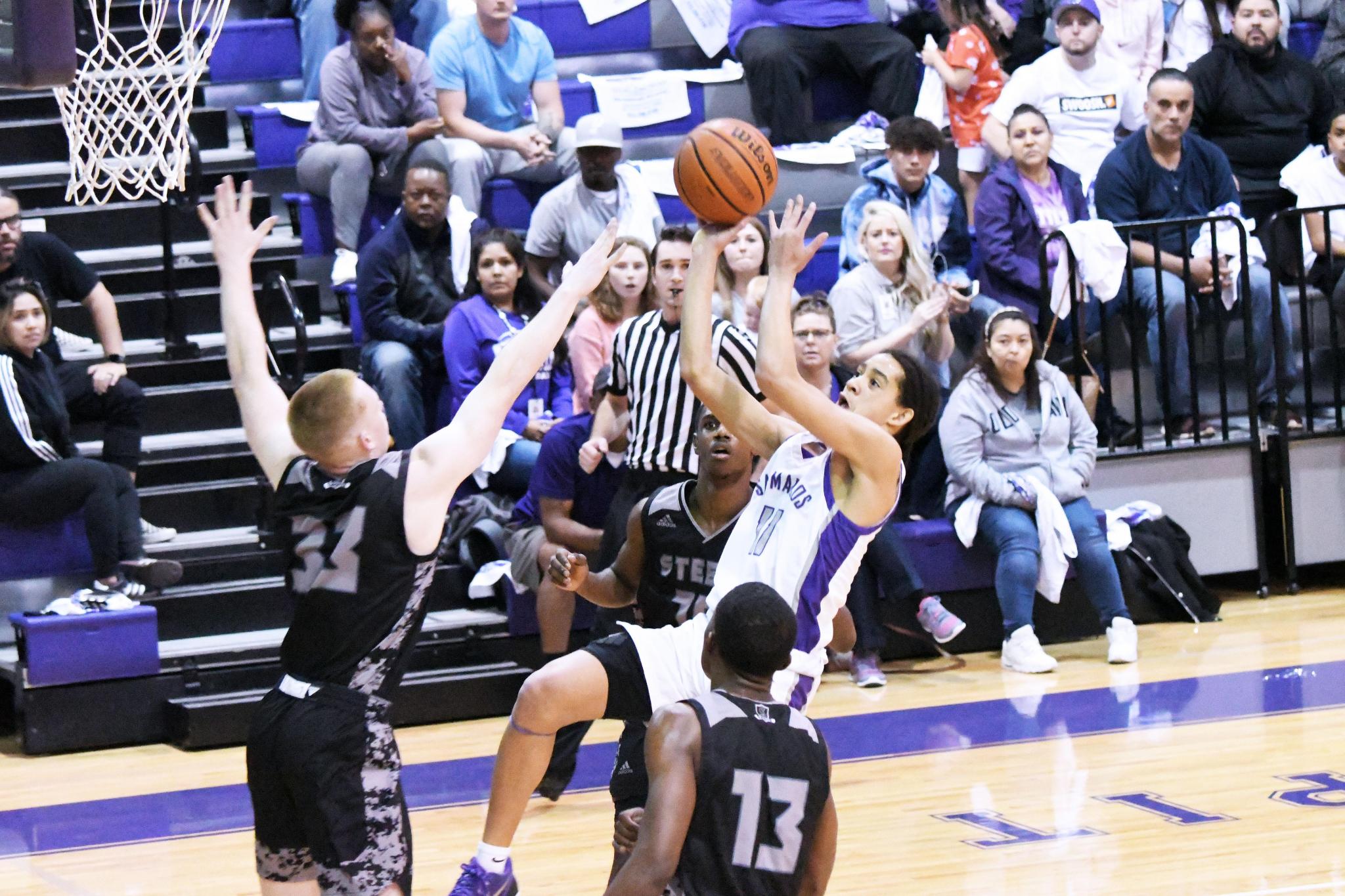 The style of basketball has shifted over time from a slow-paced, halfcourt offense to a game of transition 3-pointers. From guards to bigs, the visiting Knights knocked down a dozen 3s on San Marcos’ defense Friday inside the Snake Pit. Even in the second half, when the Rattlers extended the zone to put pressure, it seemed like the Knights would never cool off. The barrage of 3s, in addition to the youth of the hosts, prompted an 84-67 loss at home — the first home loss of the season.

Four freshmen start each night for the Rattlers and with only two district games under their belt, they were faced with taking on a state tournament semi-finalist from a year ago. Though the team has a new look with the loss of four-star recruit Langston Love, the Knights have been dominant as of late in San Antonio. Steele opened the game on an 8-0, including starting off 3-3 from beyond the arc. Freshman guard Kaden Gumbs ended the run with a Manu Ginobili-Esque euro step that froze the defender. His team was able to hang around, but Steele’s six 3s in the first quarter gave it a 26-20 lead.

Head coach Steven Pinchback thought his team could have responded to the adversity better. But when a team shoots lights out, it’s hard to keep up no matter what you do.

“I think they shot the ball extremely well. (Steele head coach Lonny Hubbard) does a good job. You know, I know these guys from over there. One of my best friends from back home, his son plays out there,” head coach Steven Pinchback said. “I haven’t seen them shoot the ball that well since I’ve been watching them. I’ve seen them a few times and I’ve watched a lot of tapes. We have to learn from it. We’ll learn from it and get better, I’m not worried. Everybody has to play the three teams that we just started with. Now we get to play other people, so let the chips fall where they may. I told them we didn’t win or lose anything because of that. We’re still in the hunt. We’ll be fine.”

Senior guard Josh DeLeon took no time chipping into the Knights’ lead by finding the lane for a finish. But Steele immediately went on a run that put them up 12, the largest deficit of the game at the time. That wouldn’t stop Gumbs from continuing to find the bottom of the net. He shifted his defender with a combination of three moves, getting to his sweet spot and knocking down a shot down from the right elbow. Steele grabbed a 48-35 halftime advantage.

Even with the lead, the 3-point barrage continued. The first make of the second half was a trey for the Knights. Gumbs spun baseline, losing his defender and hitting a pull-up. But three is more than two, which proved vital as the game went on.

Down by 13 to start the fourth, the Rattlers picked up the intensity looking to make a run at a comeback. DeLeon found his stroke with a 3 to start the quarter, allowing Presley to take advantage of the defense crowding the 3-point line for the rest of the game. The foul against the visitors put San Marcos in the bonus. The team got foul calls in the fourth but struggled with free opportunities, going 6-13 from the charity stripe down the stretch. The free throw woes mixed with the timely scoring of the visitors handed the hosts their first loss at home this year.

DeLeon finished with a team-high 24 points, four rebounds, and three steals, closely followed by Gumbs with 19 points of his own. Junior guard Beau Cervantes led the Knights with 17 points. The Rattlers were without four players due to injuries but Pinchback doesn’t believe it’s a reason for the Rattlers’ loss. They got the stops but didn’t capitalize offensively.

“We had opportunities to have some layups and make some shots early in the third quarter. Three, four, five possessions in a row we were empty and they were empty on their side as well, then they started hitting some shots so we just have to figure it out,” Pinchback said. “We’re gonna be fine, so that’s our message when the game is over, ‘Pick your head up guys, we’ll be OK.’ The offensive stuff it’ll be there. I just wanted them to continue to play the way we did and not try to change a whole lot.”