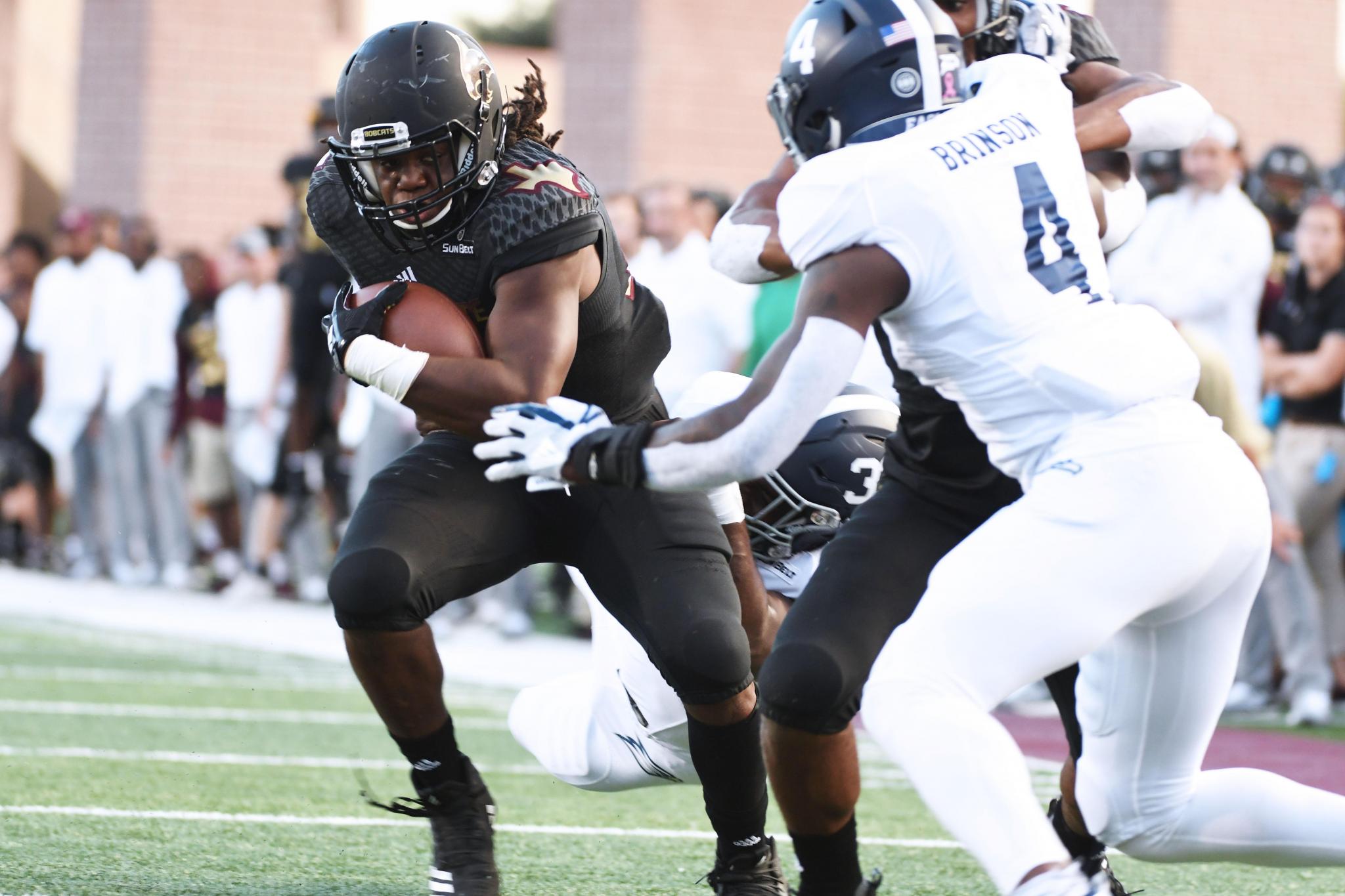 Season at a Glance

Texas State only saw minimal gains in 2018. After back-to-back 2-10 seasons, the Bobcats only registered one extra win last season, finishing the year at 3-9. The athletic administration decided it was time for a change and pivoted to its third head coach in the FBS era.

Former West Virginia offensive coordinator Jake Spavital was selected for the job. A quarterback whisper with seven active signal callers currently in the NFL, Spavital is expected to revamp the team’s offense — which ranked in the bottom 10 of the NCAA last season. He’ll also be tasked with making sure the defense reaches its maximum potential after making strides last year.

Texas State has another gear to hit. The Bobcats are counting on Spavital to make the shift.

1. What impact will Jake Spavital’s impact be?

Spavital hasn’t been head coach for a single game yet, but he’s already got all of San Marcos buzzing with excitement.

Jake Spavital’s made a lot of changes to Texas State’s culture during the offseason, playing hip-hop music during practices, beefing up the Bobcats’ nutrition department, and making the team more accessible to the media and public. Those changes didn’t happen overnight, though. And neither will the ones that take place on the field.

2. What is the defense’s ceiling?

Texas State had the No. 5 defense in the Sun Belt Conference in 2018, allowing 383.9 yards per game. Almost everyone returns this year, placing high expectations on the unit. The Bobcats plan to start seven seniors in their season opener against Texas A&M on Thursday, with another five listed in the second unit.

The secondary caught up to the front seven’s talent level and now have a good mix savvy veterans and energetic rookies to contend for the top passing defense in the league this year. The front seven might be the most experienced of any other in the conference.

Jake Spavital joked that this is the first time Zac’s coached a defense that’s better than the team’s offense. Zac Spavital has the pieces to create something special. He just has to put them together.

3. Will the running backs provide stability?

Jake Spavital and Bob Stitt talked up the team’s running backs every chance they had in the offseason. The tailbacks gave the coaches some credibility in Texas State’s spring game, putting on strong performances across the board.

But the Bobcats were one of the most inefficient rushing teams in the Sun Belt last year, ranking ninth with just four yards per carry. No running back cracked 350 yards in 2018.

The maroon and gold will need the running game to materialize this season for the new offensive system to transition smoothly. Both Spavital and Stitt believe they have the personnel to pull it off. 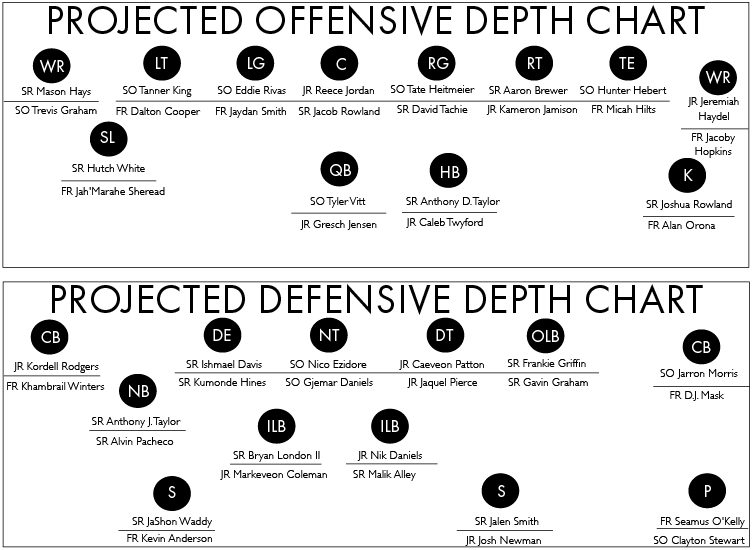 Notable: Vitt won a heated quarterback battle to claim the starting job. Head coach Jake Spavital said he chose Vitt for his ability to “galvanize” the team. He showed big-play potential throwing and passing last year, though his decision-making is questionable. The team did not win a game with Vitt as the starter in 2018.

Notable: Taylor’s turned heads during camp, becoming one of the toughest Bobcats to tackle. Still, Texas State will need him to improve his efficiency as the lead back this year after averaging 3.6 yards per attempt in 2018.

Notable: Haydel was explosive with his limited chances last season, finishing with the second-most receiving yards on the team despite tying for the fourth-most catches. The team will need Haydel to take the top off of defenses more consistently this year.

Notable: Sheread is one of the shortest players on the roster, but the slot receiver is tough to contain. “K-Dot” uses his elite agility and sharp route running to find ways to get open and make plays bigger than his size.

Notable: Brewer was named to the 2019 Rimington Trophy Watch List (presented to the top center in the NCAA), though the senior has played just about every position on the offensive line. Pro Football Focus gave him a 78.8 run-blocking grade last season, highest in the Sun Belt Conference, and Spavital plans to play to his strengths by starting him at right tackle to begin the year.

Notable: London’s been a constant backstop for Texas State the past three seasons and has emerged as one the nation’s top linebackers, as evidenced by being named to the 2019 Bronko Nagurski Trophy Watch List. With 340 career stops, he sits 58 and 108 total tackles away from the Sun Belt and Texas State records, respectively.

Notable: Daniels nearly took London’s tackling crown in 2018 and has a chance to do so again this year. The league’s taken note, voting him to the Preseason All-Sun Belt Second Team Defense.

Notable: Davis was a constant threat to opposing backfields last year, leading the team with 3.5 sacks and tying for most tackles for a loss with senior outside linebacker Frankie Griffin. Two seasons removed from a season-ending injury, Davis might look even more comfortable on the field this season.

Notable: Patton began to break out last year, ranking behind only Davis for most sacks on the team. Patton will be leaned on again to create havoc up the middle, along with sophomore nose tackle Nico Ezidore.

Notable: Morris broke Texas State’s interception cold streak by snagging one against Rutgers in the first game of 2018. The Bobcats will need the sophomore to take a step forward in his development to become a premier passing defense.

Notable: Senior defensive back Anthony J. Taylor called Anderson “one of the luckiest guys (he) knows” due to the freshman’s knack for being in the right place at the right time. Anderson picked off multiple passes throughout camp and figures to see a fair amount of playing time in the secondary’s rotation.

Notable: Hilts played wide receiver in high school for Vista Ridge in Colorado Springs, Colorado but the Texas State coaches converted him to tight end once he arrived in San Marcos. Hilts’ transition went extremely well, as the freshman made several flashy catches during camp and worked his way up to the No. 2 spot on the depth chart.

Notable: The Melbourne, Australia native only committed to the Bobcats a few weeks ago but has already made an impression on the coaching staff. O’Kelly is the only freshman listed as a starter on the depth chart.

Notable: Rowland connected on 11 of 18 field goals at the University of Texas at Austin in 2017, but lost his starting job last season and transferred to Texas State in June. The Bobcats were second-to-last in the country with a 42.9 field goal percentage and third-to-last with an 87.1 extra point percentage. Rowland should help improve those numbers.

Everything clicks under the new coaching staff. The defense becomes the top unit in the Sun Belt and the offense hits a stride with Tyler Vitt. Texas State turns a few close losses from last year into victories, finishes the season at 7-5 and heads to its first bowl game since joining the FBS.

Both sides of the ball take a step back under the new regime. The offense remains inconsistent and the defense loses its chemistry. Texas State repeats at 3-9 and loses a large senior class with little to show for it.

Spavital steers the Bobcats in the right direction as the team works through the growing pains of learning a new system. The experienced defense performs as-advertised while the offense begins finding its way. Texas State finishes the year with a 5-7 record, with an eye on bowl eligibility next year.