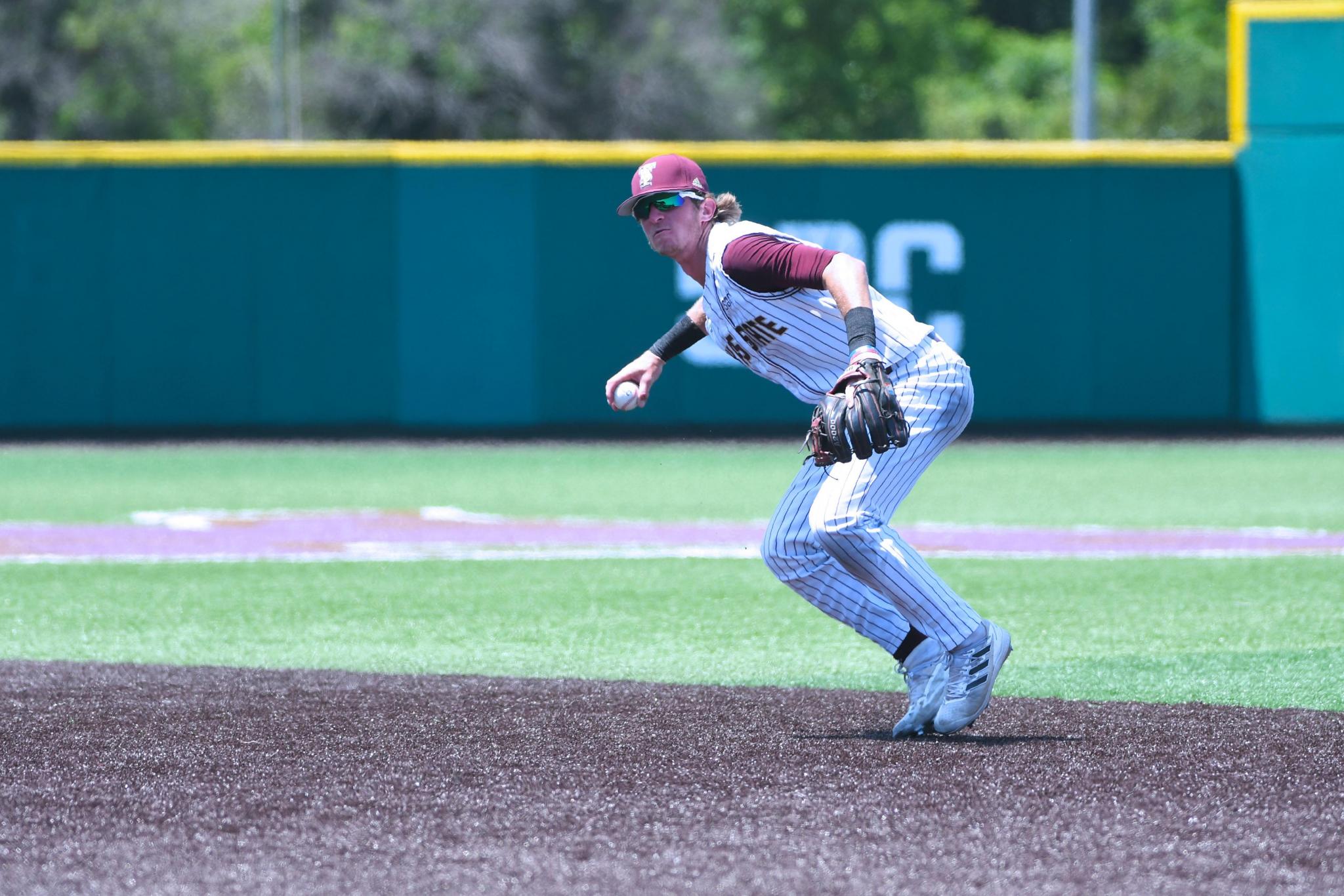 Texas State Baseball claimed a share of its second-ever Sun Belt championship over the weekend, sweeping Louisiana in the team’s final home series of the season.

“When you set your goals up, one of the first ones is winning a conference championship,” head coach Steven Trout said. “And so you know, we’re one win away to make that happen outright. And then to go along with it, we’ll have other goals that we’ll get to accomplish. And so this team’s put ourselves in a great position for the postseason. But we’re not done yet, we’ve got a lot to play for and a lot left to go.”

After Louisiana scored a run in the top of the first, redshirt junior outfielder Ben McClain led off the bottom frame with a base hit and Shuffield and Thompson followed up with RBI doubles, pushing Texas State in front, 2-1. Junior catcher Peyton Lewis sent a solo home run to right centerfield to extend the gap. But the Ragin’ Cajuns came back with a run in the fourth and two in the fifth to take back the lead, 4-3.

Shuffield got on base with a single in the bottom of the eighth, advanced to second on a groundout in the next at-bat, then stole third base on a failed pickoff attempt. Thompson swung for a sacrifice fly to plate him and knot the score up. Faison was walked in the next plate appearance and Wuthrich launched a two-RBI homer to give the Bobcats the lead again and help secure the 6-4 win.

“I mean Trout still talks about his senior day at TCU. And that was 10, 20 years ago, however long,” Wuthrich said. “So this is something that we’ll remember for the rest of our lives, this game will stick out more than others. So getting a big win and having it be in such a, you know, kind of dramatic fashion and in such a meaningful game, it’s really cool for us and something that I’ll for sure never forget.”

Louisiana came out strong the next day, posting two runs in the top of the first. Texas State responded by scoring nine combined runs across the next three innings — with two home runs and a single from junior outfielder Jose Gonzalez bringing in six RBIs.

Both teams scored two runs each in the seventh. The Cajuns (30-20, 17-10 Sun Belt) hung a five-spot in the top of the eighth but weren’t able to complete the comeback, falling 11-9. The hosts ended the weekend with the series sweep and clinched a share of its first conference title since 2019.

Jose Gonzalez (@JGonzalez0815) swing for a GRAND SLAM off the batter's eye, pushing #TXST up 9-2@kylejowen12 can confirm that I called it pic.twitter.com/t4lReuWr6w

Tristan Stivors, who already broke Texas State’s career record for saves, picked up three more over the weekend and now leads the nation and holds the program’s single-season record with 15. The team also moved up two spots in the D1Baseball.com national poll to No. 15.

The Bobcats (41-11, 23-4) were scheduled to play Houston Baptist in their home finale on Tuesday, but the game was canceled after a mutual coach’s decision. The maroon and gold now need one more win — or one more Georgia Southern loss — to earn the Sun Belt regular season championship outright. They’ll compete in their final series of the season on the road this weekend at Georgia State (30-23, 15-12), playing in Atlanta Thursday at 5 p.m., Friday at 5 p.m. and Saturday at noon.

“I mean, there’s been some unbelievable teams to come through this program. And this team is obviously about to be one of the best,” Trout said. “And so, they’ve just put their heads down, they’ve gone to work, they’ve bought into everything we’ve asked them to do. But if you ask them, they’re still very hungry. They’re not satisfied just by setting records. They want to go do something we’ve never done before. And so we’ll get back to work on Tuesday with that and go get after it.”