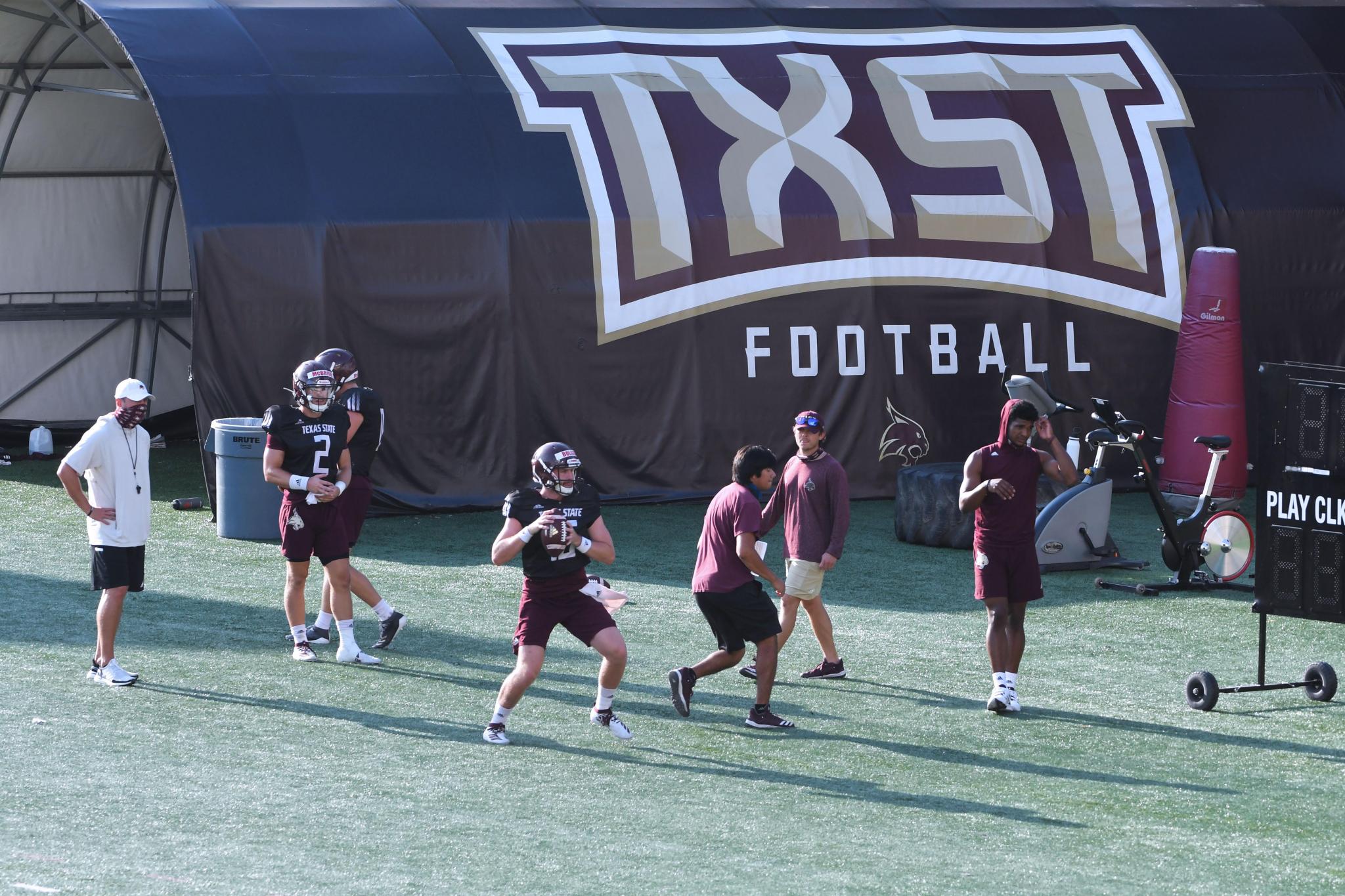 Texas State has over 50 new players who still haven’t introduced themselves to the team.

The school phased in roughly 60 Bobcats in early June to begin voluntary workouts. They phased in another 30 at the beginning of July to start organized team activities (OTAs) and just started their fall training camp on Monday.

But so far, team meetings haven’t focused on the vision second-year head coach Jake Spavital has for his program. They’ve mostly been about how to navigate an upcoming football season during the middle of a global pandemic in the safest way possible.

“The thing that I can say that we’ve been doing here at Texas State is we’ve been working through all of these unprecedented times together,” Spavital said. “Everything that we’ve done in the past has changed. The way we practice, the way we lead, the way we eat, the way we do treatments, the way we do ice baths. You know, the way we do anything in the future is going to change … It’s not perfect by any means on how we’ve approached the COVID protocol, but we work through it all and we make sure that we’re putting our student-athletes in a very safe environment.”

Players have been receiving daily screenings from the Texas State Student Health Center for possible COVID-19 symptoms. The team announced five players had tested positive for the virus upon arriving to campus in June but Spavital said no one has tested positive since.

The team has been using guidelines and protocols provided by the Centers for Disease Control and Prevention (CDC) to limit the risk of exposure at practice. However, the guidelines change regularly and each update requires a team briefing, cutting out chunks of time Spavital would normally use to help build chemistry between his players.

“We’re having discussions non-stop, so I feel confident of where we’re at from that standpoint. But again, like I said, it’s never perfect,” Spavital said. “You know, we’re dealing with 18- to 22-year-old kids. When they go into the locker room, you’ve gotta move them out as fast as possible and it’s tough to do at times. We’ve got people monitoring them at all times, we’re moving them in and out, making sure, again, that we’re doing the right things. But I’m confident in it because we’ve had a lot of discussions over the last five, six months about this stuff.”

The return to the field has brought a small sense of normalcy for the Bobcats, though Spavital admits things are still extremely different from usual. The team meetings taking place are not in the film room, but rather on Jim Wacker Field in front of the jumbotron at Bobcat Stadium because the risk of transmission is lower outside.

The team is having to adjust to everything on the fly. One player, who Spavital was not allowed to name, has already opted out of the season. Texas State moved its 2020 season-opener against SMU up a week to Aug. 29 to give itself scheduling flexibility, which also moved up the start of training camp. Spavital said the team is actually ahead of schedule in installing its schemes thanks to the OTAs — for instance, the Bobcats were working on red zone scenarios on day four, which doesn’t typically happen until day six — but is still behind in other areas, like setting the culture.

The schedule isn’t set in stone either. Spavital said it could be altered again. One main concern is the two-game road stretch in which Texas State would play New Mexico State in Las Cruces on Oct. 3, then head to Troy, Alabama for a Thursday game with the Trojans four days later. All players have to be tested for COVID-19 prior to playing in a game. Spavital said test results can sometimes take up to six or seven days to be returned.

“(Moving the SMU game) was more about the flexibility of scheduling and making sure (we had) a dry run of the testing protocols and everything before you went into conference,” Spavital said. “We’re trying to spread it all out.”

Details on gameday procedures are still being ironed out between state and local government and medical officials and Texas State administration. Spavital said the number for the maximum stadium capacity for the SMU game has been yo-yoing between 25-50%, but that the school is leaning toward the lower number for the opener.

Spavtital said the newcomer Bobcats would get to finally introduce themselves in front of the entire team after Thursday’s practice, though the Bobcats’ daily to-do list remains constantly in flux.

“Today, we’re going to introduce the new guys and start getting into some culture talks and our team pillars. You would’ve liked to have done that a week ago,” Spavital said. “But again, it’s just different times and every single day we walk in, it’s going to be a new schedule and how we do things. Something else may pop up, someone else may have to come talk to the team, new doctor recommendations. And that’s kind of our whole deal right now, is just adapt on the run. Just make sure we know things are going to change and just be ready and just keep moving forward.”