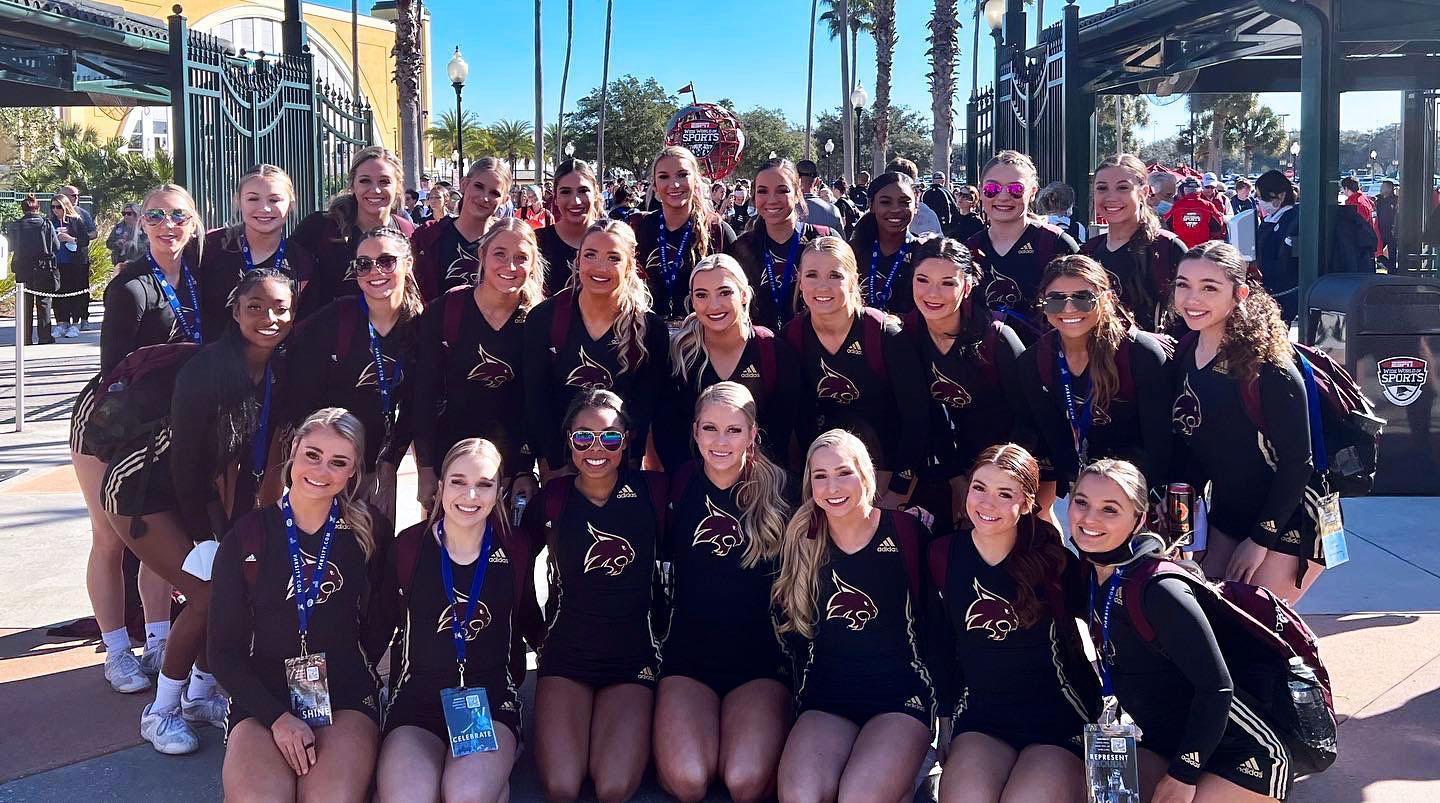 Texas State’s cheerleaders made a promise to each other before taking the stage for their final performance of the season: keep everything in the air.

The Bobcats were at the ESPN Wide World of Sports Complex at the Walt Disney World Resort in Orlando, Fla., competing in the Universal Cheerleaders Association (UCA) College Nationals. The maroon and gold’s all-girl team of 26 cheerleaders competed in the Division IA — the highest level in the sport — and finished in 10th place with a score of 81.5.

“If I could describe their performance in one word, it would be ‘fight,’” head coach Jocelyn Stephens said.

Texas State’s preparation for the event typically begins near the end of the spring semester. Stephens holds tryouts for every roster spot on the team in April or May. Every returner has to earn their place on the team, along with students already at Texas State who want to join the team and incoming freshmen.

The Bobcats had 10 returners on this year’s squad, making it what Stephens considers “a very young team.”

“As soon as the member that's selected makes the team at tryouts, I kind of tell them every day from that point is a tryout,” Stephens said. “You know, not to put them in a place where you feel like every day they have to prove yourself. But every day you need to work towards why you earned a spot on the team.”

The maroon and gold train on campus over the summer and also attend a UCA College Spirit camp to set a foundation of skills, learn school traditions and bond as a team. During the fall semester, the group cheers at all home football, volleyball, and men’s and women’s basketball games while blending in preparations for the national meet.

The cheerleaders get a condensed winter break compared to regular college students. Nationals usually falls the weekend before the spring semester begins, meaning they have to come back to campus sooner to get ready for it. Without many events to cheer at, it’s a time that the team can focus on itself and zero in on the skills they plan to showcase.

Stephens wanted to incorporate a number of new skills into the Bobcats’ routine this year, such as “rewinds” — a stunt in which flyers are lifted into the air, perform a back tuck and land on their feet midair, being caught by the bases. The head coach also noted the team had 15 athletes throw tumbling skills.

“Which, in my five years since I've been here, we haven't had that high of a number,” Stephens said.

Texas State took 26 cheerleaders to Nationals. Four took part in a partner stunt competition at the event. Twenty performed in the final routine — a moment that the Bobcats train for year-round but only lasts two and a half minutes.

After walking off the stage, the team came together to watch a replay of its performance. The cheerleaders kept their promise. Everything was kept in the air.

“For me as a coach, seeing just their character and drive shining through, there's honestly nothing more than I could ask from them,” Stephens said. “We have a very young team, so we're definitely hungry to come back for 2023.”