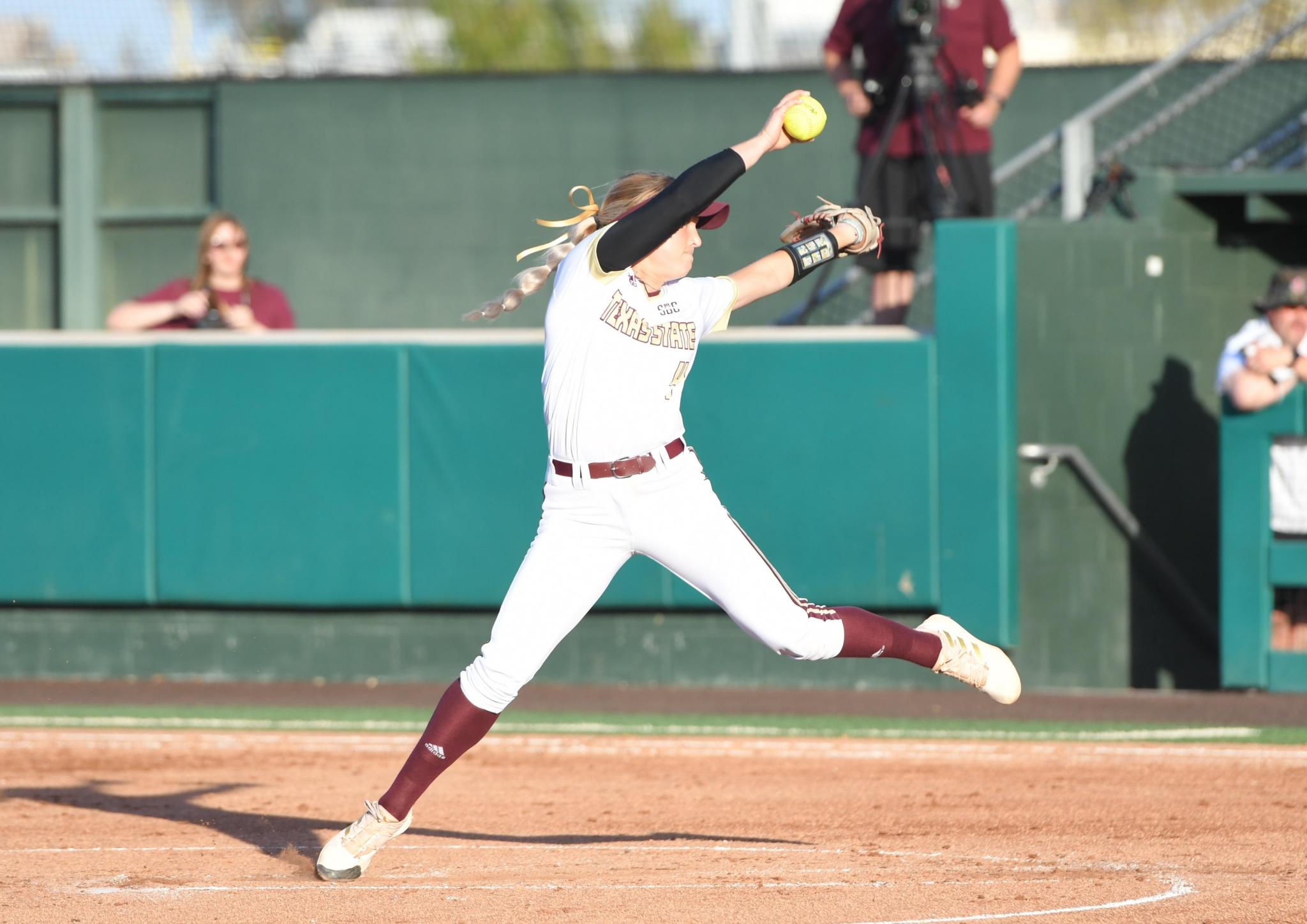 After Friday’s 1-0 loss in the series opener against Lousiana, Texas State head coach Ricci Woodard said she wanted to see her team do a better job of executing at the plate.

It took a while for the maroon and gold to find their groove, suffering an 8-1 run-ruling in five innings on Saturday. But the team finally got into a rhythm on Sunday, taking the Ragin’s Cajuns down 5-4 inside Bobcat Softball Stadium to avoid the series sweep.

“We battled today,” Woodard said. “You know, I thought we battled the first game, too. We didn't do a good job of battling yesterday but I thought Friday, that game could have gone either way, too. But today we just kept battling, which is something we talked a lot about yesterday after the game, is we gotta continue to battle and find ways to win ballgames at the end of the game.”

The visitors jumped out to a two-run lead in the top of the second inning, but the hosts tied it up in the bottom of the third. Freshman left fielder Ciara Trahan led off with a base hit to the shortstop and advanced to second base on a wild pitch. Graduate first baseman Dani Elder grounded out in the next at-bat, moving Trahan to third.

Sophomore centerfielder Piper Randolph singled to left field, plating Trahan for Texas State’s first run of the day, then stole second. Sophomore shortstop Hannah Earls put the ball in play, advancing Randolph to third, and an error at first base allowed Earls to reach and Randolph to score, making it 2-2.

Sophomore starting pitcher Jessica Mullins held Louisiana scoreless in the second, third and fourth frames. The Ragin’ Cajuns had been aggressive at the plate all weekend, failing to draw a walk against Mullins in the first or third games of the series. Mullins credited her teammates for assisting her in both performances.

“Really, what was working the best for me is having my team behind me because we played the best defensively that we've ever played this entire season,” Mullins said. “And I couldn't have done it without them. It's just their fight and their grit is really what won that game.

“I didn't come into these games knowing that I would get so many strikeouts. I just wanted to come in and just pitch to contact and let my defense do the work behind me.”

As Mullins held Lousiana (23-9, 9-3 Sun Belt) in check, the Bobcats (19-15, 6-6) took the lead. Earls led off the bottom of the fifth with a walk, senior designated player Cat Crenek reached on a fielder’s choice, junior third baseman Sara Vanderford dropped a sacrifice bunt to move both runners into scoring position and sophomore right fielder Anna Jones sent a sacrifice fly to centerfield, allowing Earls to tag up from third and put Texas State in front 3-2.

The Ragin’ Cajuns weren’t finished yet, though. The visitors led off the top of the sixth with a ground-rule double and junior designated player Karly Heath drilled a two-RBI home run over the left centerfield fence three at-bats later to put Louisiana back on top, 4-3.

Senior catcher Caitlyn Rogers answered by swinging for a base hit to lead off the bottom frame. Junior Tori McCann went in to pinch run for Rogers and the Cajuns switched pitchers for the first time all game. It didn’t help much — Trahan was hit by a pitch, Elder laid down a sac bunt to move both runners into scoring position and Randolph drew a walk, loading the bases with one out.

Louisiana put its starting pitcher back in the game and Earls sent a ground ball to the shortstop in the next at-bat, who fumbled it and allowed the game-tying run to cross the dish. Crenek launched a sac fly to centerfield, plating Trahan for the go-ahead score.

“We got some key bunts down that we did not get down the other night. And we got some hits, long flyballs to score runners,” Woodard said. “You know, we put the ball in play much better today and executed our game plan better today.”

“One of the things we really focused on (Saturday) after the game was we gotta have more fight, we gotta have more battle. And you know, I talked about a baseball team not very far from us that's won a lot of games, late in the game. And that's just being able to battle and find ways to win, so that's how I want this group to be from here on out. And I thought, again, they showed up today and did a great job with that.”

Mullins gave up a base hit in the second plate appearance of the seventh, but sat down the next two batters to seal the 5-4 victory for Texas State. It was the second complete game of the weekend for the right-hander, who finished the day allowing seven hits, no walks and two earned runs while striking out four — Mullins improved to 13-10 on the season.

“I think every single one of us had every single fiber in our bodies wanting to win this game,” Mullins said. “You know just, we did not want to get swept by this team. We believe that we are the better team and we just beat ourselves sometimes. And we just wanted to come out and show everyone that we can defy the odds and we can do what we need to do to win games.”

The Bobcats will play on the road all next week, taking on Sam Houston State (10-27, 4-8 WAC) for a midweek matchup on Thursday at 3 p.m. before heading east for a three-game series against Louisiana-Monroe (18-14, 4-8) beginning Friday at 6 p.m.