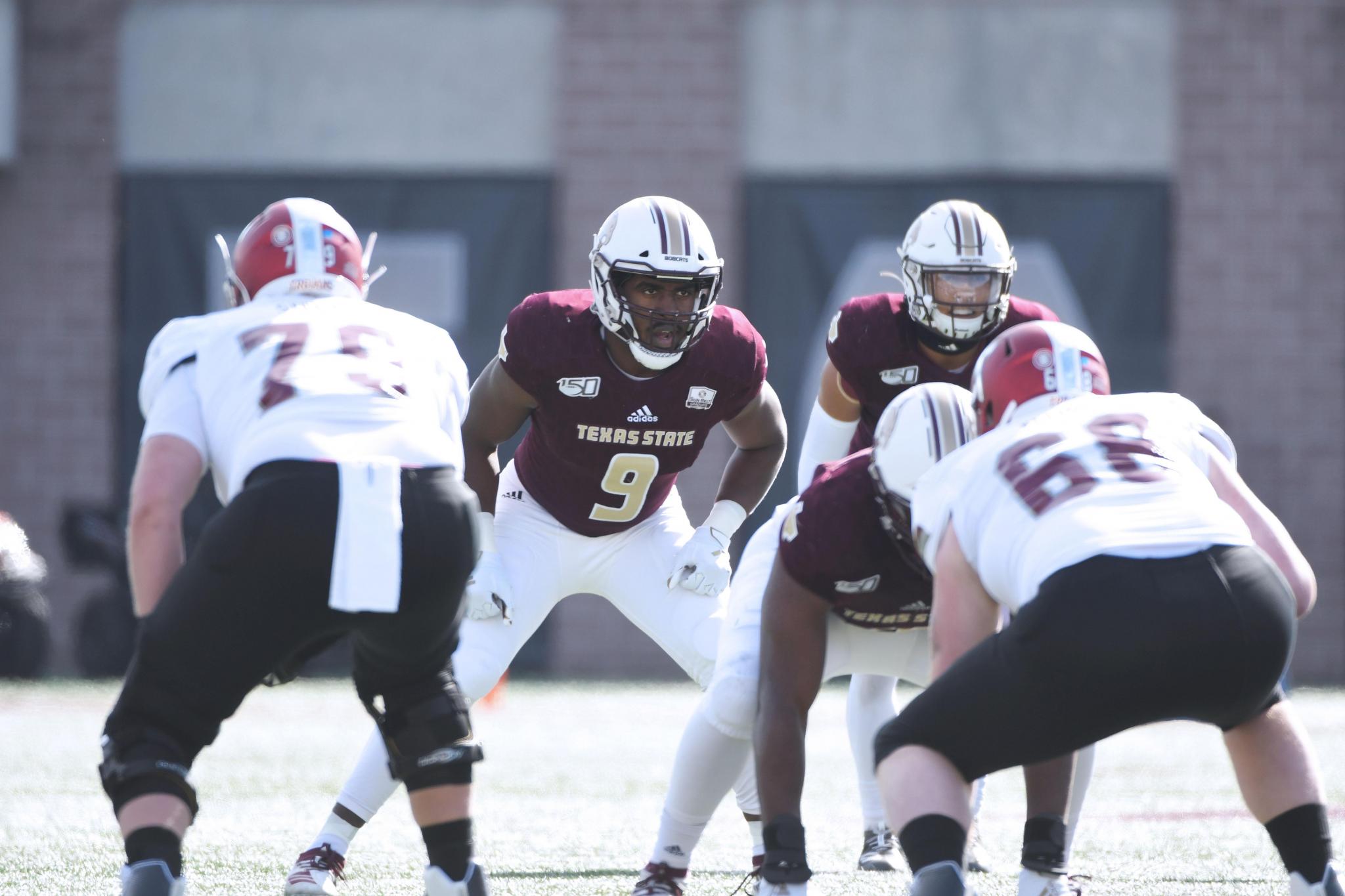 There’s still a lot to play for in Texas State’s final game of the season.

Senior defensive back Anthony J. Taylor and linebacker Bryan London II are both trying to cement their places at the top of the maroon and gold record books. Taylor tipped his 12th pass of the season last Saturday in the team’s 35-13 loss at Appalachian State. He’s now in a four-way tie for most pass breakups in a season, along with Bobby Watkins (1980), Nicolas Jack (1995) and Craig Mager (2011). One more this week would separate himself from the rest of the pack.

London became the No. 2 tackler in program history on Saturday, passing Brad Fulks (1985-88) with 444. The Converse native now needs four more to pass Greg Pitts (1999-02) to become the all-time leader in stops.

“Whatever it’s at is going to be very hard to catch up to,” head coach Jake Spavital said. “It’s just, you gotta play four years of solid football. I think if he finishes at 450 career tackles, I don’t know how many people have done that in the country or at a certain school. So his impact’s going to be lasting here for a long time because I don’t know if anybody’s gonna ever break that record.”

The Bobcats also have the chance to win the last game of the season for the first time since 2014, when the team defeated Georgia State on the road, 54-31. A win this week would also secure the best record for Texas State since the same year.

It’s all weighing heavily on the seniors as they head into their final contest as student-athletes.

Texas State (3-8, 2-5 Sun Belt) draws Coastal Carolina (4-7, 1-6) as its opponent in the regular season finale. The Chanticleers have built a reputation for keeping games close this season, as six of them have been decided by seven points or less (the team is 2-4 in those games).

Coastal Carolina, the No. 7 offense in the conference, splits quarterback duties between sophomores Fred Payton and Bryce Carpenter. Payton’s thrown for 1,378 yards, 11 touchdowns and seven interceptions this year. Carpenter gives the Chanticleers a dual-threat option, gaining 813 years, seven touchdowns and two interceptions through the air and another 380 yards and a score on the ground.

Spavital said he’s been impressed by the way head coach Jamey Chadwell has utilized the two.

“I’ve never seen an offense change identities like this before,” Spavital said. “Like, they had a quarterback that could spread it out, move it around and then all sudden it’s just, the injuries happen, so they gotta adjust to what’s best for them. And I think where they’re now finding their niche, right now, where they’re doing this triple option stuff — which is tough to defend now, I’m telling you. And you look at this offense and what they’ve done, it puts them in positions to win every single game.”

The team also boasts the No. 4 defense in the league. Spavital said the main focus of CCU’s defense is to eliminate explosive plays, always keeping the ball in front of them.

“Running the football, they’re going to give you a favorable box to run the ball into. You should have some opportunities out on the perimeter with some stuff,” Spavital said. “But they play hard, they all know what they’re doing, they’re sound with what they’re doing. They’re playing good, complementary football right now in my mind.”

Texas State will head to Conway, South Carolina to take on the Chanticleers this Saturday at 11 a.m. Both teams will be looking to snap their respective losing streaks.

Davis, now in his sixth year as a Bobcat, called his time in San Marcos a “blessing in disguise.” He said he and the other 21 seniors on the team will be looking to finish the year out on a high note.