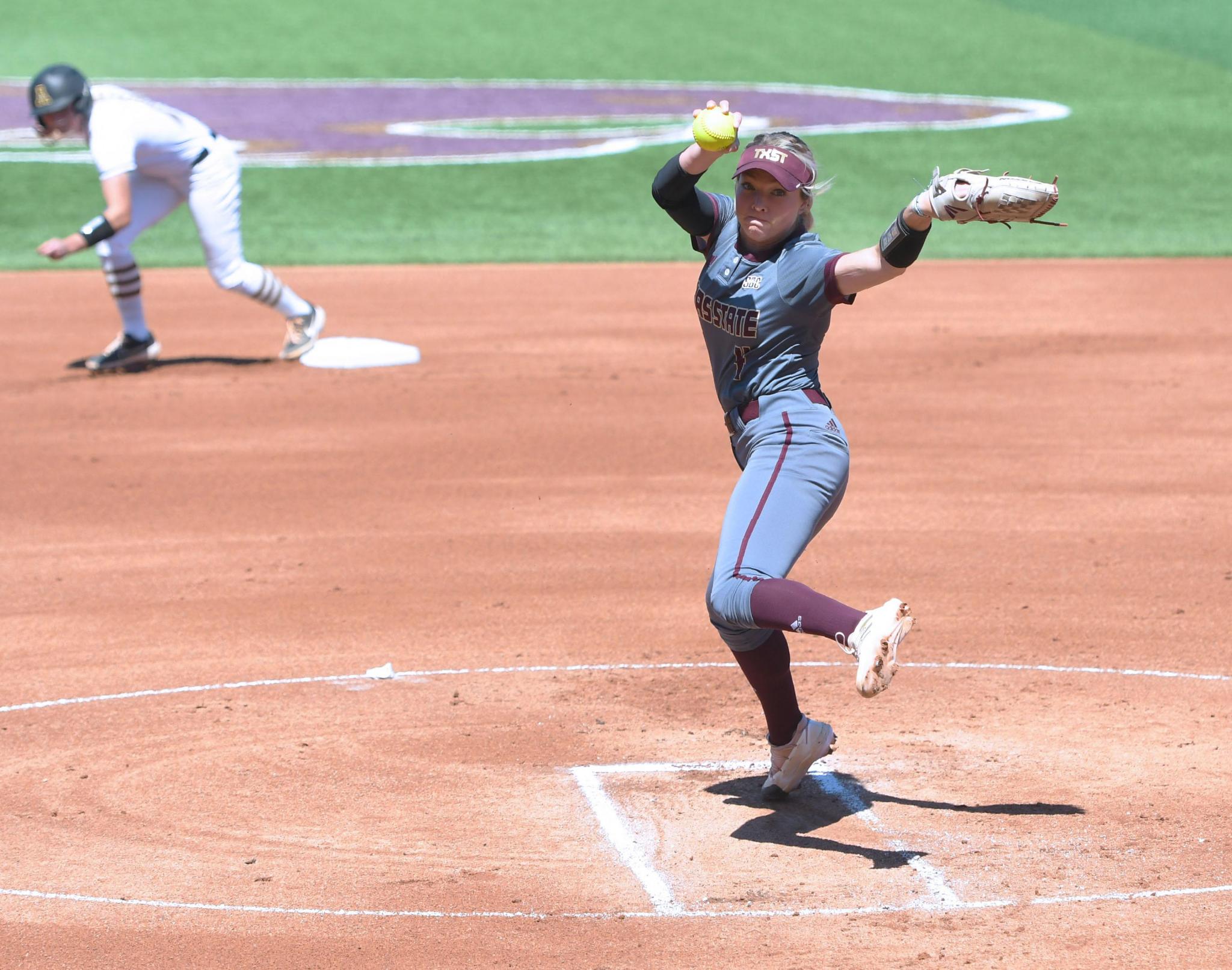 Texas State head coach Ricci Woodard knew it would take time for her team to gel.

The Bobcats, coming off a successful 2021 season in which they posted a 39-14 overall record and reached the NCAA Austin Regional, lost six of its seniors in the offseason, each of whom played important roles on the squad. Woodard sought out newcomers who could step in and immediately fill the holes within the roster.

Almost three-quarters of the way through the 2022 season, the maroon and gold were still struggling to click. After a 10-2 run-rule loss to ULM on the road on April 9, they’d fallen to 20-17 on the season, dropping four of their first five Sun Belt series. At times, Woodard questioned her players’ competitiveness.

But Texas State went out the next day and won the final game of its series against the Warhawks, 4-1, avoiding the sweep. The team hasn’t lost a game in the month since.

“They just got more consistent,” Woodard said. “You know, I think they started showing up every day getting after it. They didn’t like losing, I think that’s what it boiled down to. And so, now when they show up to the ballpark, they’re ready to play. They’re expecting to win when they walk on the field. It’s just got a different feel to it.”

“It’s nice to see it kind of go full circle at this time of the season, that’s for sure.”

After punctuating the regular season with a 4-0 victory at UT Arlington on Saturday, the Bobcats are now riding a 15-game winning streak heading into this week’s Sun Belt tournament.

Most of the fresh faces who earned a role this year came from the transfer portal. Trahan was the exception as one of five true freshmen that Woodard recruited. The Sante Fe native played and started in all but one game this season and tied for the third-most hits in the league with 55. She was one of six players to hit above .400 in conference-only games and finished second on the team with a .337 batting average.

Along with making the All-Sun Belt Second Team, Trahan was also named the conference Player of the Week and Freshman of the Year on Monday.

The Bobcats’ run of dominance has also coincided with an uptick in Mullins’ play. After receiving a loss in the series opener against ULM back on April 8, the Mont Belvieu Barbers Hill graduate had a 13-11 record on the year and a 2.35 ERA. She went on to take the win in 12 of the team’s next 15 games, improving to 25-11 and clinching 20 wins for the second time in her career.

Texas State’s ace led the league with 25 wins, a 1.84 ERA, 234 strikeouts and 212.2 innings pitched, earning her the Sun Belt Pitcher of the Year title on Monday.

“I’m so happy, not only for Trahan and Mullins, but everyone who was recognized by the Sun Belt this afternoon,” Woodard said in a statement Monday. “For Hannah to move from the outfield to shortstop and be selected as an all-conference performer says a lot about the person she is. And for Cat and (Rogers) being able to cap their careers with this honor is fantastic.

“It’s no secret we wouldn’t be where we are at this point of the season without Mullins and Trahan. Those two have been producing at a high level all season long, so it’s fitting those two were honored today.”

Woodard said the Bobcats couldn’t be in a better spot than they are now, entering the conference tournament as a very confident No. 3 seed.

“It’s the same thing I feel about everybody in this league, it’s that if you don’t play your best ball, you have a chance to get beat,” Woodard said. “It’s going to be the team that plays the best and executes the best that’s going to win this thing this week.

“We want to win it. You know, I’m hoping that they carry this competitive edge that they have right now all the way through. Right now, they’re in a pretty good spot of wanting to win ballgames, and I’m hoping they’re coming in here to win this thing.”