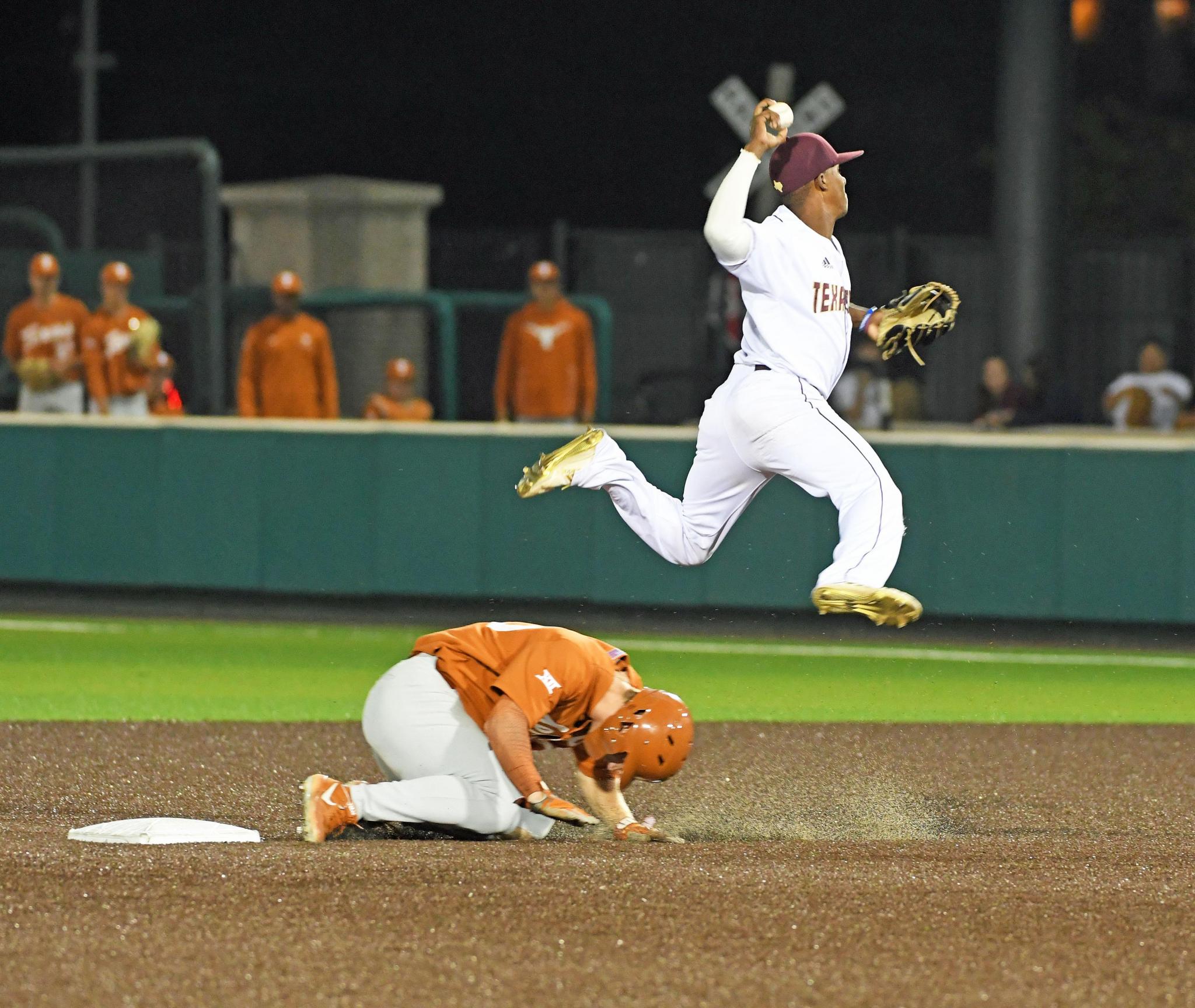 A moment of pure ecstasy as the Bobcats dogpiled on top of the redshirt senior center fielder. It was a celebration he had experienced only one time before. But nothing could compare to Tuesday’s jubilation.

Seconds before, Valentine ripped a single into left field with the bases loaded and Texas State trailing Texas, 6-5, in the bottom of the ninth.

“It’s every kid’s dream just to come out and hit a walk-off, especially against the University of Texas,” Valentine said. “Shoot, I can’t put into words the way it happened. I went up there and I could hear the breathe coming out of my mouth then I’m in right field getting dogpiled. It’s a dream come true. We’re rolling now. Nobody can stop us right now.”

The Longhorns used a two-out rally to get on the board first after junior right fielder Austin Todd hit a double and senior shortstop Masen Hibbeler scored Todd with an RBI single.

The Bobcats answered immediately in the bottom of the first. Wuthrich hit a groundout that allowed senior third baseman Jaylen Hubbard to score and tie the game at 1-1.

Texas State had two opportunities to hit a two-run home run in the third inning. But Kennedy robbed Wuthrich of a homer when he made an over-the-wall grab. Benton smacked a moon-shot deep into right field that Todd snagged to keep the ball in the park.

But the Bobcats wouldn’t be denied in the fifth. Junior left fielder Will Hollis lifted a ball over the left field wall that Kennedy couldn’t get his glove on. Wuthrich followed with a solo shot to give Texas State a 3-1 advantage.

But Texas rallied in the seventh when Hibbeler hit an RBI single to cut the Bobcat lead to 3-2. The Longhorns seized command when junior third baseman Ryan Reynolds blasted a grand slam to put Texas on top 6-3.

The Bobcats’ resiliency, however, showed off in the ninth. With one out, junior second baseman Jaxon Williams hit a hard liner that bounced over Reynolds’ glove for a double. Hollis followed with a two-run bomb to get Texas State to within 6-5.

Valentine came up to the plate with the bases loaded and one out. He was looking to make contact and get the ball above Texas redshirt sophomore pitcher Tristen Stevens’ head. Instead, Valentine poked it into left and the Bobcats brought home two runs to defeat Texas.

“We have a lot of resiliency,” Valentine said. “We don’t care what out it is. It could be two outs in the bottom of the ninth, we’re always going to play hard. We’re going to play hard until the last out is made and I think that’s what makes our team tough.”

Tuesday’s victory marked Texas State’s first win over Texas since March 21, 2017 when the Bobcats defeated the Longhorns, 11-10 in 10 innings in San Marcos.

After the win, the team believes it made a statement, showing that it's capable of beating anyone on its schedule.

“I feel like people always trying to play us because, I mean, we’re a mid-major team but at the end of the day, you’ve got to play the game of baseball,” Valentine said. “Anybody can beat anybody. If you go out there and play hard with the right mindset, let’s go. That’s our mentality as a team and we’re going to keep that up.”

With an all-time Bobcat Ballpark record crowd of 3,119 on hand, head coach Ty Harrington was glad he could reward the maroon and gold faithful.

“It was a win against Texas and it is special,” Harrington said. “(Texas coach) David (Pierce) and (the Longhorns) don’t have to come down here. I appreciate the idea that they come down here and play us. It’s big for our University and San Marcos, and tonight it went our way. I’m grateful and excited for our young people and for Texas State to get to enjoy this tonight.”