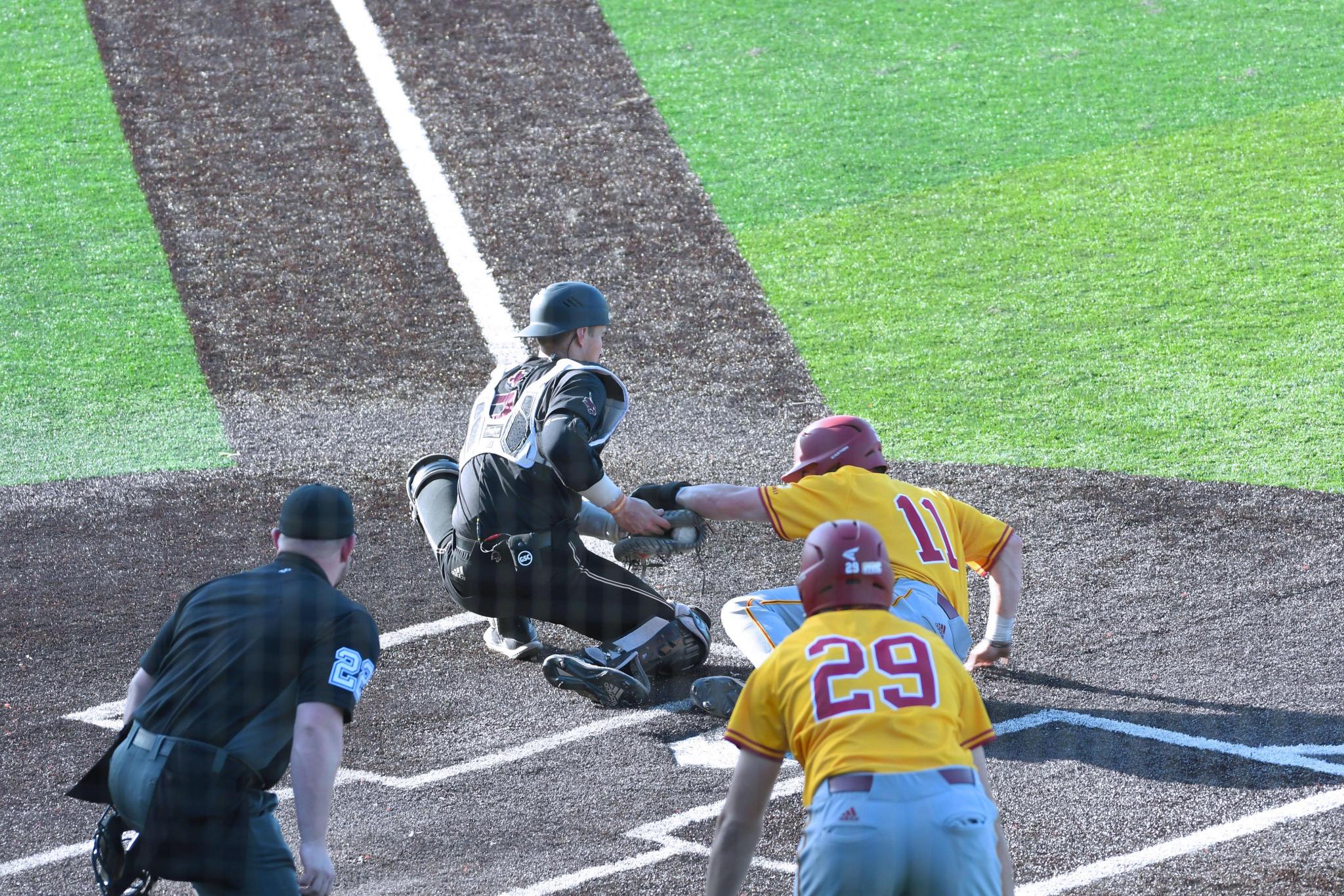 Texas State has struggled getting over the hump in series games this season. After the first inning of Friday’s game against Louisiana-Monroe, the uphill climb appeared to be much steeper for the Bobcats.

Warhawks junior leadoff hitter Trace Henry was hit by a pitch in his first at-bat, stole second base and advanced to third on a sacrifice bunt. ULM’s next batter was walked, putting runners on the corners.

In the next plate appearance, Texas State graduate Bryce Bonner, making his first start in left field, caught a fly ball for the second out of the frame and zipped the ball to senior catcher Tucker Redden. The ball beat Henry home and Redden tagged the runner before he reached the plate, but the umpire called Redden for obstructing and awarded Henry the run.

Bobcats head coach Steven Trout exited the home team’s dugout to argue the call but got too aggressive and was thrown out of the game. The visitors scored another three runs on two hits and an error before the maroon and gold retired the side, going up 4-0.

The hosts outscored the Warhawks the rest of the game, 5-2, but it wasn’t enough to overcome the faults of the first inning, losing the opener, 6-5. Still, the way the final 8.5 innings played out gave Texas State some confidence.

“We ran up against some tough luck there in the first inning, got behind the eight ball early. But man, I was super proud of our guys, they came back and competed,” assistant coach Chad Massengale said Friday. “So we’re still in a good position to win a series. I’m looking forward to tomorrow.”

The Bobcats went on to win Saturday, 6-5, and Sunday, 4-1, to claim their first series win of the year.

“It says a lot because every day, our guys are working really hard and we’re just going out there to compete,” junior shortstop Dalton Shuffield said. “And I mean, it kind of shows a lot of toughness with our team. Some of the guys, their bodies are aching and stuff, but we’re just coming out and we’re giving it our all every game and it kind of worked out this weekend.”

Things seemed bleak for Texas State again on Saturday. The hosts scored a run in each of the first three innings, but ULM (10-10, 3-3 Sun Belt) countered with a three-run homer in the top of the second. The Warhawks pulled ahead in eighth with a two-RBI single to make it 5-3.

But in the bottom of the ninth, sophomore left fielder Jose Gonzalez was hit by a pitch to get on base and sophomore right fielder Peyton Lewis launched a home run to tie the game up and send it into extra innings.

Junior right-handed pitcher Tristan Stivors (1-1) kept the visitors off the bases in the top of the 10th. Junior pinch hitter Cameron Gibbons led off the next frame with a single to left centerfield and Will Hollis followed it up with a walk-off double down the right field line to earn the 6-5 victory.

“I was pretty relaxed up there,” Lewis said. “I was just trying to keep calm, keep my composure and do what I do.”

“It was huge to gain back momentum after kind of a tough Friday night, a few things didn’t go our way,” Hollis said. “For us to come out here and battle again today and ultimately come from behind with a really big win is huge for us going forward. So we’re looking forward to tomorrow. We know we gotta come out and compete again.”

Senior RHP Garrett Herrmann had one of his career-best performances in the series finale Sunday. Herrmann, normally a midweek starter who has worked his way in the weekend rotation, tossed seven complete innings, striking out seven and allowing just one run.

The Bobcats tied the game at 1-1 on an RBI fielder’s choice from senior first baseman Cole Coffey that scored Bonner. Big swings from Shuffield in the seventh and junior third baseman Justin Thompson in the eighth both cleared the fences for three runs, giving Texas State the series-clinching 4-1 win. Herrmann improved to 3-0 on the year and Stivors picked up his third save.

“I was just fired up. I’ve thrown in some big games, here this is actually my first weekend win for Texas State,” Herrmann said. “So I was excited to get that opportunity and no better time than to get our first series win, as well, as a team.”

“I think we’re heading in the right direction, I feel like,” Trout said. “I feel like we’re continuing to play good defense, we’re continuing to pitch the ball, we’re getting better in the running game, offensively, our approaches are getting better and we’re starting to see success. And the one thing I told the guys, we’re starting to catch some breaks, too. You know, our motto is, ‘If you continue to work, you continue to play hard, you put the time in, it’s gonna go in your favor at some point in time.’”