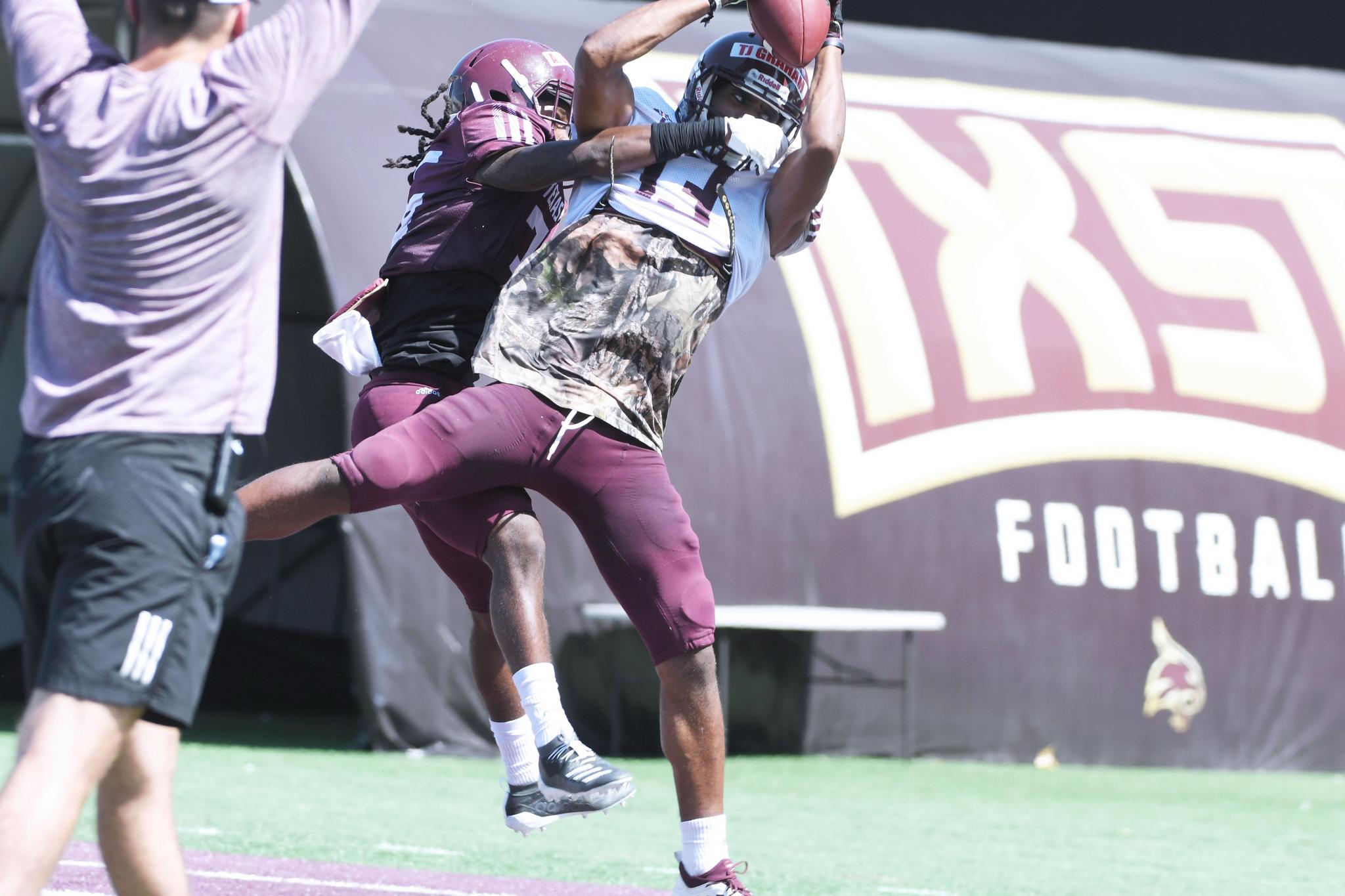 Texas State looks to bounce back against Wyoming

One week into the season, Texas State (0-1) is still without a starting quarterback.

Sophomore Tyler Vitt was the starter during the 41-7 loss to No. 11 Texas A&M (1-0) in the Bobcats’ season opener last Thursday, but was pulled with three minutes left in the second quarter in favor of junior Gresch Jensen after throwing two interceptions. Jensen didn’t fare any better, throwing two picks of his own.

The team is still exploring which player is their best option as it heads into Saturday’s game against Wyoming (1-0). Head coach Jake Spavital rotated both players with the starting unit in practice this week. Neither quarterback earned the job as of Thursday.

It might take Texas State’s second game of the season for the coaching staff to make a decision.

“I think based on the performance, they’re pretty even,” Spavital said. “And it’s really a flip of a coin between those two if you kind of look at it. So I think you’re going to see them both get some pretty good action and see where it goes from there. Just see who’s going to be the guy that’s going to lead this team and find ways to put the ball in the end zone.”

A better run game could help the situation this week. The Bobcats’ running backs gained just 18 yards on 11 carries. Spavital and offensive coordinator Bob Stitt chose to stop running the ball altogether in the second quarter.

The Aggies aren’t easy to run against for any team, though. Texas A&M was the No. 2 rushing defense in the NCAA in 2018, allowing 92 yards per game. Spavital said Josh Henson, Texas A&M’s offensive line coach, told him even the Aggies’ offense struggles to run the ball in practice against the team’s defensive line.

Wyoming isn’t much worse, though. The Cowboys ranked 26th in rushing defense last year and held Missouri’s running backs to 3.0 yards per carry in a 37-31 victory Saturday to start the season. Stitt said the offense has to shape up on the mental side of the game to run the ball well, including at quarterback.

“When you’re running into a seven man box against a team like (Texas A&M), you’re not going to have much success running. And that wasn’t the game plan to do that,” Stitt said. “I think we got a chance, got a handle on how we may be able to take advantage of some certain formations and some runs (against Wyoming), but we gotta be smarter at quarterback when we do hand the ball off.”

If Texas State can move the ball more consistently, the defense should be better situated to rack up more stops. The Bobcats played most of last week’s game with their backs against the wall; the Aggies’ average starting field position was their own 44-yard line. The short field didn’t leave the maroon and gold much margin for error.

But the defense didn’t take advantage even when they did have breathing room. Texas State’s offense crossed the 50-yard line for the first time late in the third quarter, then punted to Texas A&M’s 6-yard line on fourth down. Aggies freshman running back Isaiah Spiller took a carry for seven yards on first down, then broke free for an 85-yard run the next play. The hosts punctuated the drive with a 1-yard touchdown pass.

“We had some good stops down there at times, but you just gotta keep stepping it up and keep executing,” defensive coordinator Zac Spavital said. “Defensively, you just gotta go out there and play. You know, things happen in games, some games are different than others. And we just gotta know when they get into the plus-40 area, we need field goals or turnovers.”

Jake Spavital called Wyoming’s run-first offense “the definition of efficiency.” The Cowboys gained 297 yards rushing against the Tigers, and while redshirt freshman quarterback Sean Chambers only threw for 92 yards, he also didn’t commit any turnovers.

“They like to give the ball to their quarterback and have him run down hill,” senior outside linebacker Frankie Griffin said. “So we just gotta stop him and make them get out of their element, start passing the ball.”

Mizzou turned the ball over three times — two fumbles and one interception — ultimately costing the Tigers the game as Wyoming scored 17 points combined on the three ensuing drives. Missouri quarterback Kelly Bryant had success throwing the ball against the Cowboys, registering 423 passing yards and two touchdowns. Texas State will need to do the same for a chance to win the game.

But first, the Bobcats will need to know who’s throwing the ball.

Texas State will host Wyoming inside Bobcat Stadium on Saturday at 6 p.m. Jake Spavital said the team is fired up to play in front of a home crowd and show they’ve learned from their mistakes against Texas A&M.

“We have a good game plan going into Wyoming. We know we’re capable of,” senior wide receiver Hutch White said. “You know, last week wasn’t our best showing. So we know what we can do and we’ll definitely put that on display this Saturday.”