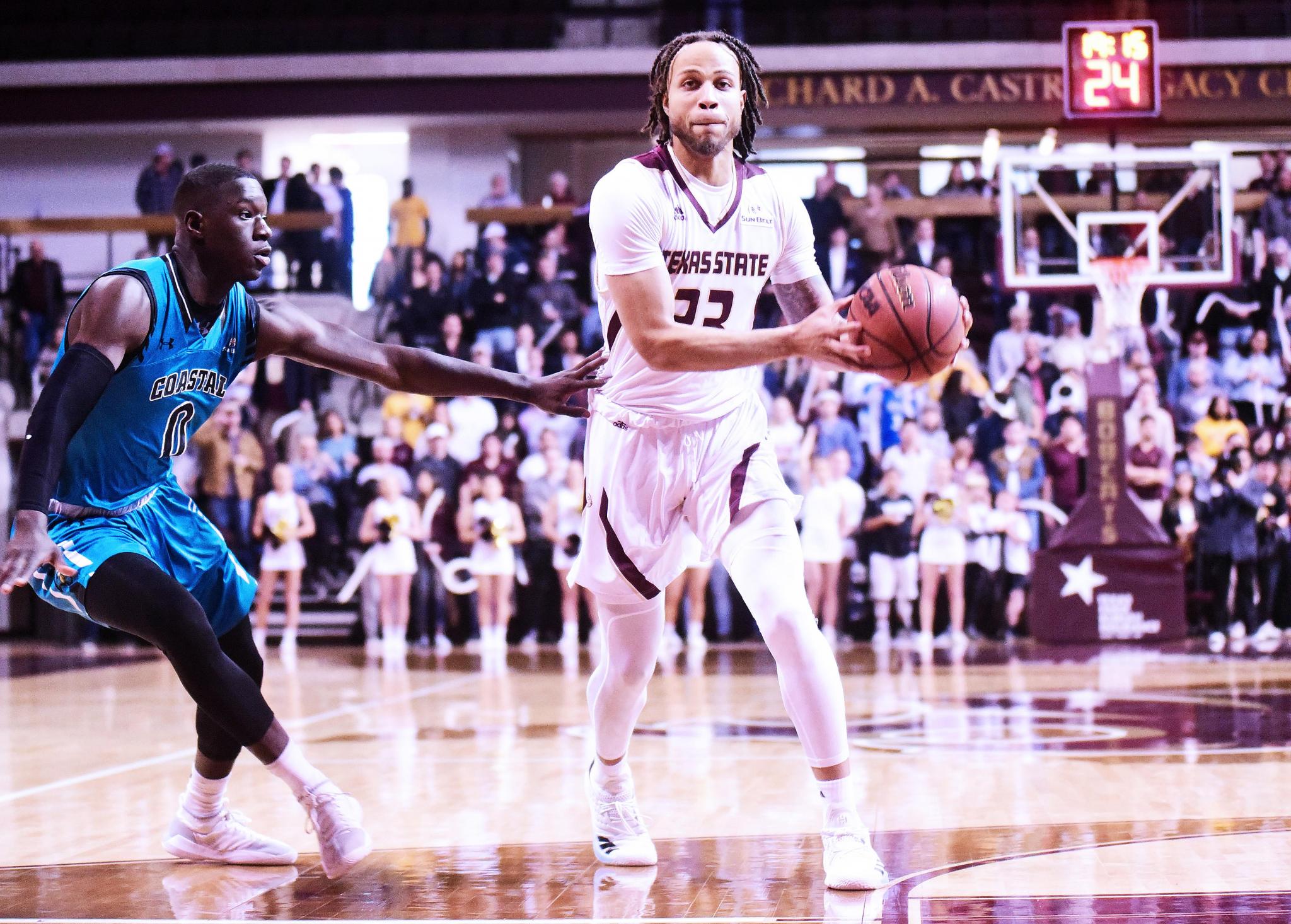 The Bobcats were rewarded for it with a 38-23 lead at halftime over Coastal Carolina on Saturday.

The second half, however, was less than stellar. Texas State committed 13 turnovers, the offense stalled and the Bobcats were outscored, 34-27.

But Texas State held on for a 65-57 win over the Chanticleers in front of the fifth-largest crowd (4,583) in Strahan Arena history.

“I thought our first half was an excellent first half,” said head coach Danny Kaspar, who secured his 93rd win at Texas State on Saturday. “I thought our second half was, I was disappointed with the way we came out. You know, I did not like the way some of our players performed in the second half. I knew (the Chanticleers) were going to pick it up. I knew we were going to see a lot of traps and presses.”

But Coastal Carolina’s defense tightened in the second half. The Chanticleers did exactly as Kaspar expected. Texas State constantly faced backcourt pressure. But it was the Bobcats' own carelessness with the ball that hurt them. Coastal Carolina cashed in on its opponents’ mistakes, scoring 15 points off turnovers in the second period.

“It just kind of got careless in the second half,” senior forward Alex Peacock said. “Like I said, we came out flat. You know and then we had a couple turnovers off the press and kind of silly turnover stuff that let them get back in the game. That’s kind of the major part.”

The Chanticleers began the second half on an 8-0 run to get to within 38-31. Texas State redshirt freshman Alonzo Sule ended Coastal’s quick start with an emphatic slam dunk.

The Bobcats extended their lead back to double digits with a 3-pointer from Peacock and back-to-back buckets from junior guard Nijal Pearson.

The Chanticleers, however, responded with a 13-2 run late in the period and cut the Bobcat advantage down to three points. But Texas State closed out the game with four made free throws from senior guard Tre Nottingham and Pearson to secure the win.

Saturday’s victory keeps the Bobcats tied for first place in the conference with UT Arlington (12-12, 8-3).

“This is a big win because we know, like, we knew at halftime UTA beat App State by 10 and we’ve got to stay on top with them,” Peacock said. “It’s a big win for us. It went up and down but we got the win.”

With Texas State tied atop the Sun Belt, Kaspar wants his guys to avoid looking too far ahead.

“There are some guys, they want to collect the trophy before they finish the race,” Kaspar said. “Finish the race first then we’ll give you the ribbon or the trophy. That’s my common line to them. And you finish the race when we’re sitting on top of the podium in New Orleans headed to the NCAA tournament or we’re here or we’re at somewhere cutting down the nets because we’ve clinched the conference title.”

The Bobcats continue their quest for a Sun Belt championship on the road against Arkansas State (10-14, 4-7) inside First National Bank Arena in Jonesboro, Ark. on Thursday at 7 p.m.

Now that Texas State is back in first place, the Bobcats have no plans on allowing the hype to trip them again.

“We understand that no matter if a team is 4-4 or 3-5, whatever the case is, every team is coming for the top spot,” Nottingham said. “Every team is going to come out here and compete. So, it’s not too hard to look at one game at a time. But, I ain’t going to lie, sometimes we do peak a little. We get a little head high and look at the NCAA brackets but we don’t let it get to us. We still understand we got to lock in and take care of conference first before we think about that.”