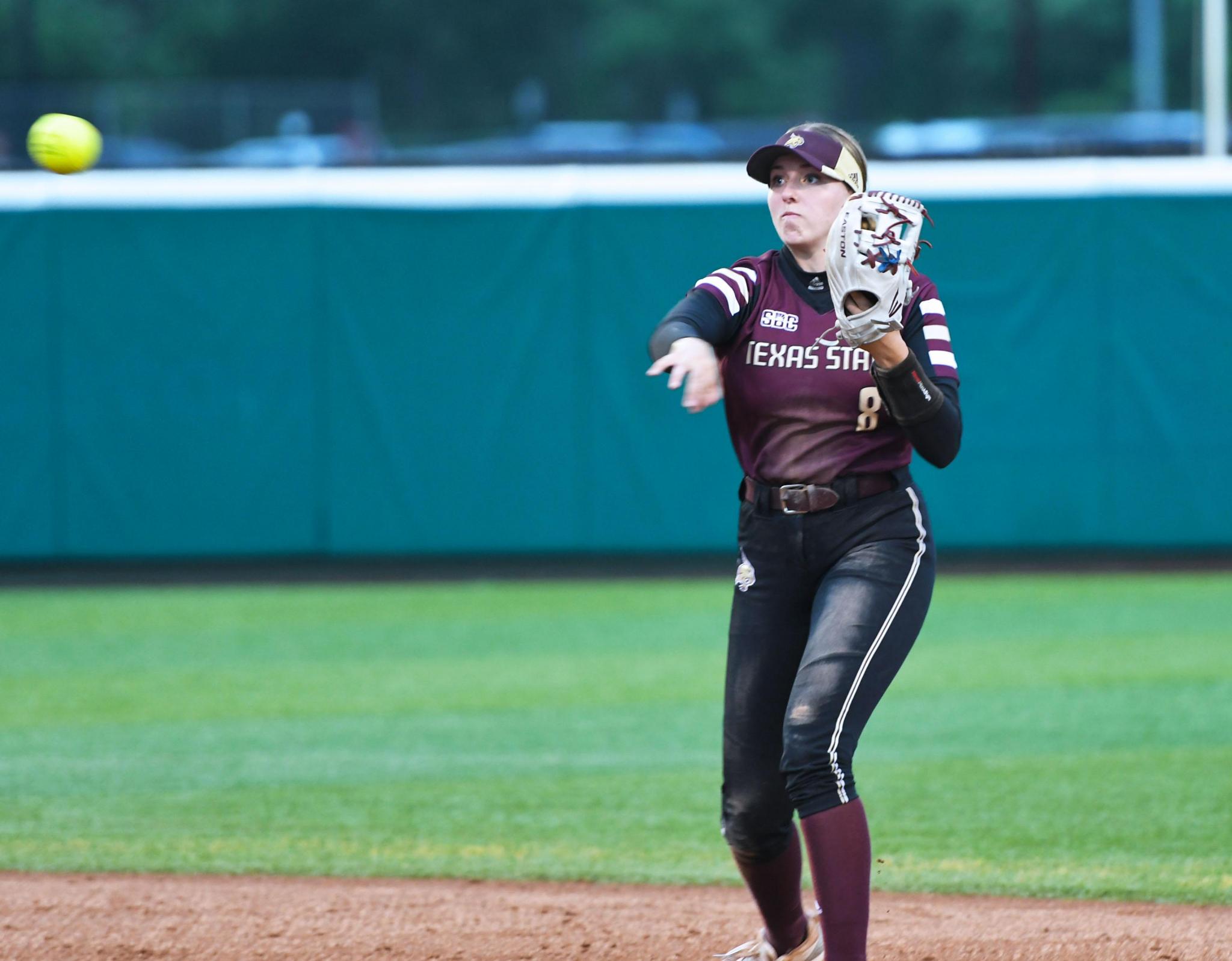 Texas State Softball is finding its stride as the team defeated I-35 rival UTSA in run-rule fashion at Bobcat Softball Stadium Tuesday afternoon, 8-0. The victory made it five in a row for the maroon and gold — their longest streak of the season — and is their second run-ruling during the stretch.

Head coach Ricci Woodard said her team is playing really well right now and wants her team to use these games as a boost for the “May Push.”

“The goal is to be playing your best ball in May,'' Woodard said. “If we can kind of take April and run with it and put ourselves in a great spot for the middle of May, that's what we want to do.”

Junior third baseman Sarah Vanderford duplicated her performance on Saturday by opening the scoring up for the Bobcats with another home run deep to right centerfield. She now has four hits in her last three games but it hasn't been physical changes leading to her success — it’s been more mental.

“I think getting back out here every day and working with Coach Woodard and just having more talks about the mental side of things helps,” Vanderford said. “Also understanding that I still have a reason to be confident and I still need to know that I didn't forget how to hit.”

Vanderford hasn’t forgotten how to hit. She has home runs in consecutive games now and is just five away from matching her 12 homers from last season. Sophomore leadoff hitter Hannah Earls added a walk to her stat sheet that scored a run and gave the Bobcats a 2-0 lead in the bottom of the second. Freshman outfielder Ciara Trahan singled hard to left field for one more run.

The offense for the hosts caught fire in the fourth with a couple of hits to get the bases loaded. A wild pitch awarded Texas State with a run and advanced runners to second and third base. Senior catcher Caitlyn Rodgers cleared the bases with a three-run homer that ultimately ended the game 8-0 against UTSA (14-25, 7-7 Conference USA).

“She’s just been trying to change her mindset to be more aggressive,” Woodard said. “If you’re the pinch hitter, you better be aggressive because they're going to try to come at you. When she swung at that first pitch, I was like ‘OK, she's right on target right here.’ To hit it opposite field the way she did the left field line means she got it all. That’s a great at-bat for her.”

Texas State (25-17, 10-8 Sun Belt) continues its two-game non-conference slate against Incarnate Word (13-26, 3-6 Southland) on Wednesday at 5 p.m inside Bobcat Softball Stadium as it looks for win No. 6 in a row. The team returns to conference play this weekend on the road with a three-game series against Georgia Southern (9-24, 4-11).