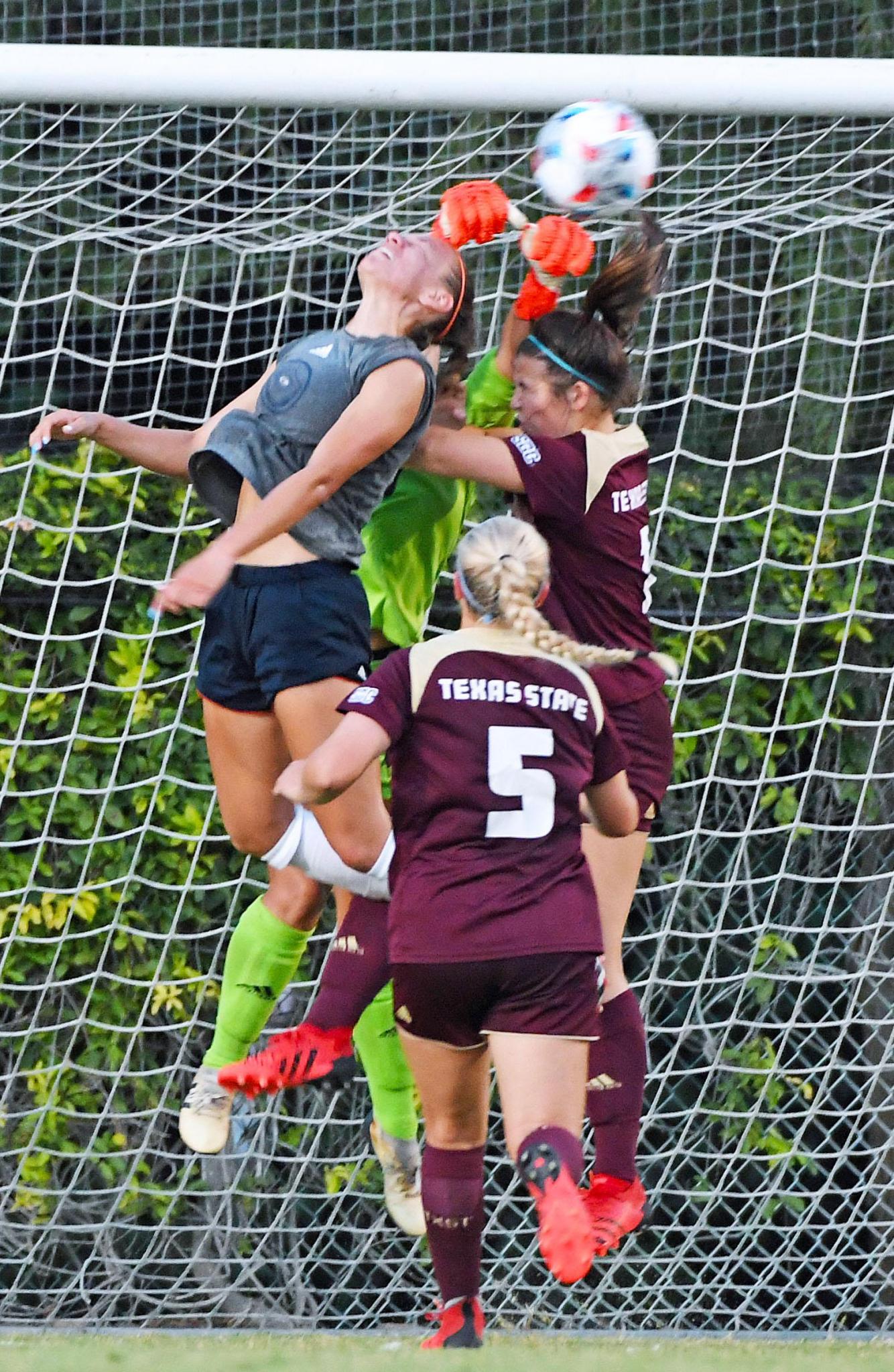 The Bobcats (1-0-1) allowed their opponents to score the first goal in each game but came back both times to stay unbeaten.

“We’re trying to teach them that, ‘Yeah, we want to win for the points in the conference. But a loss gets you no points,’” head coach Kat Conner said after Sunday’s match. “So to fight back to get a tie, that’s really important to get that point.”

Cardinals sophomore forward Sierra Wannamaker got UIW on the board quickly in Friday’s match, scoring from just outside the 18-yard box a little over three minutes into the first half. Texas State outshot the hosts the rest of the half, 9-4, but could get any past the keeper.

The maroon and gold kept the pressure going in the second half. In the 71st minute, sophomore forward Olivia Wright had a shot on goal that was rejected by UIW’s goalie but the ball bounced to junior forward Madison Humphrey, who tapped it in to tie the score at 1-1.

Sixteen minutes later, junior midfielder Kiara Gonzales sent a cross to sophomore midfielder Trinity Clark in the middle of the box. Clark placed the ball in the bottom right corner of the net, putting the Bobcats ahead, 2-1. The visitors hung on to the lead in the final 13 minutes to take the victory in the season opener.

Wright and Gonzales were both credited with assists in the match. Sophomore goalkeeper Beth Agee came up with six saves.

Texas State got off to another sluggish start against the Panthers. Neither team scored in the first half, frustrating Conner.

The team did better job in the second half, taking 12 shots and only allowing one. The one proved costly, though, as PVAMU got into the box on a counterattack and scored the first goal of the game with just 13:29 left on the clock.

The Bobcats retaliated nine minutes later. Junior midfielder Bailey Peschel crossed the ball in from the left side to Gonzales, who headed it toward far post. Sophomore midfielder Mya Ulloa found it and knocked the equalizer in for her first career goal. Neither team was able to score in the final 4:13 or in either of the two overtime periods, resulting in the 1-1 tie.

“I’m still proud of them, though, because obviously, we fought,” Conner said. “

I thought Mya had a great game today. She spun a couple times, she found herself in. With our attackers, I think they just need to be a little bit more confident in themselves to say ‘You know what? I’ve found myself in, now I’ve gotta push this into the backside of the goal and do it with confidence.’”

The Bobcats will travel to Nacogdoches on Sunday to take on Stephen F. Austin (0-2) at 1 p.m.