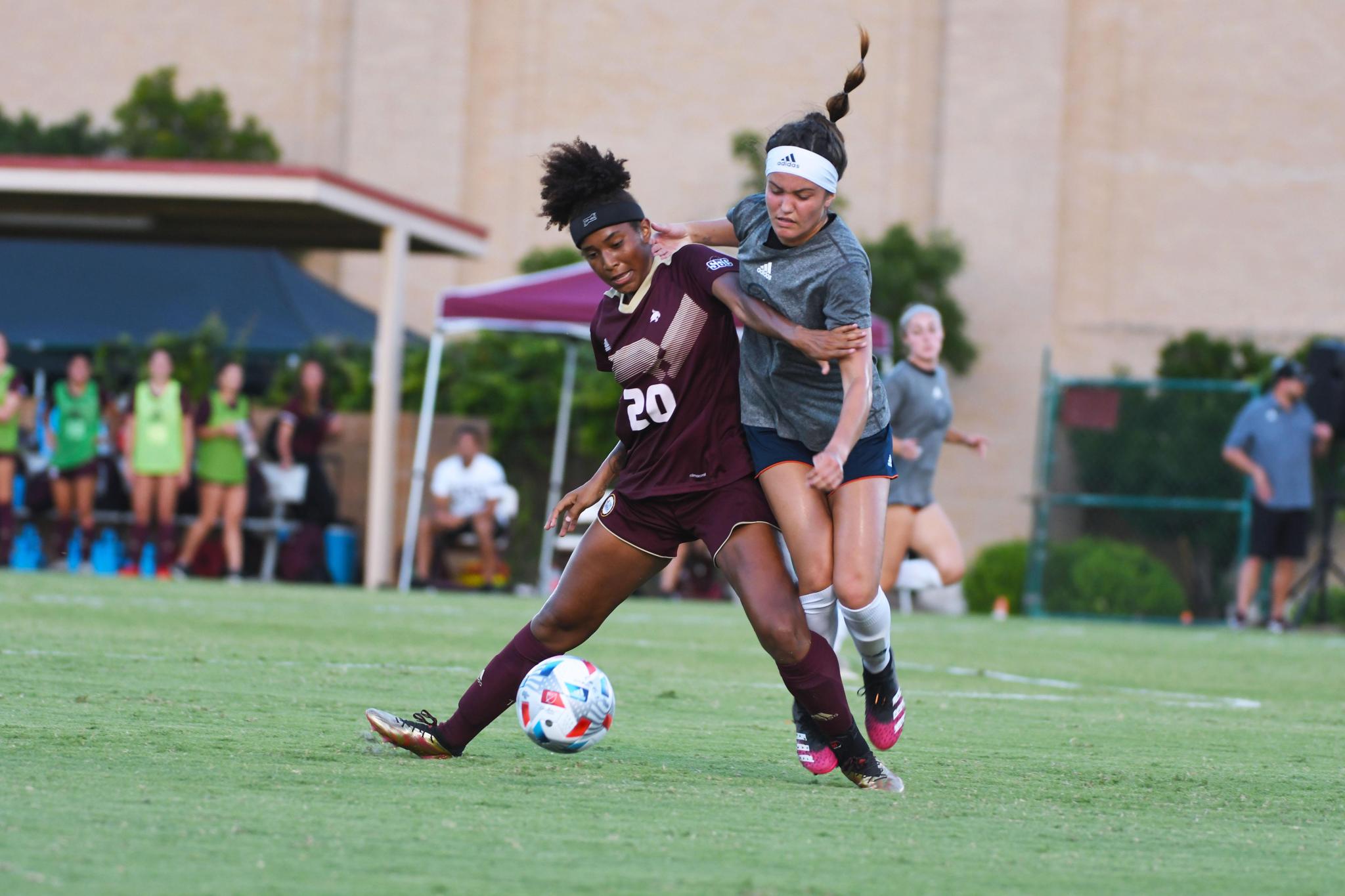 Texas State Soccer hoping to learn from adversity in 2021

UTSA caught the Bobcats off guard.

The Roadrunners traditionally line up in a 4-3-3 formation, and Texas State head coach Kat Conner didn’t expect any different when the maroon and gold hosted them in an exhibition Thursday night inside Bobcat Soccer Complex.

But instead, UTSA dropped one of its forwards back and pushed one of its defenders up to the midfield to play in a 3-5-2, something Conner said she’s only seen the team do a handful of times and a scheme she didn’t prepare her players for.

“We really hadn't worked on that type of style yet,” Conner said. “We were still trying to kind of gain our possession and get in a rhythm with each other. That one just is a little bit more of a direct style that we needed to play.”

The Roadrunners dominated possession in the first half as Texas State slowly made adjustments. The Bobcats’ defense held strong, keeping the ball out of the net, but the offense struggled to generate chances. By halftime, the visitors led the hosts 9-1 in shot attempts.

But as the match wore on in the second half, the maroon and gold became wiser to the formation. The team still held its own on defense but also got forward more often. For instance, junior forward Madison Humphrey sent the ball upfield from the right side with just under 18 minutes left on the clock, hoping Texas State would take advantage of a three-on-two opportunity. Junior forward Kiara Gonzales received the pass, got into the box and slipped a shot past the goalkeeper, but the ball went wide right.

UTSA outshot the Bobcats in the second half, 7-4, and the scrimmage ended in a 0-0 draw. But Conner was impressed by the way they handled the challenge. She's hoping the team can improve at facing adversity even more.

“I'm proud of them because that's the key, right?” Conner said. “Is that they gotta look at it together and they gotta solve it together.”

Texas State fought through a rough 2020, going 4-12-1 overall and 4-4-0 in Sun Belt play. Five of its matches went into overtime, including a 1-0 loss in the first round of the conference tournament against Troy on Nov. 2 — a match in which the Bobcats had more than triple the shots of the Trojans.

The team graduated seven seniors and saw freshman midfielder Emma Jones, who made 10 starts and scored two goals, transfer to Louisiana Tech. But the roster still has plenty of pieces that Conner is excited about.

Sophomore goalkeeper Beth Agee still holds down the fort in front of the net after saving 87 balls and rejecting 75% of the shots on goal sent her way last year. She’s joined by freshman goalie Katelyn Chrisman, who played the second half of Tuesday’s exhibition and sustained the clean sheet with three diving saves.

The backline figures to be the most experienced group on the team. Senior defenders Gabie Jones and Addison Gaetano played the most minutes among the Bobcats’ field players in 2020. Juniors Avery Thies and Kamaria Williams each have 15 starts under their belts. Freshman Mackenzie Myers will also be in the mix for playing time.

The midfield will feature both familiar faces and players that have waited on their shot. Gonzales will look to build on a solid sophomore year in which she scored two goals — the most of any returner. Junior Bailey Peschel has found the back of the net in each of the past two seasons. Sophomore Alana Clark started all but two of the games she played in and her twin sister, Trinity, should crack the first 11 now as well.

Conner said she’s looking for more composure from her forwards in front of the goal this season and has a few options to try out. Sophomore Olivia Wright should get a lot more minutes after impressing as a rotational player buried on the depth chart by a pack of seniors last year. Humphrey looked promising as a freshman but struggled to regain her confidence in 2020 after a knee injury that limited her to two games — the head coach thinks that will change this season. Senior Ally Kewish is listed as a midfielder but surprised her coaches in practice by how well she played when they sent her up the pitch. And freshmen Zoe Junior and Abigail Miller both got playing time during Tuesday’s scrimmage.

Texas State begins the 2021 season on the road at Incarnate Word on Aug. 20 at 7:30 p.m. Conner is excited to see how the team works through issues they encounter on the field.

“We learned from COVID last year — it's like, ‘You know what? Life is messy, but how are we going to, not just manage, but rise to the challenge?’” Conner said. “So that's kind of our motto to them, is just that we want to rise to the challenge. We don't want to just get by, we want to rise. And so that's something we're just trying to get them to do and to communicate and solve things together.”