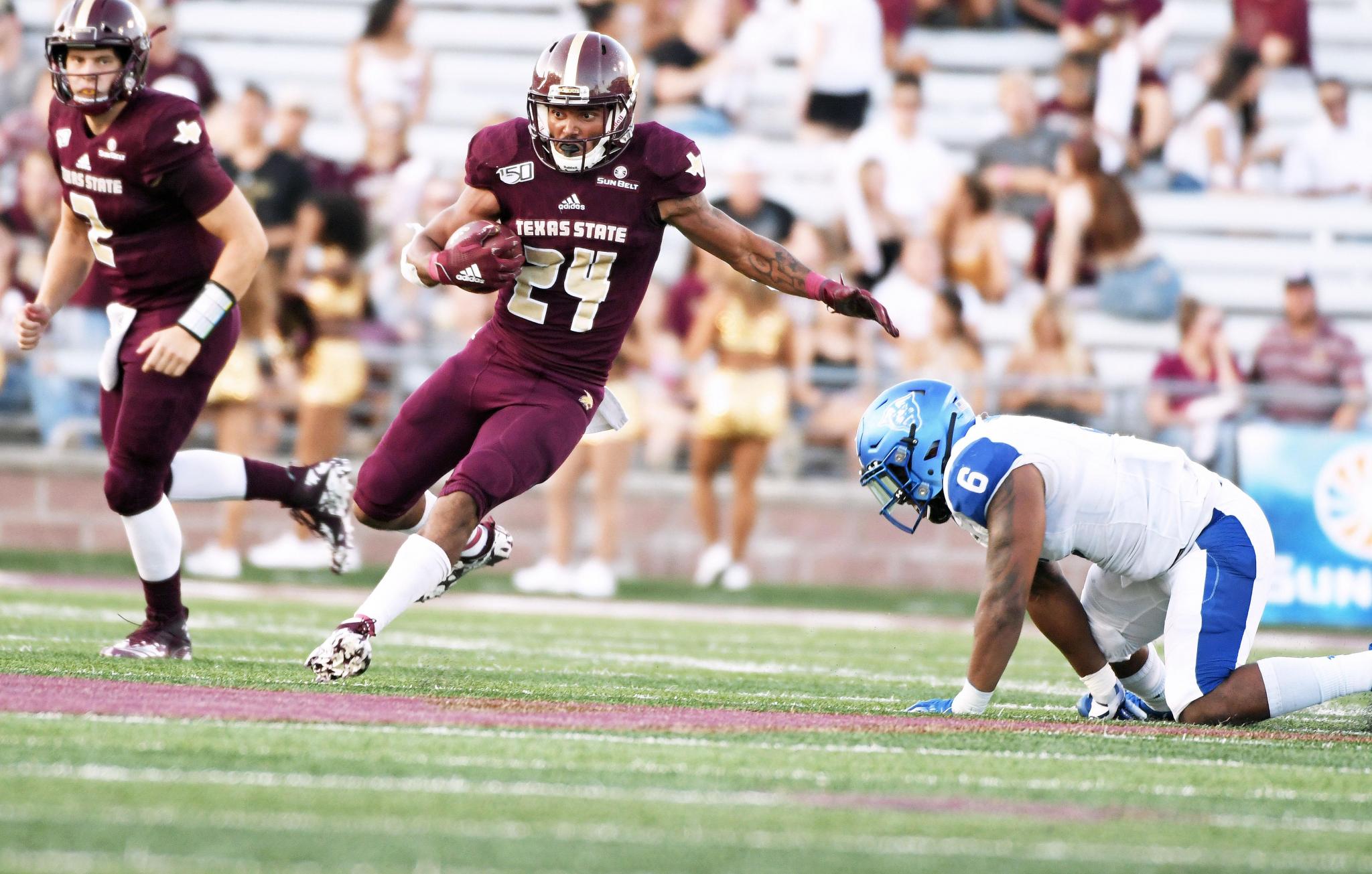 Ish Davis stood up after tackling Destin Coates at the maroon and gold 3-yard line on first down. He took eight steps up the field flexing as the final 15 seconds of the clock began to count down. Junior defensive lineman Caeveon Patton trailed close behind. He gave Davis a love tap on the right shoulder, then a low-five at the five-second mark.

As their hands made contact, Davis saw Georgia State lining back up for another play. Davis bolted back to the line of scrimmage, hurdling Panthers 6-foot-3 redshirt junior left guard Shamarious Gilmore to get back on his side of the ball. Patton followed suit, rotating around redshirt freshman right tackle Travis Glover to get back on the edge.

Georgia State senior quarterback Dan Ellington received the snap with one second left and immediately chunked it into the turf. The Bobcat Stadium scoreboard read all zeroes on the clock, with the hosts ahead, 27-24.

Senior linebacker Bryan London II took off his helmet. Senior safety JaShon Waddy raised his right fist. Senior linebacker Nik Daniels absconded toward Texas State’s side of the field, colliding with a huddled mass of gleeful players and coaches. The team had won its first game of the season.

Referee Jeremy Parker raised both his hands, indicating the Bobcats needed to remain on their sideline. After review of the play, the officials ruled Ellington’s spike reached the ground before time ran out. Georgia State redshirt senior Brandon Wright connected on a 20-yard field goal in the final second of regulation, sending the game into overtime at 27-27.

“It's pretty emotional because everybody rushed the field because we all thought we had won the game,” head coach Jake Spavital said. “So hopefully, you'll probably never see one of those situations running ever again. Of course, it comes in my fourth game as a head coach.”

The Panthers held the Bobcats behind the first-down marker for three plays, bringing up 4th and 6 on the 21-yard line. Junior quarterback Gresch Jensen targeted senior wideout Hutch White near the right sideline of the end zone. White wasn’t able to reel in the throw, but a Georgia State defensive back was flagged for pass interference, setting up Texas State with a new set of downs on the 6-yard line.

Junior running back Caleb Twyford, who finished the night with 139 yards on 27 carries, came within inches of the goal line on first down. Jensen punched it in on the next play to tie the game again at 34-34.

“We were all really hungry for this game,” Twyford said. “The first three games may not have went as planned. But for this game, we all decided we're going to straighten our heads up, come out, play as hard as we could give it our all and just go hard.”

The team’s offense wasn’t as fruitful in double overtime, as senior kicker Joshua Rowland missed a 43-yard field goal, leaving the Panthers one score away from sealing the game. The Bobcats knocked Georgia State back 3 yards on first down and Ellington’s pass fell incomplete the next play.

The maroon and gold defense held firm again on the next drive as another attempt from Wright from 36 yards out sailed wide right.

“The toughest part (in overtime) is really controlling your emotions,” London said. “Because it's like, on defense normally when you get off, you just chill. But you're so invested in the offense (in overtime) and want to see them do good. And just like, your nerves are all over the place. That's probably the toughest part.”

Twyford ran on first and second down, gaining seven yards. Jensen’s pass on third down fell incomplete. Rowland took to the field again aiming for a 35-yard game-winner. The visitors called timeout to try to ice the kicker.

“The ice came and it honestly gave me more time to calm down and just go out there do my job, do my swing. And I trusted a snap from (senior long snapper) Justin (Warner) and great from (senior receiver) Mason (Hays) and my whole O-line just blocking their tails off.”

Rowland’s fourth field goal attempt of the night flew between the uprights to secure a 37-34 Texas State victory. The Bobcats stormed the field again, confident in the outcome. The players picked up both Spavital and Rowland on their shoulders in the team locker room after the game.

Texas State hosts Nicholls State (2-1, 1-0 Southland) inside Bobcat Stadium on Saturday, Sept. 28 at 6 p.m. But first, Spavital is ready to enjoy his first win of head coaching career — at least for a night.

“I couldn't be more happy for those kids,” Spavital said. “That's a big win for us. You know, we're going to enjoy this one tonight. We know we've got a really tough Nicholls State coming in next week where our goal is — if the new season starts now, our goal is to be 2-0 after next week.”

Spavital called it the most complimentary game of football the team has played all season.