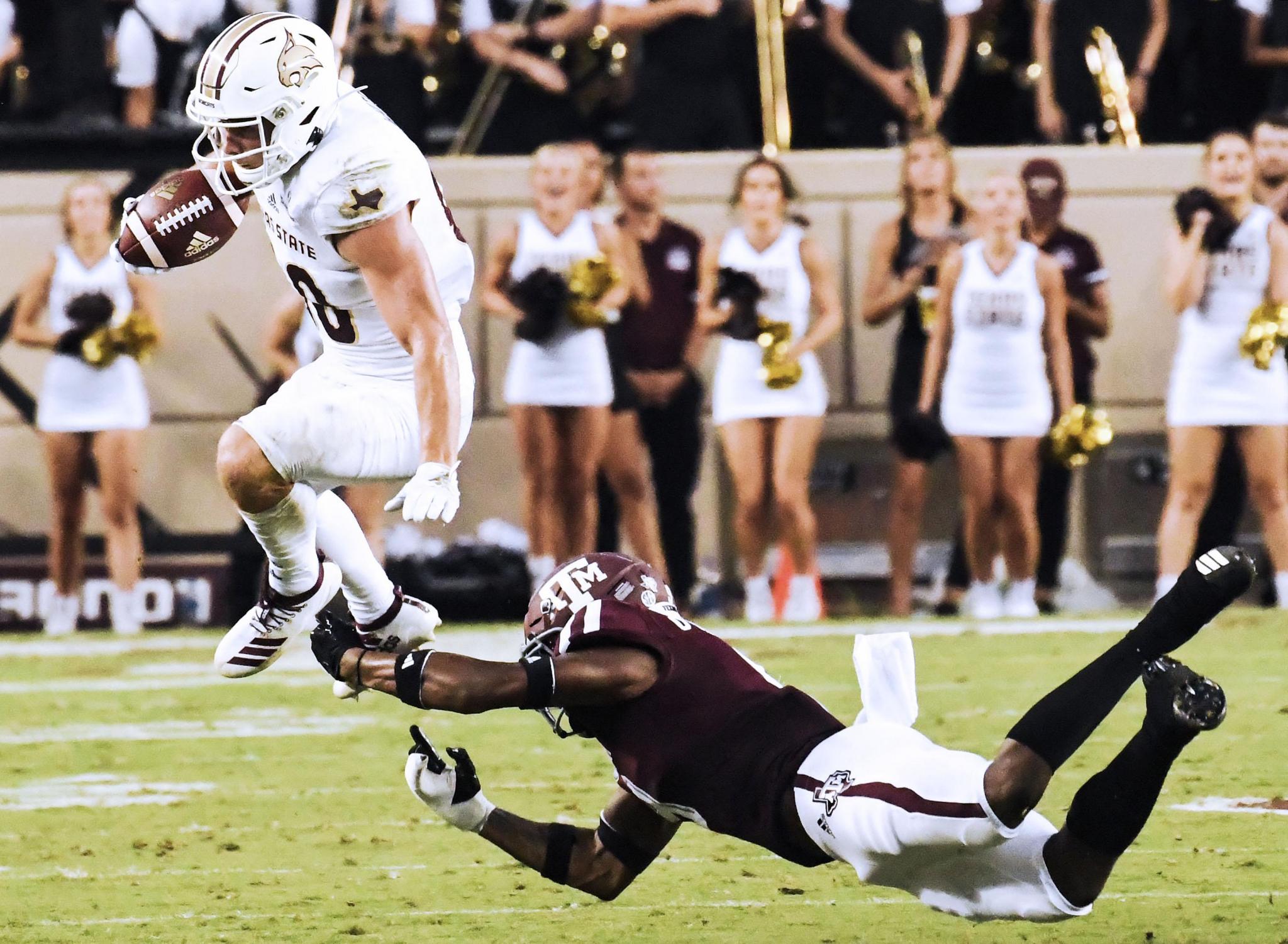 Tyler Vitt seemed like he got things going halfway through the second quarter of Texas State’s game against No. 12 Texas A&M in College Station on Thursday. The sophomore quarterback chucked the ball to his left, finding senior wide receiver Hutch White for a 13-yard gain and a first down. He hit White again three plays later on 3rd and 8 for another 10 yards, reaching the 50-yard line for the first time all game.

The Bobcats wouldn’t get an inch more.

Vitt missed on a throw to senior receiver Mason Hays on the next play. He took a shot downfield on second down, but junior wideout Jeremiah Haydel couldn’t come up with the catch. Vitt’s next throw was intended for junior running back Caleb Twyford, but Texas A&M junior defensive back Myles Jones jumped the route, snared the interception and charged 14 yards in the opposite direction.

It was one of four picks by the Aggies. Texas A&M’s average starting field position for the game was its own 44-yard line. Texas State entered into the host’s territory twice all game and fell in the 2019 season opener, 41-7.

“We've still got a long ways to go, offensively. We're still trying to figure out our quarterback situation, but I think a lot of the mistakes that happened were self-inflicted, which is something that we gotta just keep correcting,” head coach Jake Spavital said. “You look at the keys to victory that we talk to these kids about all the time is the yards per play, which we weren't very good on offense, you look at the turnovers, we had four turnovers. You know, that's tough to overcome.”

Spavital knew he wanted to get junior quarterback Gresch Jensen into the game at some point during the second quarter, at least for one series. The time seemed as good as any after Vitt’s interception — his second of the night.

The Aggies scored a touchdown to go up 28-0 and Jensen made his debut for the maroon and gold with 3:05 remaining in the half at the Bobcats’ 25. It didn’t take long for him to make the same mistake as Vitt. Jensen’s second throw was intercepted by senior defensive back Roney Elam, who ran it back to the 25-yard line.

Texas State had to keep throwing, though. The run game was almost non-existent. The team’s offensive line got no push and left little room for the running backs to move. Twyford and senior tailback Anthony D. Taylor combined for 18 yards on 11 carries, a 1.6-yard average.

“They were giving us favorable boxes to run the ball into, they're giving us four-man boxes at times, and we were getting shut down,” Spavital said. “So that's something that, talking with our O-line coach, that we're going to increase and we've got to get better. We gotta be able to run the football and not just be one-dimensional, which you know, we pretty much axed the run game pretty much in the second quarter.”

The Bobcat defense still looked impressive, even without favorable field positioning. The unit held strong for two plays in a goal-line stand in the first quarter, stuffing Texas A&M sophomore running back Jashaun Corbin both times before he punched into the end zone on third down.

After Jensen’s first turnover, senior nickelback Anthony J. Taylor forced a fumble at the 1-yard line, which was recovered by senior linebacker Frankie Griffin to prevent the score. Senior linebacker Bryan London II also came up with a turnover in the end zone, picking off Aggies junior quarterback Kellen Mond in the third quarter — the first interception of London’s career.

“It was just reaffirming what we already kind of knew. We have players on defense who have played in games,” London said. “We still didn't execute as good as we would have wanted. But for the first game, we played solid. But definitely room for improvement, so tomorrow we're just gonna get back to work.”

It wasn’t all bad of Texas State’s offense, either. Jensen led the team on a 33-yard drive to end the first half, nearly connecting with sophomore receiver T.J. Graham on a deep throw. He targeted Graham again in the Bobcats’ last drive of the game, who caught the ball in the end zone for a 27-yard touchdown.

Vitt finished the night 9-15 for 51 yards and two interceptions. Jensen went 20-31 for 160 yards, a touchdown and two picks. White led the team with seven receptions for 60 yards, followed by Graham with 4 catches for 53 yards and Texas State’s lone score of the game.

Spavital said he kept Jensen in the rest of the game because he was “making some plays at times.” He said the Bobcats’ quarterback competition is still ongoing and wasn’t sure who would start next week. Sophomore signal caller Brady McBride, who transferred from Memphis earlier this month, is still ineligible to play with no timetable on when the NCAA will rule on his waiver status.

No matter who starts, White is confident the offense can turn things around.

“It's definitely things that can be overcome practice. I'm confident both of (Vitt and Jensen). I know they can both get the job done,” White said. “There's definitely some nerves there. I think once we calm down, we can really just play our game. And that's what we need to do.”

Spavital is optimistic, too. He’s proud of the fight his team showed. But Texas State will need to keep fighting next week, when it hosts Wyoming inside Bobcat Stadium on Sept. 7 at 6 p.m. London is confident the team still has punches to throw.