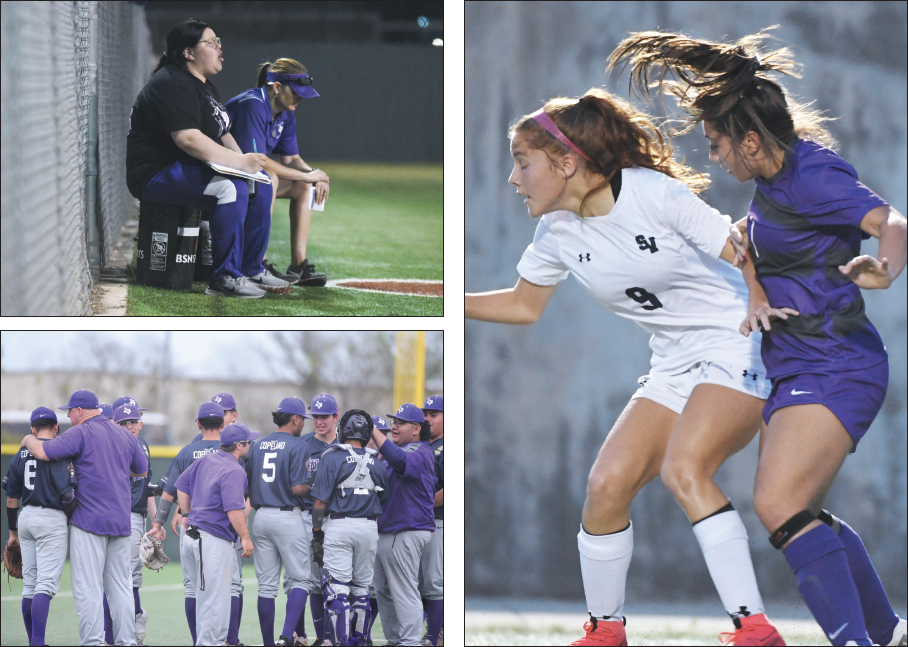 UIL suspends play; SMHS plays its final games, for now, due to COVID-19 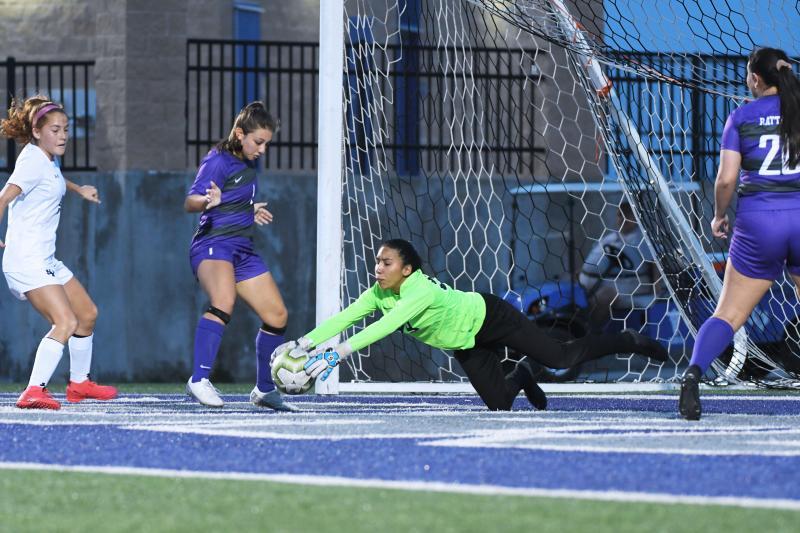 San Marcos head girls’ soccer coach Jason Carnley hustled over to a small crowd of Lady Rattler junior varsity players. The squad was watching the varsity team play in its final home game of the season against Smithson Valley from the stands behind the team bench.

“Mikaela, I need your socks,” Carnley told one of the players.

Rodriguez tossed her game-worn, long purple socks over the railing to Carnley, who handed them to senior goalkeeper Aubrey Reina. Reina rushed to the locker room to change from her long-sleeve, neon green goalie uniform to a purple and black forward’s uniform, donning No. 18.

With 15 minutes remaining in the match, Carnley was sending her in on the front line.

“It's just the fun of the game, you know, knowing that that's something she's not used to,” Carnley said. “But she killed it in the back all season long, I wanted her to get a chance to see on the other side of things and maybe she gets a chance to put one on. And she did, she got close.”

The San Marcos midfield sent a long through ball up the field. Reina blazed by her defender on the right side and was the first one to the ball inside the box.

But the senior fell before she could attempt a shot.

“I was just like ‘Just run Aubrey, just run.’ And I did and I ended up falling. But it's OK,” Reina said. “It was super fun. I was super scared at the beginning but I just wanted to have fun my last game. I don't know, I was mainly scared at first because everybody's bigger than me and I've never played forward before. But once I got into there, I just was trying to have fun. And I actually got really close to the goal, so I was pretty happy about that.”

Reina was one of nine seniors playing in her final game at San Marcos Toyota Rattler Stadium — a 4-0 loss to the Lady Rangers. The goalkeeper said she’d been through a lot of ups and downs over her career, but that it was an overall great experience.

Carnley was glad to get a final match with the Lady Rattlers.

“Our senior class has been great, it's been fantastic,” Carnley said. “I had the chance to have all of them for four years, so I watched them grow from — some of them from middle school, actually — grow all the way up and turn into good people, not just great soccer players. They're definitely going to be missed, all nine of them. It's going to be tough to replace them. But hopefully, we can fill those shoes.”

But there's a possiblity not every team gets the same closure as the Lady Rattlers.

San Marcos CISD Superintendent Michael Cardona announced Thursday afternoon that all University Interscholastic League (UIL) athletic events would be closed to the public, permitting only participants, their families and essential staff to attend as a precautionary measure over concerns surrounding the novel coronavirus (COVID-19). On Friday, the UIL announced that all sanctioned contests will be suspended, effective March 16-30.

The SMHS softball and baseball teams were in the midst of hosting tournaments. SMCISD permitted both teams to play out Friday’s games while upholding the attendance restrictions.

But both teams knew it would be their last games for a while.

“You want the girls to be able to play. It's all about them. And for us to be able to get all these teams here and play today was really important because a lot of these teams are in the same boat,” head softball coach Cathy Stoughton said. “There's a lot of people being affected by this. Scholarships, eligibility and with these guys too, you think for your seniors. You don't want them to lose their senior season, you don't want anybody to lose a season. So it's frustrating, but I mean, we've got to worry about what we can control.”

“Our school district worked with us, they gave us every opportunity to continue to get our kids better and I really appreciate it,” head baseball coach Bryan Webb said. “Like I just told these guys, this is something in life that is bigger than baseball. And you know, we've got to handle this like an adult and we've got to be able to take a little time off, maintain our bodies, heal our bodies and come back ready to go. I don't know when it's gonna be, I don't know what's gonna happen. So they just gotta stay tuned and take care of what we need to do.”

The softball team went 1-2 in Friday’s games, losing to Lindale 6-5, beating Snyder 3-0 and falling to Houston Kinkaid 4-3. The baseball team split its doubleheader, shutting out Seguin 4-0 before dropping its final game to Antonian Prep 10-2.

While the UIL will allow practices to be held at the discretion of local school districts, all San Marcos sports will be suspended through March 23 while the district goes on spring break. Stoughton and Webb said that the break will be good for the players to rest their bodies, but also encouraged them to try and stay in shape while they are away from the team. Stoughton said it’s the first time she won’t be playing or coaching softball during spring break in 29 years.

But no one knows what will happen after the shutdown. And if Friday’s games end up being the last of the school year, Carnley, Stoughton and Webb were happy they got to coach their teams one final time.

“I love this group of girls. The team chemistry that we have, from the freshmen all the way up to the seniors, has been phenomenal this year. They play together so well,” Stoughton said. “They've really been a lot of fun and I want them to be able to get back on the field, hopefully, and go through some of the successes that we know we're capable of going forward. But we'll just have to see what the plans are.”

“I'm partial to every team coming through here now because — not that I wasn't partial to the other teams — but I've seen them all grow up since, you know, Velcro ball now,” Webb said. “And, you know, I hope that that's not the case. I love these guys. And I just told them, I wake up thinking about them, I wake up thinking about baseball with them.”