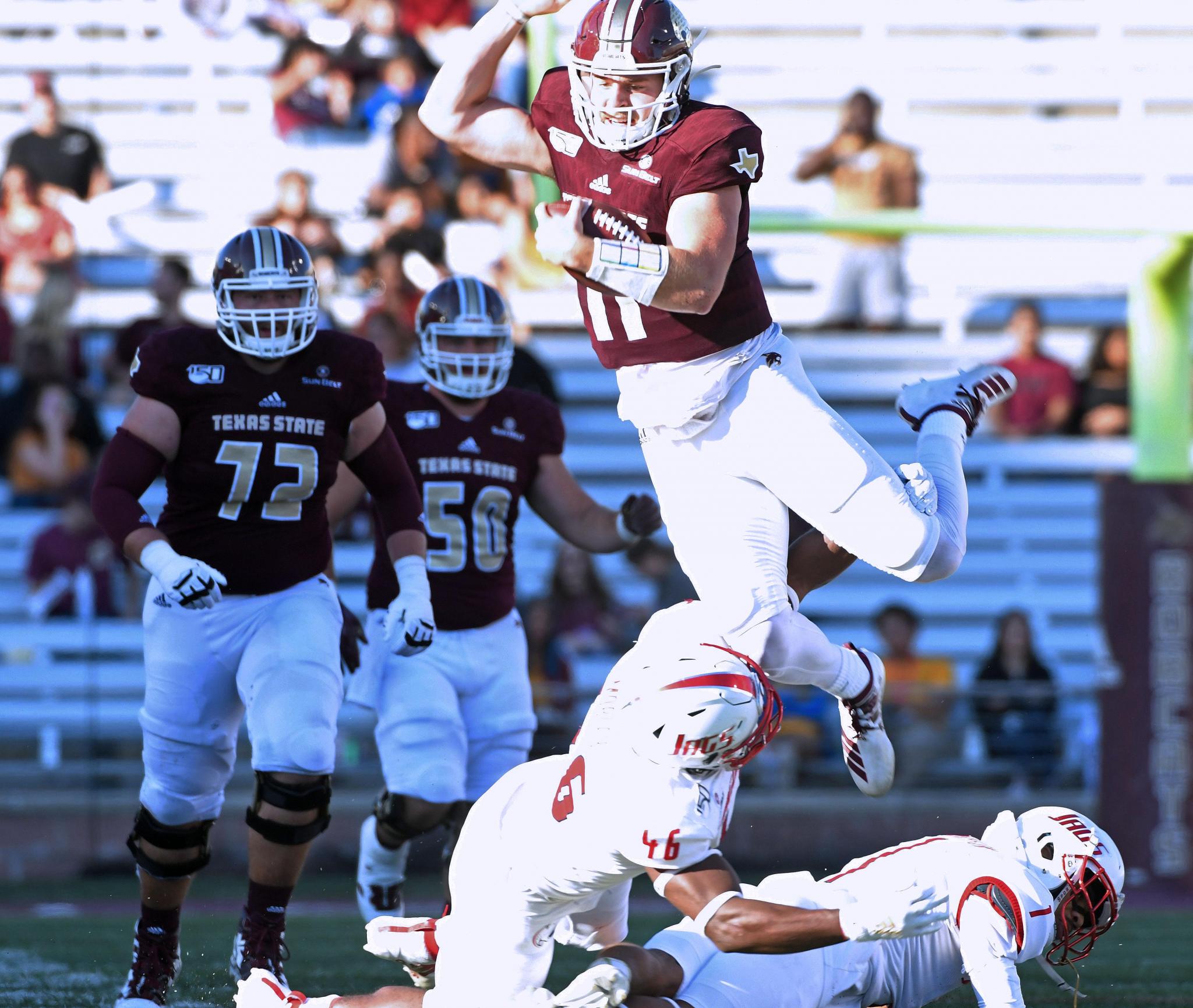 The sophomore quarterback entered the Bobcats’ ninth contest of the 2019 season with 14 games of action under his belt. For his career, he had 1,674 yards passing, 10 touchdowns and 17 interceptions on a 61.2 completion rate. He looked sharp in some games, worse in others. But they all ended the same way.

Vitt made his third consecutive start, throwing for a career-high 373 yards and matching a personal-record three passing touchdowns in a 30-28 victory over South Alabama (1-8, 0-5) — the first win of his maroon and gold career.

“These past two games, getting back into the rhythm of things has been fun,” Vitt said. “So, this third game today, I really felt in a rhythm and felt comfortable. So that was the biggest thing.”

The San Antonio MacArthur graduate got off to a sluggish start inside Bobcat Stadium. He completed four of seven passes in the first quarter for 46 yards as the Jaguars built a 7-3 lead. Texas State (3-6, 2-3) scored another field goal to begin the second period, but Vitt was intercepted on the team’s next drive, giving the visitors the ball back at their own 40-yard line.

The Bobcat defense held South Alabama to a three-and-out, though, allowing the offense to redeem itself. Anthony D. Taylor received a handoff from the 8-yard line on first down, gaining six yards. Vitt followed with a 12-yard completion to the running back for a first down. A facemask penalty kept the chains moving for the Bobcats on third down and Vitt dialed up sophomore wide receiver Javen Banks two plays later for a 40-yard touchdown two plays later, giving the hosts a 13-7 lead.

“He's a fighter. He's a blue-collar kid that shows up. He doesn't have much faze him, you know, and we put a lot on him,” Spavital said. “He was running a lot of QB draws and some kind of zone read stuff and managing the game. And he threw that one ball and went behind on the slant route and got picked but he responded back with it.”

Vitt continued chucking deep balls throughout the game, including another two scores with sophomore Trevis Graham Jr. for 38 and 17 yards, respectively. Senior slot receiver Hutch White became his favorite target, reeling in 10 catches for 165 yards — the most for a Bobcat pass-catcher in the school’s Football Bowl Subdivision (FBS) era.

Vitt and White’s connection helped extend multiple drives. Texas State, who was eighth in the conference with a 34.2 percent third-down conversion rate, went 5-11 on third downs Saturday. Three of the conversions were passes from Vitt to White.

“It's something we worked on a lot during the week, trying to get a lot of explosive plays. We were trying to work them outside of the box and then Tyler did a great job,” White said. “He's a guy who's seen a lot of ups and downs but he's someone that I love having back there. I know he's gonna give it his all every play. And I know he's just, he's a baller.”

“We have that kind of connection, I know where he's going to be,” Vitt said. “We knew with the injuries in the previous game that (White) was going to be our guy, we were going to try to get him the ball as much as we can. So he really stepped up to the plate and made some plays for us, so I'm excited for him.”

The game came down to a 28-yard field goal attempt by South Alabama sophomore kicker Frankie Onate with 1:15 left in the fourth quarter, the Jaguars trailing 30-28. Onate’s kick sailed wide left and Vitt kneeled the ball to run out the remainder of the clock for the win.

Vitt finished the game completing 23-of-33 passes and gaining a team-high 42 yards on 11 rushes. White led the team in receiving, followed by Banks with four catches for 63 yards and a touchdown.

The Bobcats will play in their final home game of the year next week, hosting Troy (4-5, 2-3) on Saturday at 2 p.m. Texas State needs one more win to achieve its best record since the 2014 season.

“I couldn't be more happy with these guys,” Spavital said. “Just to see the celebration in the locker room, we've won three games here, you know you got the last one, next week, senior night. And I think these kids are gonna enjoy this one tonight and get back ready to work and see if we can stack another one with a tough Troy team coming in.”