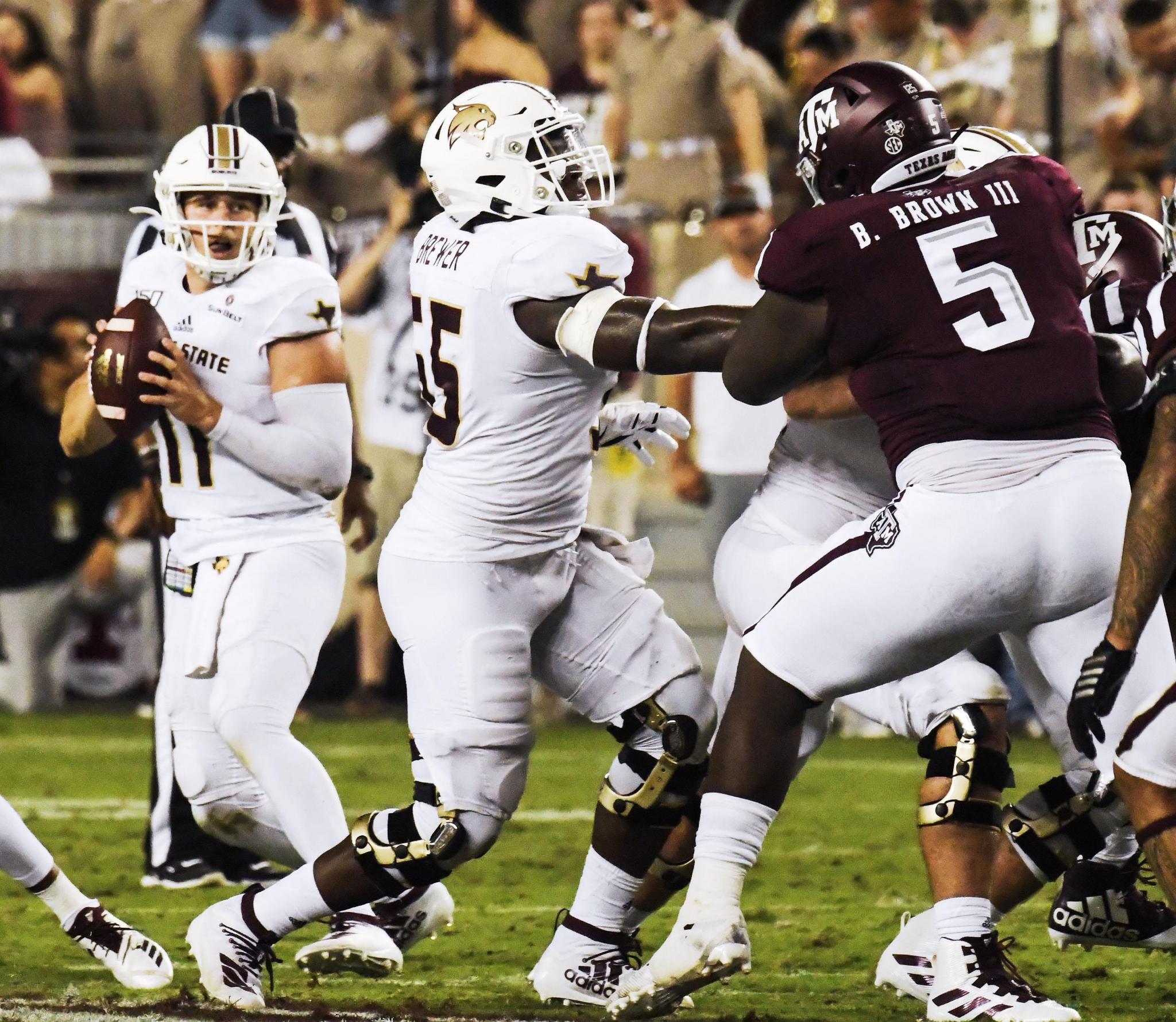 The Red Wolves had to change who they were.

Starting quarterback Logan Bonner had helped lead the team to a 2-2 record, but the redshirt junior was ruled out for the season after tearing a ligament in his right throwing hand. Arkansas State turned to redshirt freshman Layne Hatcher, a redshirt freshman transfer from Alabama, to take Bonner’s place.

Hatcher isn’t the same quarterback as Bonner, though, and head coach Blake Anderson adjusted the offense to suit the newcomer’s strengths. The Red Wolves increased their tempo and utilized Hatcher’s legs a bit more than Bonner.

In the team’s first game without Bonner, Hatcher threw for a season-best 440 yards and rushed a season-high nine times in a 50-43 road win over Troy. Last week, the team ran 83 plays in a 37-20 home loss to Louisiana, the highest mark this year.

Texas State head coach Jake Spavital now must do the same. Starting quarterback Gresch Jensen was sidelined during the third quarter of the Bobcats’ 24-14 home loss to Louisiana-Monroe on Oct. 10 with a concussion. The redshirt junior was still in concussion protocol on Tuesday and was questionable to be ready to play this week.

Regardless of if Jensen will be available, Spavital plans to start sophomore Tyler Vitt against the Red Wolves. The quarterback started in the team’s season opener against Texas A&M on Aug. 29 but was pulled in the second quarter and hasn’t started since.

“I’m confident going with Vitt,” Spavital said. “Vitt is the leader of that team. You know, I’ve said before that was the reason why we went with him at the beginning of the year.”

Vitt has yet to play in a full game this season, but in the three games he has seen the field, he’s thrown for 163 yards on 15-of-26 passing, two touchdowns and three interceptions while rushing seven times for 11 yards. Vitt’s practiced with the first unit throughout the bye week and Spavital believes he’ll be ready come game day.

“Tyler Vitt’s been practicing with a purpose and he’s been doing that for the past two months now. You know he’s still been preparing like he’s the starter and the kid’s ready and there’s no hesitation with us going forward with even holding the game plan back or anything of that nature.”

Spavital does have backup plans if things go awry with Vitt. Redshirt junior Jaylen Gipson, who’s practiced as a wide receiver for most of the season and has only played in Texas State’s game against SMU on Sept. 14., has taken reps back at quarterback with the second unit in practice this week.

Freshman Cedric Case, who has yet to take a snap, will also be prepared to play this week. Spavital said he hasn’t named Gipson or Case as the team’s No. 2 quarterback yet but would prefer to redshirt Case this year.

“Majority of the time, I’ve never been a part of losing a lot of quarterbacks, but you always have that contingency plan for where you’re at,” Spavital said. “So Jaylen has got plenty of reps and he operated well (Tuesday) running with the twos for the majority of it. Cedric Case has been sitting around, doing a lot of reps and been in the meetings. He’s not been doing scout team at all this year, so he’s ready to roll with everything. So I feel confident in both those guys executing the offense the way we want it to.”

No matter who the Bobcats roll out at quarterback, they’ll need him to succeed. The Red Wolves have given up 327.8 passing yards per game in their four losses this year, and held opponents to 264.3 in their three wins. The team currently ranks last in the Sun Belt, averaging 300.6 passing yards allowed per game.

“(There’s) a lot of moving parts, but the majority of where we’re at as a team, we’re healthy,” Spavital said. “And I think we’re ready to get this past week over with, we’ve been sitting on it too long. Let’s move forward and let’s go play Arkansas State, which is going to be a great team that we play.”