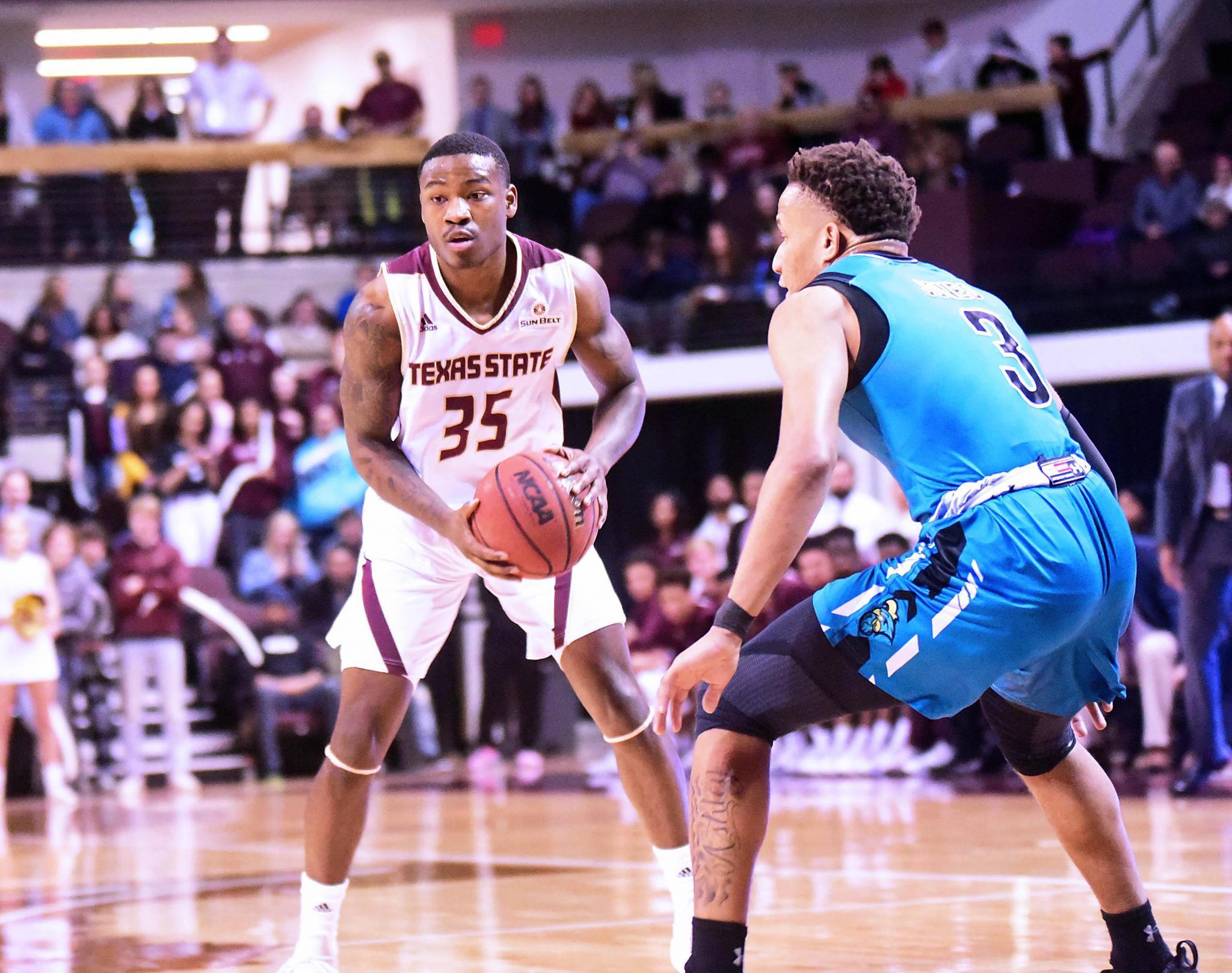 What happened to Jaylen Shead?

The point guard from Pflugerville chose to return to his home state nine games into his sophomore season with Cal Polytechnic State and walked on at Texas State to be closer to his family. After redshirting the 2017-18 season, Shead became a starter for the Bobcats, averaging 7.9 points and 4.3 rebounds and leading the Sun Belt with a 2.3 assist-to-turnover ratio for a team that won 24 games.

Shead was in line to receive a scholarship for the 2019-20 season, and a graduate assistantship under head coach Danny Kaspar the year after. But soon after the team lost its final game to Florida International in the CollegeInsider.com Tournament on March 23, Shead was forced to make another choice.

“My graduation plan at Texas State didn't come through as it had originally planned,” Shead said. “I had been talking with an academic advisor and I was supposed to graduate this past summer. But since that didn't happen, I had to find another way.”

Kaspar typically gives the team two weeks off after the end of the season. During that time, Shead sat down with his parents to decide what his next step should be. On March 28, the Daily Record reported Shead had entered into the NCAA transfer portal.

Shead said he initially received offers from mostly smaller schools. But none of them proved to move him closer to his ultimate goal.

“I want to play professional basketball, for sure,” Shead said. “That's any kid's dream. You know, you get to college and it's like, ‘Well, why stop here?’”

Shead considered forgoing his final year of eligibility and making the jump to the pro level. He signed with a FIBA-certified agent based out of Greece in April to help him explore his opportunities.

Nothing ever came of it, though. Figuring he was out of options, Shead asked Kaspar if he could rejoin the team late in the summer. Kaspar agreed, with the scholarship and GA offers still intact.

“For about a week this summer, we thought he was going to come back,” Kaspar said. “And then we learned Washington State made a call to him and all of a sudden, he was off and running.”

Kyle Smith was introduced as Washington State’s new head coach on March 27. His arrival was followed by an exodus of underclassmen. Of the 10 non-seniors listed on the Cougars’ 2018-19 roster, only five remain.

One of the departures was starting point guard Ahmed Ali, who left the program on Aug. 5 and joined Hawaii three days later. Smith began searching for a replacement who could fill the ball-handling and facilitating void. Smith’s assistant coach, Jim Shaw, saw Shead’s name still on the transfer list later that week.

Smith was impressed by Shead’s stats. Texas State was No. 138 last season in KenPom rating. Washington State was No. 207. The coach only needed to see two clips of the player before reaching out.

“What we're selling is an opportunity to perform on a very high level,” Smith said. “We're looking for guys with great attitudes, great work ethic and guys that really want to be here. And actually, we had five guys that signed or committed without ever taking an official visit. So I kind of like the guys that have a little chip on the shoulder, something to prove.”

Shead felt the Cougars presented the best opportunity for him and soon made the decision to leave San Marcos for Pullman, Washington.

“With Washington State, I think it's more of the preparation for the next level,” Shead said. “I think of all the places that I was looking at and that I was talking to, Coach Smith and the coaching staff here really have some connections and some knowledge on what I want to do with my life and my next step.”

Shead’s transfer was made official on Sept. 26. A new NCAA rule that was passed in April allows walk-on student-athletes to transfer and play immediately without requiring a waiver, meaning Shead will suit up for Washington State this season.

Smith said Shead’s adapted well since moving. Both player and coach are looking forward to making their debut with the Cougars.

“Jaylen's obviously had a very circuitous route to get to Washington State,” Smith said. “But I think he's kind of a story of perseverance and kind of self-determination that I think will bode well here and just kind of for our origin story. Hopefully, if we're able to get this program going on the right track, it'll be because guys like that that kind of opted in and said, ‘I want a chance.’”

Kaspar is still confident in the Bobcats despite Shead’s departure. Redshirt junior guard Marlin Davis is returning from a torn ACL and sophomore guard Mason Harrell has made strides in the offseason. Both players will compete to earn Shead’s leftover minutes.

Shead said he’s still in contact with many of his former teammates. He’s grateful for what Texas State did as a player and an individual.

“I’ll remember it as a time where I learned toughness and who I am and what I faced there,” Shead said. “Whether it was on the court, off the court, you know, I learned to be me in every aspect of life and who I am. And going back home for those two years really helped me grow as a person.”