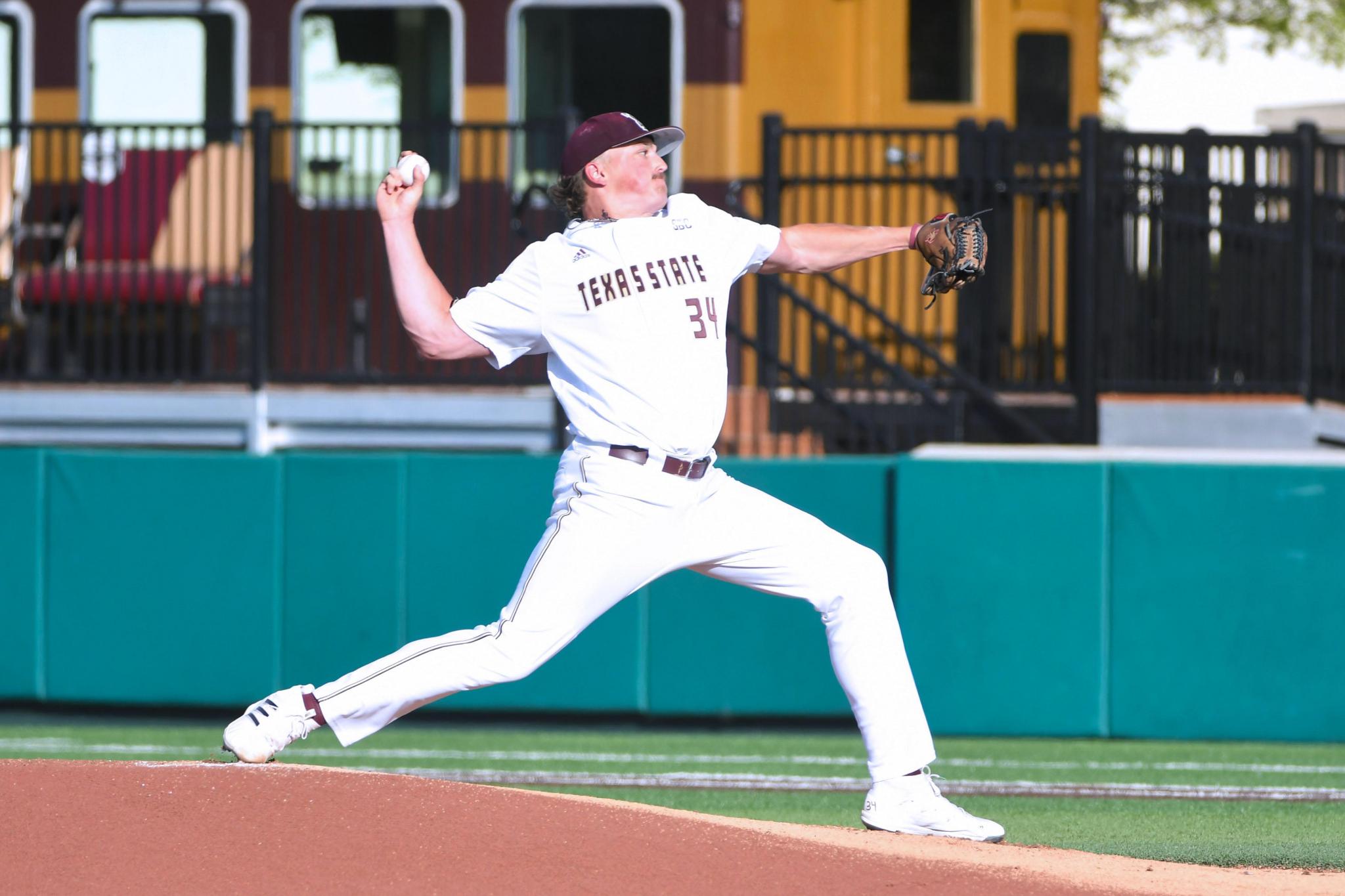 Texas State’s pitching rotation was in a near-constant flux in 2021.

Now, the team’s consistency on the mound has helped vault the program to the top of both the Sun Belt and NCAA.

“I think those guys are doing a really good job of controlling what they can control,” pitching coach Chad Massengale said. “Once the pitch leaves their hand, they’re totally out of control of what happens, you know what I mean? The guy can hit it, the umpire can call a strike, a ball or vice versa. There’s just so many things those guys have been so good at this spring, as far as just the mental game and being able to handle adversity.”

Despite retaining most of its arms from a year earlier, the Bobcats struggled to find consistent roles for its staff outside of their Friday starter, Zachary Leigh.

Zeke Wood, for instance, was brought in from North Central Texas College and immediately earned a spot in the team’s weekend rotation. He spent the first month of the season bouncing back and forth between the No. 2 and No. 3 spots with mixed results. He lasted just three innings in a home game against Houston on March 14, giving up five earned runs in an 8-7 loss.

Wood didn’t return to the mound during Texas State’s first series of Sun Belt play the next week, getting pulled from the rotation — the Bobcats were swept on the road by Little Rock. Instead, he started  in the maroon and gold’s next three midweek games, including matchups against Big 12 opponents in Oklahoma and Baylor.

The Paris, Texas, native had solid outings in all three games, surrendering just four runs across 12.2 innings. Texas State head coach Steve Trout inserted Wood back into the rotation on April 11 in a road game against Troy. Wood kept his spot for the rest of the season, finishing the year with a 3-5 record and a 4.45 ERA across 14 starts.

“I mean, everybody’s gonna fail, everybody’s going to struggle. But you know, you learn from that and coming back from it is the biggest thing,” Wood said. “Because a lot of guys, whenever they fail, it just dwells on them. And that just leads to more and more failure. But you know, the key is taking that and learning from it.”

The 2021 season was rough for all the Bobcats, not just Wood. The maroon and gold, who were voted to finish at the top of the Sun Belt’s West Division in the league’s preseason coaches poll, ended the year on a nine-game losing streak, going 21-36 overall and 9-15 in conference play. Trout sought out mental performance coach Brian Cain in the offseason, who helped build the team’s psyche back up. Wood credited Cain with helping him make some constructive changes while on the mound, like remembering to take deep breaths and “flushing” a pitch after it’s out of his hand.

As the team began ramping up practices in the fall, Wood began to stand out more. Massengale noted the 6-foot-4 right-hander has especially improved his fastball command. Trout said before the season that Wood had “turned a corner” during the time off.

Wood’s started in every series opener since.

“It’s what I always wanted. That was my goal when I came here, I wanted to be the guy,” Wood said. “I was very lucky to be under the wing of some of the older guys last year, especially some of the starters — Zach Leigh and then (Garrett Herrmann) was a Saturday night guy, too. And it was cool to see them work and to see them lead. And I think it really, really helped me for this year.”

Even with Wood’s emergence, Trout and Massengale still needed to round out the rotation this year, especially with Leigh’s departure.

Levi Wells was rated as the No. 91 recruit and No. 30 right-handed in the nation by Perfect Game when he came out of La Porte in 2020. He was a crown jewel for Texas Tech as the highest-ranked prospect of the Red Raiders’ class that year.

He made 17 appearances as a true freshman reliever — including one in the 2021 Lubbock Super Regional — going 1-0 with a 7.64 ERA in 17.2 innings with Texas Tech. After the season, though, Wells wanted to find a team he’d have a chance to play a bigger role for and entered the NCAA transfer portal.

On July 17, 2021, Wells announced his commitment to Texas State.

“It was tough to pick between schools that I wanted to go to,” Wells said. “But I would say staying more local to the house and allowing my family and some of my friends to be a part of this journey with me had definitely taken a role in why I came here. Also too, I came here because of the fact that I knew that the opportunity was going to be big … And being able to come and possibly have an impact. I wanted to go for the test, you know? I was up for it.”

Wells took the No. 2 spot in the rotation and has held onto it the entirety of the year. Both starters have posted a 6-1 record so far this season. They both rank in the top 10 in the Sun Belt in innings pitched, hits allowed, earned runs allowed, strikeouts and batting average against. Wood earned his first conference Pitcher of the Week award this season — Wells has since received the honor twice.

Wood, now a junior, had just two starts that lasted six or more innings in 2021. He’s tripled that total in 2022. Wells, now a sophomore, has had five this year. The pair of starters have set the tone for the rest of Texas State’s pitching staff — a unit that ranks third in the league with a 4.41 team ERA.

The Bobcats (41-11, 23-4 Sun Belt) need one win to clinch the conference regular season championship outright, taking on Georgia State (30-23, 15-12) in a three-game road series beginning on Thursday at 5 p.m. The team will need Wood and Wells to stay as consistent as they’ve been all season to bring home the trophy — and possibly more in the postseason.

“I think the most impressive part to me is just how they go about their business every day and their work ethic when they come to the field,” Massengale said. “It’s not like, they think they have it figured out, they come here wanting to learn every day, wanting to work every day and get better.”