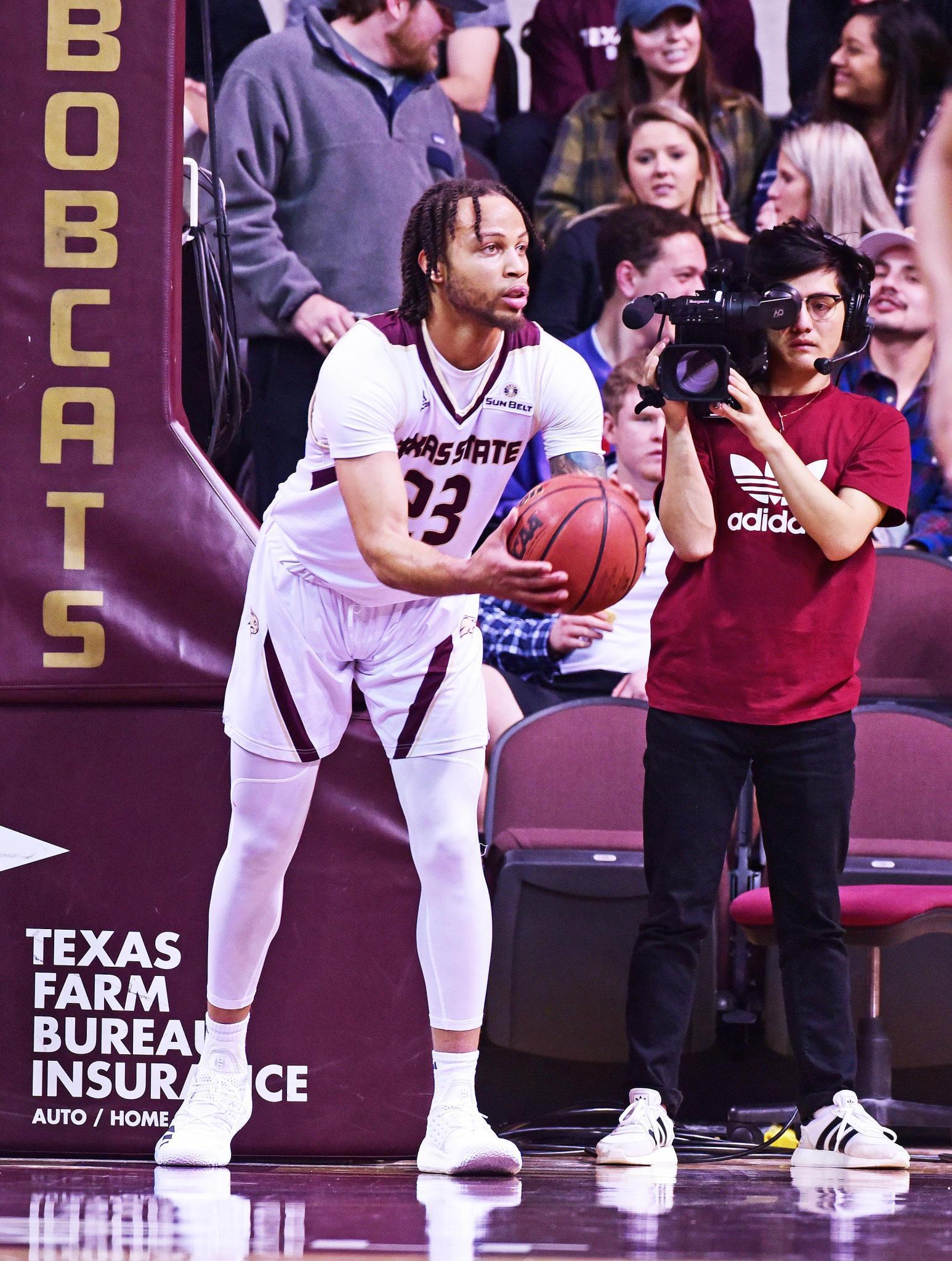 Alex Peacock opens up on his Texas State experience

“I stand with my boy jaylen and everything he says 100%” Peacock said in a tweet.

Peacock played under Kaspar from 2017-19 and started in all 32 games he played in the 2018-19 season. He spent the last year playing for APOEL B.C. in Cyprus and is currently a free agent.

The Daily Record interviewed Peacock over the phone on Friday about his experiences during his time at Texas State and his relationship with Danny Kaspar.

Daily Record (DR): What was your reaction when you first saw Jaylen’s tweet yesterday?

Alex Peacock (AP): “I knew it was coming. Jaylen talked to me earlier in the day and said he was thinking about doing it. And I told him, you know, 'Anything you've got to say' — I know Jaylen wouldn't lie. You know, I'm gonna stand by my guy 100%, as I said in my tweet, because nothing Jaylen said was a lie.”

DR: Were you the only one that knew it was coming or did Jaylen reach out to multiple players?

AP: “I was the only one. Me and Jaylen are pretty close.”

DR: One of the things that Jaylen said was he didn't want to speak up about it because he really didn't want to jeopardize his career. Did you feel the same at the time?

AP: “Of course, especially being — you know, you don't know what that is gonna bring, that type of thing. And I don't want something like that to jeopardize being able to play the game I love or the opportunity to be able to play professionally. So that was kind of the deal that happened in the past.”

DR: What makes it so difficult to bring up?

AP: “You never know how people are going to take it. And you know, you don't know how it's going to happen, especially with somebody like Coach Kaspar who's, you know, he's been here for a while. And if you speak out on somebody who's been here for years and people know him, people know him personally, things like that, you don't know what the reception will be and stuff like that. So you just, you kind of play it out and wait until things can't — there's a lot of things that can be, you know, misconstrued.”

DR: I thought something really interesting that Jaylen said was that Kaspar's comments happen so often on a daily basis that he became numb to it. How does that happen?

AP: “So, you know, you hear it the first time and you kind of brush it off. You hear it the second time, you're like, 'hmm.' And then the people who've been there for a while are like — you know, you see them and they don't react to it and you're like, 'OK, maybe I shouldn't react to it.' Then we talked about it, and they're like, 'Yeah, he does things like this.' And you just, basically, you know, become accustomed to it and you just kind of laugh, brush it off, laugh it off. Because 'What are you really going to do?' is what you think in the moment. Like, what am I really going to do?”

DR: Did you ever talk about it with anyone other than your teammates?

AP: “I eventually brought it up to my mother. You know, keeping it really close to the vest because you don't want something like that to get out from a third party. That would be terrible.”

DR: But never anybody else on the staff or the team?

DR: There was a former teammate of yours, Deris Duncan. He said (as first reported by KTSW Sports) that Kaspar’s words are “being twisted and used to get attention. When Kaspar would make comments we would laugh, Jaylen being one of the main ones.” What is your response to that?

AP: “I think that was very disingenuous, what Deris said. Because in that moment, yeah, we kind of smirk and we laugh about it. But like, it's like, an uncomfortable-type thing. You know, when you're in an uncomfortable situation, what are most going to do? They're going to laugh it off, shrug it off. And we've had conversations in the locker room between people and we talked about it and Deris has been part of those conversations before. I don't like that he thought that this was an attention grab because neither me nor Jaylen need any attention from anybody.”

DR: What are your initial thoughts on the statement that Director of Athletics Larry Teis put out?

AP: “That's what they're supposed to do when something like this happens. I agree. You know, this is something that can't really be handled internally because it's a touchy subject. So I think that's the right play and that's what they kind of had to do.”

DR: Does it bother you that it took as long as it did to get the statement out?

DR: There was also a report that came out today (from Rob Dauster of NBC Sports) that you guys are not the first ones to have experienced this type of treatment from Danny Kaspar or the University. There was a lawsuit filed by Basil Brown II in 2013 and he and his teammates experienced comments like, "You wouldn’t run from the cops in (their hometown) like that."

AP: “I think it's just making aware that — because here's my thing: I don't think Coach Kaspar is a racist. I don't think he's an all-out 'I don't like black people' racist. I think he makes racially insensitive comments that he doesn't know the effect of what they do and how they're received. I think he thinks he's just making jokes, which aren't cool. But at the end of the day, that doesn't excuse the fact that you can't do it. And so I think he's just gotten away with it for so long, naively or maybe not. You know, that's speculation. But he's gotten away with it for so long that he just he didn't think there was anything wrong with it and he continued to do it. I'm not surprised that more people have said these things.”

DR: Why do you feel like it's taken this long for somebody to check him on it?

AP: “Probably you know, because when you're in the moment, like I said, when you're in it, there's the fear factor of things coming back on you somehow. And then you kind of just move on and you forget about it, maybe, once you leave, you've got other stuff going on. And I think what really propelled Jaylen to make the tweet was, you know, (the protests against police brutality and racism in the US) that were going on and the fact that — you know, when stuff like this is going on in the world and you've got these college coaches who, to be frank, the majority of are white. And coaches, they go and sit in these black kids' living rooms and tell their parents you know, 'I'll take care of you, I'll do this and that.' And these parents trust these head coaches and we haven't seen many statements from these head coaches about things that are going on. And Jaylen, it was like a — not like a heat-of-the-moment because I think Jaylen has thought things out — the climate kind of called for it. And you know, like I said before, I'll stand behind any one of my guys and what they said. If it's true, it's true.”

DR: What was your relationship with Kaspar like before Thursday?

AP: “Coach Kaspar's not a bad dude, he's just — you know, he fed us after practice, his wife would make us desserts on our birthday. Like, he isn't a bad dude but there's just certain things that you cannot excuse and that are unacceptable. And those types of things — racial comments — aren't acceptable.”

AP: “I have not a clue (laughs). I honestly don't know. Because again, like, me and Kaspar's relationship was pretty good. But I have to stand up for what I know is right.”

DR: What would be the best-case scenario for you and Kaspar?

AP: “I mean, I just hope that he sees that — I hope for him, that he wouldn't be mad at us for saying that this wasn't right because, you know, as everybody can see, there's things you can't do. So I think, I hope that he would understand. But you know, you never know. That's what I would hope, I would hope that he just sees the error in his ways and he can fix them. That would be the best-case scenario to me.”