Above is Jennifer Miller, who was killed in a car accident last June in a collision with Sgt. Ryan Hartman, an officer with the San Marcos Police Department. Photo courtesy of Pamela Watts

You may have seen a banner displayed around San Marcos proclaiming “no justice for Jennifer Miller,” who was killed in a car accident last June in a collision with Sgt. Ryan Hartman, an officer with the San Marcos Police Department.

The banner is posted as often as possible by Miller’s life partner, Pamela Watts, who has been distraught since a grand jury decided that Hartman’s only charge for the fatal crash was a citation for failing to stop at a stop sign.

She hopes that the banner might share the story of how the criminal justice system handled the death of her beloved partner.

“I’ve gotten no justice at any turn,” Watts said. “Haven't gotten a fair voice. I had a pretty idealistic view of law enforcement because my brother has been in it for 35 years and he is one of the good guys. Now I get it, our system allows a District Attorney to be God and it's wrong.”

The collision happened on the afternoon of June 10, 2020 in Lockhart when Hartman, who was off-duty, was traveling eastbound at the 2200 block of Maple Street and Watts and Miller were traveling southbound in the 1300 block of South Cesar Chavez Parkway.

Lockhart Police Department’s investigation recommended a charge of criminal negligent homicide. However, after a grand jury reviewed the charge and returned a no bill, Watts’ only recourse was a civil suit where she could file for damages for her sustained injuries, although that is not the justice Watts wants.

“This thing has really destroyed her life,” Watts' lawyer Justin McMinn said. “Nobody wants to go through this. She doesn’t feel like she is getting any justice for what happened.”

Watts wants systemic change in the criminal legal system to empower victims to speak at grand juries and to rein in the authority of District Attorneys to present evidence without the oversight of an audience. She says she can’t be sure that all evidence was presented to the grand jury because no one representing her or her late partner could be in the room.

Some relevant evidence, like phone records, had not been made available by the time the grand jury was held.

According to Hartman’s deposition, police reports and forensic evidence, Hartman was driving 16 mph over the 30 mph speed limit on a partially gravel road with an open container of alcohol that was ¾ empty, talking on the phone, and he failed to stop at two stop signs before colliding with Watts’ vehicle. Forensic evidence showed that Hartman was not attempting to brake the vehicle when the collision occurred. 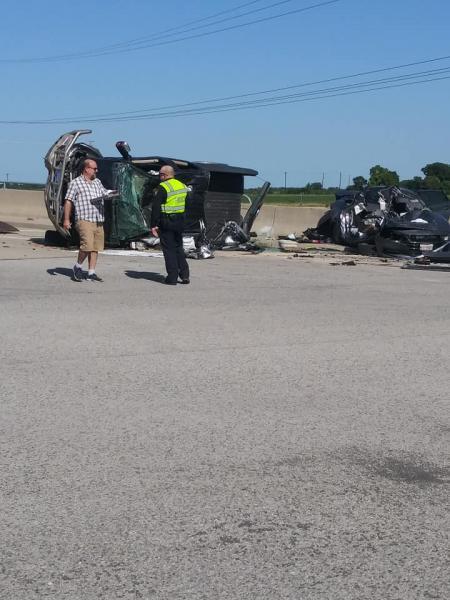 According to the incident report, Hartman denied consuming any alcoholic beverages when asked and refused to take a blood alcohol test on scene; he was detained until a search warrant could be obtained on suspicion of driving while intoxicated due to the open container. Hours later no alcohol was detected.

“I did have concerns that if Ryan wanted to be cooperative as he said he wanted to be, this was an odd response to my request, if in fact Ryan had not consumed any alcoholic beverages prior to the crash,” wrote LPD Officer Daniel Williams in the police report.

In his deposition, Hartman stated he put the Dos Equis can in his truck a day or two prior and he had not consumed any prior to the collision.

“I’ve never been involved in a crash like that before where someone lost their life and another person’s seriously injured, and it’s my fault,” Hartman said in his deposition. “And so I knew that a lot of trouble was coming down on me; I was going to get sued pretty badly. And I think it was just no. I was ready to go home.”

When McMinn asked if he thought it might raise suspicion to refuse, Hartman said, “It may have. I just don’t know. Obviously the can there looks bad. It looks suspicious. But I wasn’t drinking.”

McMinn asserted that in the several hours it took to acquire a search warrant, Hartman would have been able to metabolize the less than 24 ounces of beer in the cup holder.

“Hartman did not cooperate with the investigation of his alcohol consumption and forced the officers to get a warrant to get his blood alcohol content,” McMinn wrote. “This occurred hours later and crucial evidence was lost to prove he had been consuming alcohol prior to the collision … Jennifer Miller lost her life in this crash, there needs to be some degree of accountability for Ryan Hartman … to date he has not been issued any citations and we find that unacceptable.”

Watts says as an officer certified to conduct field sobriety tests, Hartman knew the protocols that follow refusing a blood draw at the scene.

"He knew they were going to take him into custody," Watts said. "He knew they would have to get a blood search warrant. He knew that would give his body the opportunity to metabolize whatever blood evidence there was."

LPD Officer Andrew Richey wrote in the police report that in his interactions with Hartman, there were no observed indicators of intoxication observed or odors of alcoholic beverages.

Still, LPD charged him with criminal negligent homicide but it was ruled no bill by a grand jury, meaning they did not find probable cause, beyond reasonable doubt for the charges.

Under Texas law, a person acts with criminal negligence when he or she ought to be aware of a substantial and unjustifiable risk that the circumstances exist or the result will occur. The risk must be of such a nature and degree that the failure to perceive it constitutes a gross deviation from the standard of care that an ordinary person would exercise under all the circumstances as viewed from the actor's standpoint.

“It was the expectation of the Lockhart Police Department that Mr. Hartman would be charged with criminally negligent homicide,” said a representative from the City of Lockhart. “The expectation was that the speeding, running the stop sign, and potential other factors would be elements of criminal negligence, and the Lockhart Police Department was directed to present this case directly to the Bastrop County District Attorney, as special prosecutor. That office then submitted the case to a grand jury, but rather than indict Mr. Hartman for criminal negligence, it elected to no bill him.  The nature of grand jury proceedings prevents us from knowing any more detail about the reasoning for the no bill.”

Watts says she's confused by the grand jury's decision and would like to know what exactly it was told.

“I would very much like to know what [the grand jurors] were told,” Watts said. “There is just such a mountain of evidence that I am perplexed, how this can simply be swept under the carpet, and this man can go back to work and stand in judgment of others. How can he pull anybody over with an open container of alcohol with a straight face and give them a ticket?”

McMinn believes that if Hartman had taken the blood alcohol test on scene and had alcohol in his system, that would have been enough to prove negligence.

The Caldwell County DA Fred Weber recused himself at the request of Watts because he knew Hartman, according to Watts, and appointed Bastrop County District Attorney Bryan Goertz as a special prosecutor for the case.

The Daily Record made several attempts to contact Goertz for comment and did not receive a response.

“The grand jury is a sealed process,” Watts said. “Goertz has complete autonomy. He doesn’t have to answer to anybody, and that is wrong. I think we need legislative change in this country, that allows victims to speak before a grand jury renders a verdict. Victims should be allowed to be a part of that process. Basically [District Attorneys] can steer it in whatever direction they want.

“There is little doubt in my mind that what happened here was, I’m sure they decided that Ryan’s a good guy, and he did a terrible thing, but it didn’t rise to legal charges,” she added.

Although the grand jury was private, Watts wrote an impact statement, hoping it would be included in evidence.

“It is an impossible task to put into words how much my life has been impacted by the loss of my committed life partner Jennifer Miller … We had a lifetime of experiences ahead of us, but for the reckless behavior of Ryan Hartman, I’m left with a badly damaged body and mind, to wrestle with what could have been for the rest of my life,” wrote Watts.

Now, Watts has filed a civil case, but she has to wait until January 2022 for the case to be heard.

“That’s how long I have to have this hanging over my head,” Watts said. “This is not about money for me, this is about justice. He simply does not deserve to wear a uniform. There are a lot of fine young men out there protecting the general public that do live a legal life. This dude crossed the line and he quite frankly nullified himself, in my opinion as a police officer, based on his deposition and his action at the scene, refusing to cooperate with police.”

She offered a settlement to Hartman asking him to give up his badge and pay for her legal fees but he declined saying law enforcement is his only means for supporting his family.

Hartman’s lawyer Jason Wilkes would not comment or provide an interview with Hartman regarding the case due to the ongoing litigation.

Hartman has been a peace officer with SMPD since 2007. He was placed on administrative leave with pay on June 12, 2020, and was reinstated by SMPD Chief Stan Standridge on Nov. 30, 2020, to allow for the prosecutorial review and to allow the criminal justice system to work, according to the City of San Marcos.

Standridge called Watts after the no bill to let her know Hartman would be returning to duty. He wrote an email to city council on April 2 after her sign appeared around town explaining his obligation to return him to duty.

“There is no civil service rule that was clearly violated by this off-duty conduct that was not criminally prosecuted,” Standridge wrote. “Consequently, I conferred with HR and Chief Stapp and returned Ryan to work, but only after informing the survivor. She is aware of my legal constraints, but she is rightfully upset and still suffering from long-term injuries. Because there is ongoing litigation, I believe the department should remain silent on this issue and let the survivor express her honest feelings.”

Watts appreciated the call from Standridge and says she does not have anything against SMPD except that it still employs Hartman.

“He basically got five, six months vacation paid leave to sit on the sidelines until it was rendered a no bill. I want justice for Jennifer and I’m not going to stop until I get it,” Watts said tearfully. “He certainly removed an angel from the Earth.”