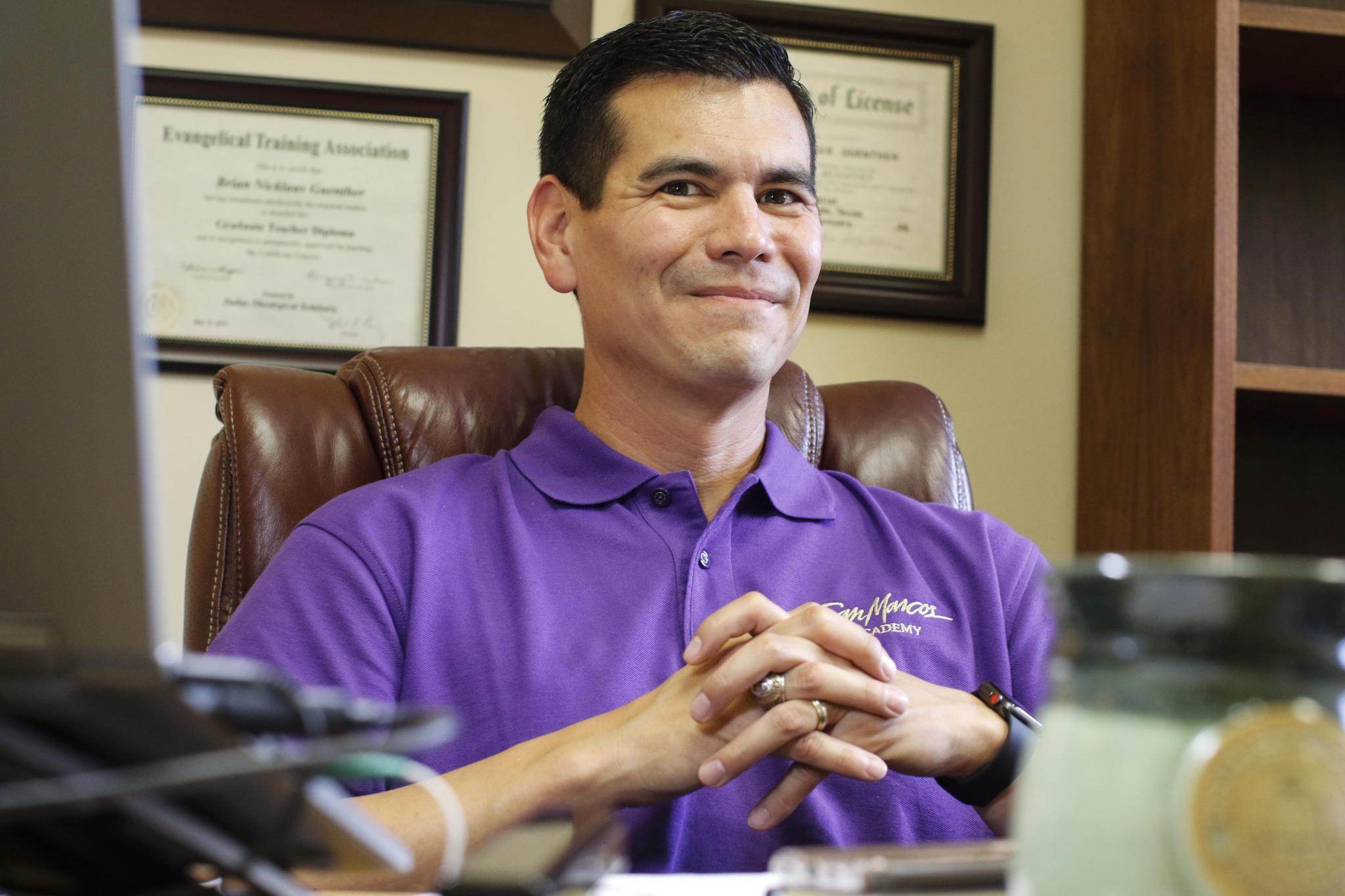 The next generation of leadership at the Academy

He looks way too young to be president of San Marcos Academy. My previous experience with the Academy involved Wendell Heathcock, Robert Rice, Jimmy Scott and, in my mind, the personification of the Academy, Dr. Jack Byrom. Five minutes into this interview, it became apparent that Brian Guenther has been destined for this job since his graduation from Mary Hardin Baylor in 1999.

I began the interview, as I usually do, “tell me about yourself.”

Guenther began at the beginning.

“I was born in Denver, Colorado, moved to Houston at an early age, lived there until I went to college at Mary Hardin-Baylor. Met my wife there and married the week after we graduated from college.

“I went to work at a Christian camp on Lake Travis as director of education and water safety. In school, I did education and in summers, I did the swimming pool, life guards, etc.”

Following his stint at the camp at Lake Travis, Guenther was called to a Baptist church in Kingsland, Texas, where he served for four years. I used the term “called” advisedly, as the reader will discover later in this article.

“What were your duties at the Kingsland First Baptist Church?” I asked.

“I was the youth minister, the recreational director and the contemporary worship leader,” Guenther said.

“Tell me about contemporary worship,” I implored.

“It was an early morning – 8:30 – service. I had a band and so, I did music with guitar; led the singing before preaching.”

Moving right along, following the contemporary service, he donned his hat as the youth minister — coordinated all the Sunday Schools. And on Wednesday night, conducted planned youth activities.

It occurred to me that his job description most likely included the phrase: “and other duties as required,” a common phrase in all military job descriptions.

After four and a half years at Kingsland, Guenther and his wife took a year sabbatical, during which they considered moving to San Marcos. Praying about it and considering all the factors involved, San Marcos was the next call, with the God-directed purpose of starting a new church.

In 2004, River Stone Community Church emerged from this call.

“Currently, they meet at Crockett elementary,” Guenther responded to my question.

I implored him about what motivated him to undertake this difficult task, when he had credentials and experience in great demand at prosperous, established and flourishing churches?

“A very good friend of mine, Jason Bollinder, was interested in starting a nondenominational church in San Marcos. He saw a need and asked me to participate in the project. We had been good friends in seminary and had maintained contact ever since.

He had been a youth minister in Wimberley’s First Baptist Church. As a result of several meetings with the association of churches here in San Marcos, he determined that there was a need for a church, aimed at the college students.

“That was a major motivation,” Guenther said. “To come here and reach a population that wasn’t being reached or they were choosing not to be reached.

“Our first location was in the Crestwood Shopping Center, which I believe is now the Wild Horse Saloon.”

Then the River Stone Community Church moved to the building next to the dance studio on the square. Rapid growth forced them out of that location and the next move put them on campus at the Alkek Library, then to Centennial Hall on campus and by then the church had begun to attract young families with children. After a stay at this location, the campus could not continue to rent the facility to River Stone. So Travis Elementary School became the next home for River Stone.

“I became involved in education at this time and the congregation could not pay my full salary, so I was doing fundraising,” Guenther revealed. “I was working construction and other jobs to supplement my income.”

His next revelation would have complicated life beyond reason for most.

“At this time, 2005, my wife delivered twin girls and we adopted a child from Haiti. So, realistically, I needed more income than I could muster in River Stone.

“I received a call from a young school with a Christian base, called The Masters School. I was asked if I would be their chaplain and I said yes. I received $50 for my services and I didn’t have to do construction that day.

“I was then hired by the Masters School as a teacher. I had fallen in love with the kids, the environment and the idea of teaching was intriguing and challenging. Ten years out of college and I had not used my education degree.”

At the Masters School, Guenther was the music teacher. He was also pastoring at River Stone doing “other duties as required.”

His next benchmark on this remarkable journey was when he was asked to become the assistant principal of the Masters School. In this position, he had to give up construction; however, he continued to volunteer at the River Stone Church as a teaching pastor, and he was in the preaching rotation.

As a matter of self-education, I asked Guenther to define a teaching pastor.

I don’t call myself a preacher,” he replied. “I don’t preach very well, but I teach really well. When I preach, I use a lot of history; I use maps; definitions of words. My sermons are more teaching style than preaching style.”

“So,” I asked, “what’s the difference: preaching v. teaching?”

“My friend, Jason, was an excellent preacher,” Guenther said. “He dwelt on the point of the scripture and you went away knowing exactly what the sermon was about. A teacher will spend time on the historical times and the meaning of the scripture in the context of those times.”

After about four years, Guenther became Headmaster at the Masters School, and that just about eliminated the outside jobs. At this point, I questioned whether he knew the history of the school. Indeed, he did and that is a story of Christianity, dedication, determination, sweat and innovation.

“At that time, I was carrying through the accreditation process,” Guenther said. “It was during this effort that I learned that the school leaders must have advanced degrees in education for the school to earn accreditation. That’s when I began the doctoral program.

“It was about this time that we thought River Stone had developed adequate leadership and it was time for us to move on. We went to Christ the King church in New Braunfels. It is an Anglican church, quite different from the community church in many ways.”

To my question about how do they relax and create fun for the family, Guenther responded, “We are a family that loves to camp, hunt and be out with nature, whether that is on an ocean cruise, or in the woods with a tent and a sleeping bag.”

It is already apparent that Brian Guenther is on the fast track to the top. So, I wondered, “When did you come to the San Marcos Academy?”

“In 2015, Jimmy Scott called me and asked me to come and direct the effort as the Academy added the sixth grade and to direct the program to add grades all the way to kindergarten,” Guenther said.

“I was principal of the middle school and the elementary school. And in May of this year, I was appointed Academic Dean. And in the meantime I was in the church process of becoming president. I will assume the office of the president Aug. 1, 2018.”

“So, what is your vision for the Academy in the coming years. It is 111 years old, so what do you plan for the next 10 years?”

“Filling the shoes of Jimmy Scott will require me to grow about 10 shoe sizes,” Guenther said. “There is a tremendous legacy here. More than 100 years. There is history; there is change; there is growth; the students that have gone through here. It is a major challenge.

“It is all a part of ministry. We are still a part of ministerial leadership, a means of preaching, we just get to do that with students. My prayers are always that they go out from here and change the world,” Guenther said.

“I don’t deceive myself into believing that I can keep up with and understand technology as you have just presented it. But what I can do is teach ethics; I can teach responsibility; I can teach students stewardship.”

“So much has changed, so rapidly. A student here will not likely ever find himself or herself doing manual labor, especially for a living. So, how do you teach the discipline required of hard labor; staying on the job, regardless,” I posed.

“I believe in mission trips. Not necessarily taking students to Port au Prince Haiti for a month, but that is a possibility and it works. But we have mission opportunities all around us,” Guenther said. “Students who don’t have food when they get home from school; students who don’t have funds for school supplies, winter clothes, food every day.

“We want the students to get outside the comfort of this campus and experience the real world in a way that makes a difference. We want students to change the world, because they see the need.”

San Marcos Academy is in the hands of a young man who seems to know nothing but success. Consequently, failure is not acceptable. He is a person of vision, with the intellect and energy to make it happen. We will see a continuation of excellence in that institution.