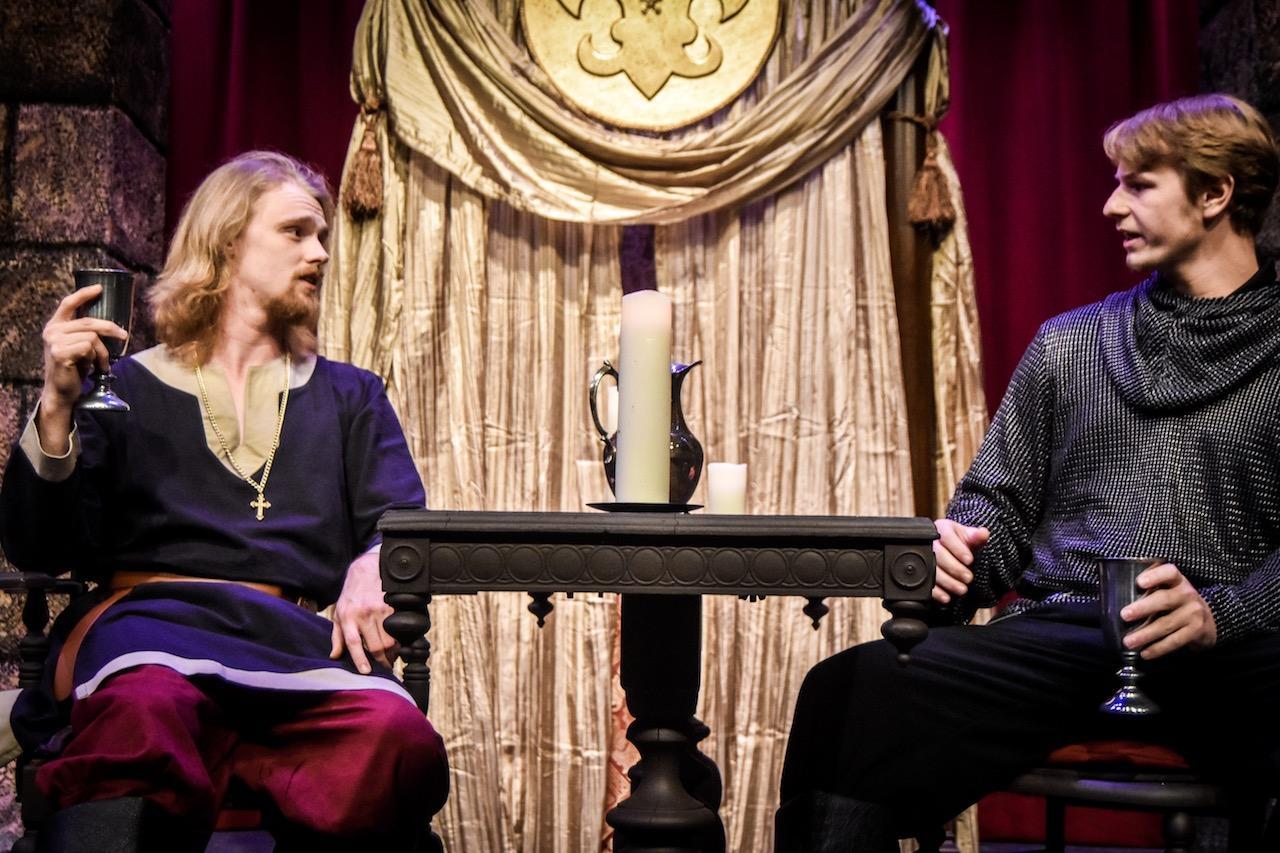 James Lindsley as French King Philip squares off with Blake Latz as Richard the Lionheart in the  production of "The Lion in Winter." Dr. Rodger Marion, the Wimberley Players' dramaturge and current assistant director of the show "The Lion in Winter," works to ensure that plays performed by the Wimberley Players are authentic to the customs, costumes and language of the time periods they take place in. Photo by Mary Rath

It’s action movie night and two characters are setting up for sword play. You hear that electrifying, shivery, metal-on-metal "zzwiing" and you know the battle is on. Wait a minute though, swords don’t "zzwiing" when pulled from their scabbards. Scabbards are sheaths of leather and drawing steel across them makes no noise.

Meet Rodger Marion, PhD., assistant director and dramaturge for the current Wimberley Players production of "The Lion in Winter." Did you know that there is an entire theatrical profession that works with the director and other creatives to stage performances that are authentic to the period, locale and intent of the playwright? They’re called dramaturges and Marion is one of them. Dramaturges work with costumers to dress actors in period dress, check the set for anachronisms and make sure props and weapons are correct. They give insight into language and advise about makeup and hair. They also reveal the ways a scriptwriter might play fast and loose with reality, as in the "zzwiing" example above, in order to spin a rich and compelling story.

Considerably less well-known than the namesake of “Adam Ruins Everything,” Dr. Marion’s research is, like the man, friendly, informative and thorough.

“Richard Goldman’s script takes place in 1153 and imagines a family of people who actually existed: Henry II, Eleanor of Aquitaine, Richard Lionheart, Geoffrey and John. Even though the script is in English, the characters would have spoken French. And while Henry is historically regarded as the first Plantagenet king of England, he did not know it, as the word Plantagenet was not attached to him or his family in his lifetime,” Marion says.

“The play places Christmas in a modern framework. Trees and presents are more the product of the 19th century. In the 12th, gifts might be fruit or nuts and, since no paper was available, a gift might be in a wooden box tied with ribbon or string. In the 12th century, Christmas was celebrated over a two-week period with many gatherings and church services. Henry and his family seem to ignore the religious components of the season.

Here are some other fun anachronisms:

Just a tiny sampling of his notes, Dr. Marion’s work as a dramaturge provides the context for the playwright’s script and prepares the actors to deliver the most believable performance possible. He’s been active with the Wimberley Players as assistant director and dramaturge for four recent productions, has directed, designed video, and on rare occasions, appeared on stage. He produced and directed two feature-length motion pictures filmed totally in Wimberley: "Impasse" (2011) and "Nudged" (2015).

"The Lion in Winter" will run through Dec. 2 at the Wimberley Playhouse, 450 Old Kyle Rd. For more information go to Wimberley Players' website.